Posted on January 1, 2017 by Sam Sewell-Peterson

Here are the very best, and the very worst films I’ve seen this year. MOONLIGHT, LA LA LAND and MANCHESTER BY THE SEA aren’t out in the UK for another few weeks, so don’t look for them here. Absent also from the best are most of the blockbusters, and none (bar animation) rank among my best. No not even ROGUE ONE quite made it (FANTASTIC BEASTS and DOCTOR STRANGE were better anyway). So without further ado…

5. ADULT LIFE SKILLS A lot of people will have missed this little gem. It’s charming and genuine and doesn’t sugar coat how profoundly losing a family member affects people. There are cute little finger puppet film pastiches scattered throughout, but the focus is always on telling an honest story of real, rough-around-the-edges people going through difficult times.

4. HELL OR HIGH WATER Between black-as-pitch jokes, a humanist worldview and stunning scenery, David Mackenzie’s contemporary cowboys ‘n’ outlaws allegory is a bit of a stunner. Jeff Bridges gets to play a little with one of his go-to personas and Chris Pine shows his hitherto untested range as an idealistic criminal. 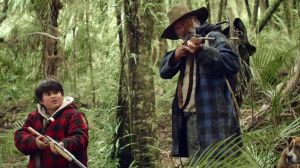 Hunt for the Wilderpeople (2016): Vertigo

3. HUNT FOR THE WILDERPEOPLE A very New Zealand take on a road movie. It’s keen to be self-deprecating but also shows great pride in its setting and is director Taika Waititi refuses to stigmatise those with difficult upbringings or unconventional lifestyles. What could have been a heavy social drama becomes uplifting, bittersweet and hugely enjoyable. Sam Neill and Julian Dennison make for a perfect pairing.

2. NINA FOREVER Another little indie that deserved a wider release, but may well become a cult classic, is one of the beautiful and creative meditations on grief I’ve ever seen. Abigail Hardingham and Cian Barry are talents to watch, as are the Blaine Brothers who thought up this whole sexy, funny and twisted comic-romance-horror affair. It profoundy affected me and may well stay with you too for a long time.

1. ZOOTROPOLIS The best script of the year and perhaps the film that captured the mood of early 2016 the most succinctly (sadly things got even worse as the year went on) came from Disney, and followed a bunny in a uniform. It’s one of the best-looking things Disney has ever produced, and has plenty to keep kids glued to the screen, but it also has more food for thought and enlightening real-world commentary than any other major studio release this year.

5. GET A JOB I’m not surprised it took three years for this to be released straight to video in most countries. There’s probably an interesting film to be made exploring the challenges of a graduate wanting to break into online content production along with everyone else if his generation, but this is not it. The characters are repellent or dull, the jokes baseline and everything about it smacks of “that’ll do” filmmaking.

4. SUICIDE SQUAD I think I said in my original review that this wasn’t quite as bad as DC’s other 2016 superhero movie. Having seen it again, I take that back. On some very basic filmmaking levels (sound, editing, acting) SUICIDE SQUAD is worse. It’s also so miscalculated and stylistically mangled, generic and boring following an ad campaign promising vibrancy and anarchy. But it retains the #4 worst spot on this list slightly above the next movie for one reason above all others.

3. BATMAN V SUPERMAN: DAWN OF JUSTICE That reason is that Suicide Squad cost around $175 million. BATMAN V SUPERMAN cost at least $250 million. Hollywood filmmaking can’t carry on like this; it can’t keep exponentially growing outwards and leaving a howling void at its centre. I don’t mind mega-budget blockbusters when they justify their existence, but when they’re this wasteful, this dour, monotone and downright depressing, when I’m looking to get nearly three hours of my life back I have to wonder when it will end.

2. GRIMSBY Sacha Baron Cohen is perhaps one of the best out there at mean comedy. In addition to being mean though, he’s usually entertaining and with a point to make. This is him on autopilot, taking jabs at easy targets, putting the bare minimum of effort into creating a work made up only of ugly stereotypes and doing horrible things with elephants. it’s even worse when it tries to be an action movie or be uplifting. Cohen’s career choices can be hit-and-miss, but what was Mark Strong thinking degrading himself to this?

1. THE DO-OVER Stop giving Adam Sandler work. Stop encouraging him. He needs to understand that he can’t keep getting paid for bringing us cinematic detritus. Netflix actually gave him a four film deal of which this is only the second (imagine where he’s going with the other two). Sandler of course plays his idea of the coolest guy in the world and David Spade gets all the jokes Sandler thinks he’s above. Lowlights include gags about how scary gay guys are, how dementia is snicker-worthy and how the easiest way to make an impression on a woman is to hit her with your car. You actually feel ashamed of yourself for sitting through the whole thing, and Sandler should feel likewise for making it.

I already anticipate next year to be a far better one at the movies. Judging by this year’s releases from Warner Bros, WONDER WOMAN could go either way, but I do sincerely hope it turns out great. GUARDIANS OF THE GALAXY VOL. 2 looks like a safer bet, and even the risks like a long-awaited TRAINSPOTTING sequel promise to be interesting at the very least. For me I’m most looking forward to WAR FOR THE PLANET IF THE APES, which follows on from one of my absolute favourite films of 2014, and of course STAR WARS: EPISODE VIII, helmed by one of my all-time favourite directors Rian Johnson. Happy New Year everybody. SSP