Posted on January 6, 2017 by Sam Sewell-Peterson 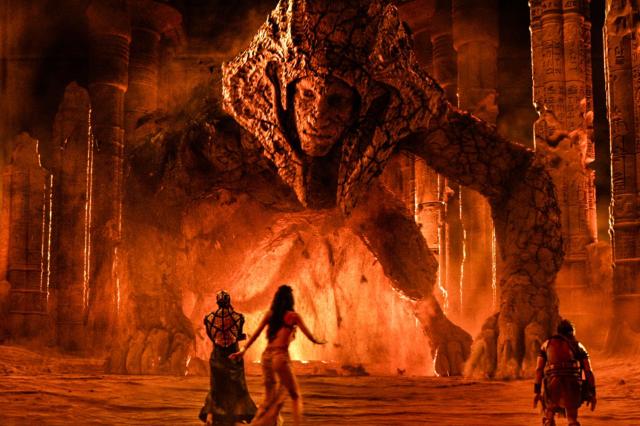 I have a confession to make…I actually quite like GODS OF EGYPT. I enjoyed watching the film that made Alex Proyas aggressively lambast film critics for not giving him a chance, pretty much from when the first trailer dropped. I can see it’s a flawed work, but it’s flawed in fascinating ways.

Gods of Egypt could be called just about anything but dark; the brief given to everybody who worked on the project was “Planet Egypt”. This shows. Think of this like the 60s Greek mythology adaptations like JASON AND THE ARGONAUTS but dipping into a different culture and adding a liberal splash of FLASH GORDON. I know there were complaints of whitewashing from the off, and while I can understand this criticism it doesn’t bother me anywhere near as much as it did in Ridley Scott’s EXODUS, which was a fairly serious dramatic re-telling of a religious story firmly rooted in a real time and place, where nobody should have been white. Here the story is nominally Ancient Egypt-set, but it’s a romp, it’s a colourful fantasy where real-world logic rarely intrudes.

Whatever it is, the film is jam-packed with ideas. We see Ra’s (Geoffrey Rush) space-barge dragging the sun over the side of a flat earth shortly before its pilot pauses to battle a space monster; then there’s the sight of Set (Gerard Butler) riding to war in a chariot pulled by flying scarabs and a god being mobbed by the spirits of the dead as she falls into a dark, swirling vortex the moment a protective charm is removed. The film’s batty internal logic works; if gods lived among us they would do everything grandly and opulently, humanity would be regarded as little more than a nuisance.

I was generally impressed with the designs of the sets and of the creatures (the sphinx above is a particular highlight), though I question whether the gods’ true forms should have been bio-mechanical, because as soon as you have living metal titans duking it out on top of a pyramid, your thoughts tend to jump straight to TRANSFORMERS. Nikolaj Coster-Waldau and Butler don’t seem to have bothered changing characters since the last “historical” epic they took part in, and don’t exactly stretch themselves, nor does Chadwick Boseman’s putting on a plummy English accent as he contemplates the meaning of a head of lettuce, not that this material ever asks them to. Also, after all these years, is the use of forced perspective really the only way to have different scales of character appearing in the same scene? The gods and the mortals never look like they shared the same soundstage, never mind the same world.

The script is appropriately naff for a high-concept B-movie; somewhere between Tolkien and Shakespeare but more cloth-eared (“Every night the battle between chaos and creation must go on, otherwise the world will be destroyed”). This isn’t really a criticism, in fact it’s part of the entertainment value. I don’t really understand why Proyas got so defensive over the negative reviews the film received. It’s not high art whatever the director thought, but I think it will have a life as a bit of a cult gem. There’s nothing wrong with producing trash if it’s fun, if it’s memorable, and I don’t think you should be ashamed of every now and then turning out a product like this. It’s less problematic if you treat is as pure escapism and far more enjoyable if you switch off your brain and have fun. SSP