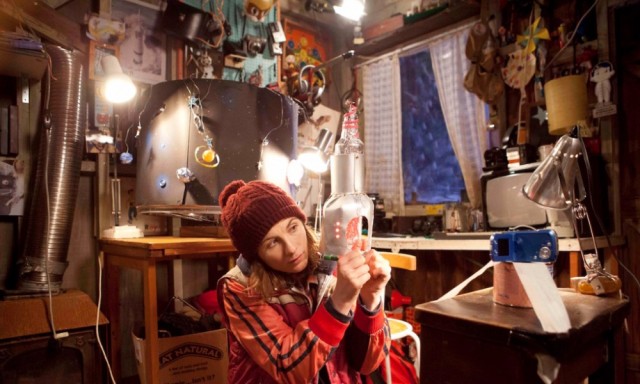 I forewarn you that this one might be an uncomfortable watch for any adult in a difficult transition period, especially if they’re watching it with their parents and especially especially if they still live with them. ADULT LIFE SKILLS is also funny, soulful and comes complete with a very distinctive style.

Following the untimely death of her twin brother, Anna (Jodie Whittaker) moves into her mother’s (Lorraine Ashbourne) garden shed and reverts to a perpetual life of daydreaming and DIY movies. Her family and friends urge Anna to move on with her life, but will she ever be able to overcome her grief? Being forced to babysit a equally imaginative kid named Clint (Ozzy Myers) going through his own family crisis just might be the boost she needs…

It really has been an abysmal year for Hollywood blockbusters, but conversely it’s been a pretty great one for the British indie, and especially those tackling the very difficult subject of grief. Much like the similarly-themed NINA FOREVER, Adult Life Skills approaches loss with a bittersweet wryness. It doesn’t trivialise losing someone important or downplay the grieving process, nor does it shamelessly exploit the subject for tears. It just acknowledges that such incidents affects everyone differently.

There are some great low-key one-liners scattered throughout the film. On arriving to work at a grotty children’s activity centre and being immediately greeted by a member of the public proffering a used condom, Alice Lowe’s character lets out an almighty sigh and responds “Sometimes I wish the Suffragettes hadn’t bothered”. Anna brushes off a clumsy attempt at a flirtatious advance with “I’ve still got spots and I’m getting grey hair as well!”. Whittaker’s Anna is compellingly unglamorous, completely real. A running gag has her running out of clean clothes and having to turn up to work in a bizarre assortment of whatever she has found lying around. She may well become a bizarre fashion icon for the film’s cult followers.

The brilliantly stoic young Clint confides to Anna that “I want to be like you when I’m older…sad and angry all the time”. Later his wisdom beyond his years helps her begin to accept her brother’s death: “The sad bit’s he’s dead, not talking about him”. It’s a master stroke that the lost twin was the funny one, the one with drive (we see him played by Edward Hogg take the lead on all their videos). Anna balanced them as a pair with her thoughtfulness and practicality but finds herself adrift without the missing element. She has become half a person.

Anna’s mum’s attempts to get her to overcome grief when she isn’t nagging her about getting something out of life is unhelpfully pointing out that “It’s still your birthday you know” when her daughter dreads marking another year without her twin brother and is far from the point of wanting to celebrate anything. Anna’s mother’s attitude to life and her love-hate relationship with even her closest family is summed up with the fury she confronts her own mother (Eileen Davies) with as she tries to help by loading the dishwasher: “Only a sociopath would put mugs on the bottom shelf!”.

Early on we are gifted with a beautiful, simple and heartbreaking montage. The way film is used thematically and literally as part of the plot to save or relive a memory, as a way to preserve the past and people who are no longer with us, but also as a crutch and an excuse for not moving on, has real punch. Anna’s “thumb films” seem a quirky diversion at first, a way for Anna to continue coasting and avoid committing to anything in life. But as the story progresses it becomes clear that, to Anna, they serve a far more essential purpose and she is not going to give them up without a fight.

It’s great to see my part of the world looking so equally grim and picturesque. We do that kind of landscape well in West Yorkshire. The film’s stylings in general could be described, like Anna, as looking like it hasn’t made too much of an effort, yet it certainly has a special something. It all has a certain dressed-down appeal and the universal themes speak for themselves. If this is an indication of the direction of future works from writer-director Rachel Tunnard, count me as an early fan.

Adult Life Skills has a whole lot going for it. The comedy is well-judged, the look of it unfussy and the emotions raw to the point of discomfort. Everyone has their own coping mechanisms when they lose someone and it can be difficult to keep track of how quickly life passes you by as you grieve. Who’s to say giving your thumbs voices doesn’t work for some people? Sooner or later, though, acceptance comes and painful memories can become joyful and sustaining ones. SSP