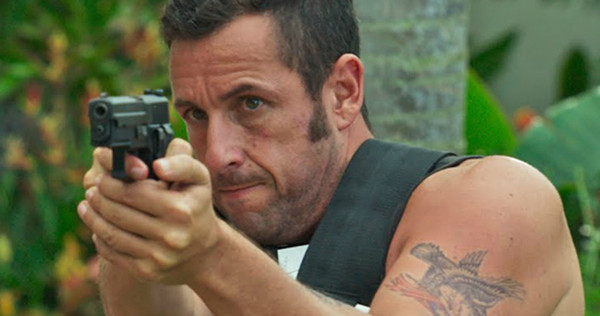 I was planning to bite the bullet and get through this one quick (I had already paid for my Netflix subscription after all) but my internet provider had other ideas, perhaps in protest, when it went down over the whole bank holiday weekend. Adam Sandler’s comedy has previously alternated between the downright offensive and the juvenile, but now he’s hit middle age (on the outside at least) he’s just sad. A slight air of melancholy, summed up by Sandler glumly reminiscing about being “stuck in shop class building bird cages and foot stools” is probably the only good thing about THE DO-OVER.

After bumping into old school friend Max (Adam Sandler) at a high school reunion, down-in-the-dumps bank manager Charlie (David Spade) takes a break with his buddy. When Max fakes their deaths and steals a pile of cash belonging to the man whose identity he has stolen, he and Charlie find themselves on the run from some bad men.

Adam Sandler’s boat (I’m going to keep calling him Adam Sandler rather than Max because he’s never not playing Adam Sandler) is called Fish ‘n’ Chicks. That’s not only unfunny, it doesn’t even really work as a pun. It’s still probably the best gag in the film, the script of which, by Kevin Barnett and Chris Papas, seems to have set out to destroy mirth.

There might as well be a massive Corona logo stuck to the corner of the screen throughout the Do-Over – the advertising deal they got for this movie must have been lucrative, with at least a bottle or better a blatant “I love this brand of beer” shoutout in every scene. Incredibly it makes the FAST & FURIOUS franchise look positively subtle in comparison, and Dom Toretto really likes his Mexican beverages.

You think the story might go in an interesting direction when Charlie’s expository voiceover is broken off mid-sentence by an explosion. It doesn’t, with laboured scene after laboured scene utterly devoid of humour following the plot (such as it is) kicking into gear.

Goons bouncing off the bumpers of speeding vehicles are about as sophisticated as the jokes get, but Adam Sandler and Charlie also use the same tactic to gain an ally – stalking and running over Heather (Paula Patton) with their car – and that’s apparently meant to be cute rather than cartoonily misogynistic. This only gets more sickening as we get to see our supposed protagonists getting a kick out of woman-on-woman brutality in the final set piece.

Being misogynistic would be enough to write this off as not worth your time, but The Do-Over is also homophobic (“aren’t men who like men equally funny and scary, right guys?” the film seems to say in a quite literally tortuous final act scene); it’s derogatory to the handicapped (Sandler’s senile mother plastered with makeup like a pantomime dame and her debilitating condition constantly mocked by her son is the basis for an entire sequence) and very one-note Adam Sandler-y (two utterly repellant guys who somehow aren’t shot at more often).

It took me several attempts, but I did get through the Do-Over. I think I only finished it because I didn’t want such a pathetic movie to defeat me. There’s nothing to it accept backwards man-childishness, and it’s even worse when Sandler tries to be serious, when he tries to make us care and appreciate a Hallmark card ending after showing utter disdain for us for 75 % of the movie. This didn’t defeat me, and if you start it you might as well finish it just to reaffirm that you are better than Sandler. But if you haven’t yet hit play, I’d strongly advise that you don’t bother. Only pain will you find. SSP