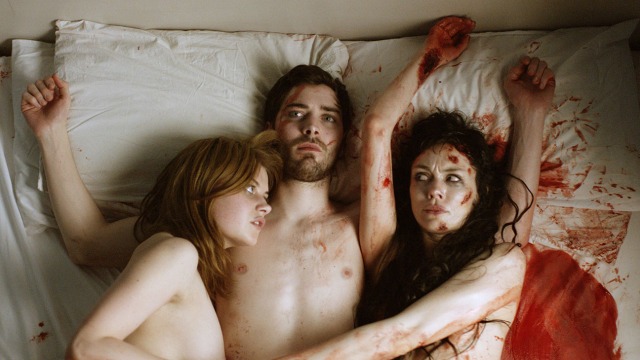 Raise your hand if you remember how rubbish LIFE AFTER BETH was? NINA FOREVER excels in pretty much every way its totally wonky American cousin fails – it’s sincere, soulful and has something important to say about losing a loved one before their time.

When trainee paramedic and reluctant supermarket worker Holly (Abigail Hardingham) strikes up a fast romance with Rob (Cian Barry) it seems like her life is finally coming together. Rob finally begins to raise himself out of a black pit of depression too, but despite the new couple’s passion and their connection, there is a problem. That problem is Nina (Fiona O’Shaughnessy)  – Rob’s ex who has died horribly but won’t let that stop her from coming between them.

The film’s opening scene is a beautiful illustration of stillness and all its implications – a static camera, a motorcycle crash beside a placid lake, a failing flickering indicator light in time to a failing, flickering heartbeat. Then death becomes life once more as the pulse steadies and the prone body stirs and the circle of life keeps on spinning.

Holly is described as “vanilla” by a condescending colleague at one point, in stark contrast to the raw intensity of actress Abigail Hardingham’s heartfelt performance. Not everyone could manage to eat a pomegranate seductively, but Hardingham somehow manages it (just look at Rob’s face – he’s impressed too!). Cian Barry has the thousand-yard-stare of a man at war with himself and the sturdiest of three-handers is completed with Fiona O’Shaughnessy who gamely spends most of the film stark naked and caked in claret and impresses with her unsettling ruined body movements and by balancing playing Nina as heartbroken from beyond the grave and tossing out catty insults.

Nina Forever always walks a very difficult line, between life and death, love and regret, fun and danger. The first lovemaking scene between Rob and Holly starts off sexy and ends up pretty terrifying as the lovers hurriedly disentangle to get away from the bloody spectre of Nina rising out of their bed like a more talkative J-Horror ghoul. The scene really is one-of-a-kind, segwaying straight from abject horror to awkwardly introducing the ex (who just happens to be dead). The second lovemaking scene where Holly and Rob seem to embrace Nina’s supernatural intrusion almost as a fetish element in their relationship is even weirder and more striking. It really has got to be seen to believed.

As well as his new girlfriend, Rob has some perfectly lovely in-laws (David Troughton and Elizabeth Elvin) who invite him over every week for Sunday lunch and insist he needs to move on from, but never forget, their daughter Nina. The film’s take on loss and mourning is not a clear-cut one as a truly heartbreaking scene between Rob and Nina’s parents in a crowded restaurant makes clear. As the ghostly Nina points out to Rob “We never broke up”. Erm, she’s not wrong. Grief never really leaves you and will always be part of you, but you can’t let it rule you. There is always more out there for someone who has gone through the trauma of loss and once you find someone to share your grief with you can better overcome, or at the very least live with less pain. Later in the film when Rob and Holly commit to their relationship they also commit to Nina’s bloody apparition being part of their life and stock up on clean sheets accordingly, a pragmatic and progressive way to look at loss.

Anyone dismissing this film with a sneer as “emo” isn’t worth engaging in civilised conversation. It may be destined for cult status due to its genre-melding and plentiful gallows humour, but Nina Forever doesn’t seem to be gunning for this. Co-writer-directors Ben Blaine and Chris Blaine simply want to have an honest and insightful conversation about grief and people’s inability to cope with this most tragic and cruel fact of human existence. A scene towards the end seems ever so slightly too gruesome for the sake of it, but this doesn’t lessen the impact of the piece as a whole, and Nina Forever ends up being an emotionally fulfilling thesis on grief and one of the most unique British horrors for years. SSP