Posted on December 21, 2016 by Sam Sewell-Peterson 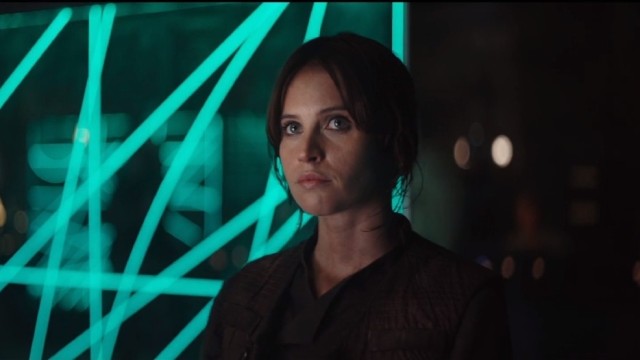 I rebel, therefore I am: Lucasfilm/Allison Shearmur Productions

Was the emotionally bereft GODZILLA remake just a blip for Gareth Edwards? Thankfully yes it was. There is more genuine humanity, imagination and enjoyment to ROGUE ONE: A STAR WARS STORY than there was not only in the ill-advised giant lizard retread, but also in the vast majority of the blockbusters released in 2016. It’s a bit of a treat for STAR WARS fans too, both fleshing out a gap in the timeline and providing new sights to behold.

Born rebel Jyn Erso (Felicity Jones) is recruited by the Alliance in their fight against the tyrannical Galactic Empire. Her long lost weapons designer father (Mads Mikkelsen) may hold the key to the destruction of the Empire’s superweapon, The Death Star, and Jyn must lead a team of spies, assassins and outcasts to retrieve this information before time runs out for the Rebels and for the galaxy.

Finally someone plays with the style of Star Wars. We’re straight into the story sans opening crawl, scene transitions are liberated from the archaic wipe edit (finally Star Wars is edited according to the action rather than the action working around the edit) and character-fleshing flashbacks are incorporated. This was the perfect time to do this: we’re in mostly uncharted waters here, and if Lucasfilm will continue to hire distinct directors to helm these spin-offs, they should be free to make them their own and make every film it’s own thing. Edwards brings with him a more hard-edged documentarian aesthetic, following our heroes a pace behind through crowded and sweaty alien markets and throwing us in the thick of frenetic, brutal battle scenes. I said the opening of THE FORCE AWAKENS was like Star Wars meets SAVING PRIVATE RYAN, Rogue One is more Star Wars meets PLATOON. Edwards gets just the right balance with paying heed to what has come before as well, with chunky, grimy technology and pleasingly terrible 1970s hairstyles.

Felicity Jones as Jyn is a grounded and empathetic lead who kicks some serous ass without any force gimmicks. Alan Tudyk playing towering reprogrammed Imperial droid K-2SO as a mix between deadpan comedian and passive-aggressive child was a master stroke (thoughts out loud on Jyn: “I find her answers vague and unconvincing”, “Do you want to know the odds of her betraying us? They’re high…Very high!”). Ben Mendelsohn’s cold and brutal autocrat Krennic is often undone by his frustration at not receiving credit for his hard work, and sees straight through a deception early on (“Oh look, you wife: back from the dead!”). I wouldn’t say the whole cast are given much to do, with rebel leader Cassian’s (Diego Luna) edginess dropped by the wayside quickly and Forest Whitaker and Mads Mikkelsen acting as glorified (admittedly well performed) plot devices. What I can’t deny is that a certain dark lord’s brief appearance will give you chills and thrills.

Here’s the thing: massive space battles rendered with next-gen special effects are stunning, but bringing a long-gone actor from A NEW HOPE back from beyond the grave with the same? I’m not so sure. It’s undoubtedly a very sophisticated effect, but it’s almost too good, too detailed, and something certainly triggers the uncanny valley sense. I found myself not really listening to the dialogue in these important to the plot scenes, which was an issue. Elsewhere archive footage and outtakes from the original film are used, which work perfectly fine for brief shots.

The plot moves well, even if it doesn’t deviate much from the Star Wars formula. It meets and sometimes exceeds your expectations of action and spectacle, but being a Star Wars film the finale is of course a race against time to destroy something in space. Joining the Rebel Alliance also seems to be a large part about who you know as well as you heart and resolve, as the Rebellion top brass don’t seem much interested in Jyn aside from how they can exploit her familial connections. It’s a galaxy of coincidence, but we’ve always known that. Rogue One hits the right notes, throws in some surprises and gives us time enough to spend with a compelling new group of characters. As another spin-off/prequel in an industry seemingly producing little but, it’s certainly out in front of the pack. SSP