Posted on November 18, 2014 by Sam Sewell-Peterson 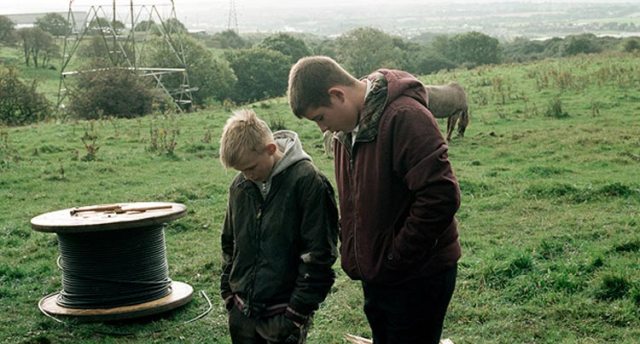 THE SELFISH GIANT feels like a wonderful amalgamation of OLIVER TWIST and STAND BY ME transposed to the rougher end of Bradford, West Yorkshire. It’s a social realist fable that deals with real-world hardship in a punchy manner, but always retains a genuine human warmth and a distinctive, still beauty in its visuals.

Our heroes are two working-class pre-teen friends, the diminutive, volatile Arbor (Connor Chapman) and the towering, soft soul Swifty (Shaun Thomas). The kids spend their days skipping school and collecting scrap in the hope of a quick cash fix. They work out of necessity for a manipulative and shady dealer, Kitten (Sean Gilder) and over time their friendship is tested, as is their (relative) innocence as children as Arbor takes steadily bigger risks in how he obtains his precious metal, be it discarded or stolen, and Swifty becomes involved in Kitten’s high-stakes bets on illegal horse-and-cart races.

On the Stand By Me end of things, you have close friends whose lives are transformed and childhood prematurely ended by traumatic events, all contained within bleak, yet oddly pretty vistas. On the Oliver Twist end of the scale you have a small-time crook with a big personality complex making a living through a young workforce under his spell, and a very Dickensian feeling sympathetic portrait of the working-class poor and impoverished.

The film should have appeal across the board, being an extremely well-told and intimate character piece that discusses universal themes of class and wealth, friendship and morality, but it will strike a particular chord with Bradfordians, who should recognise the locations, the kinds of people and their general outlook on life. Even if you don’t have an Arbor or Swifty in your life, you’ll have doubtless met or seen numerous kids like them, and for the sake of your soul you’d have empathised with them even if you didn’t quite understand their worldview. Those of certain political persuasions might disagree, but for the more liberal-minded, you can’t just ask that children like Arbor and Swifty, their parents and their extended family just buck up their ideas and try harder to improve their lives. For many it’s not that simple, and most of us have no idea how tough their lives are, the difficulties they face, and they need the very foundations of society to change before they can.

Both of the young leads have great chemistry, are incredibly natural, and should go far if they choose to continue acting. The fully-grown actors are no less impressive – Sean Gilder is appropriately sinister without ever becoming a pantomime villain, and Steve Evets and Siobhan Finneran’s performances are fully-rounded and full of pathos as Swifty’s parents.

Clio Barnard, The Selfish Giant’s incredibly talented writer-director who was also behind THE ARBOR, the odd sort-of documentary telling Bradford playwright Andrea Dunbar’s story, is absolutely a force to be reckoned with. She’s perceptive and non-judgmental, and has a real eye for bringing relevant social problems to light without being patronising or militant. She has a touch of Ken Loach here, a dash of Shane Meadows there, and will surely be one of the key figures in British independent filmmaking for the foreseeable future. Like Meadows, she makes films that are clearly products of their environment, firmly grounded in a distinctive and recognisable time and place and concerning distinctive British subcultures. For Meadows it’s usually the Midlands of the not-too-distant past, for Barnard it’s West Yorkshire of the here and now. I’m pretty convinced that only someone born in Bradford and who knew, and was one of, the people, could successfully bring this story to the screen.

Some might view The Selfish Giant as a little downbeat, but I don’t see it that way. Arbor and Swifty’s life is hard, sure, and they face real trauma and heartbreak far younger than they have to, but in the end it’s a film full of positive messages – the importance of a strong friendship, a bad life can always get better, and there are positives to be found in all situations. Despite the pain, the film remains a beautiful and moving experience, the early morning light over the city and the mist-shrouded power pylons that dominate open fields match this moralistic, old-timey story that just happens to take place today. It’s an 80s-style kitchen sink drama, but it’s one that isn’t dominated by emotional gut-punches or presenting gritty realism. It’s the real world, the real experience of some real people, but presented in a dreamlike, almost folklorish package that heightens the reality Clio Barnard is presenting us. SSP