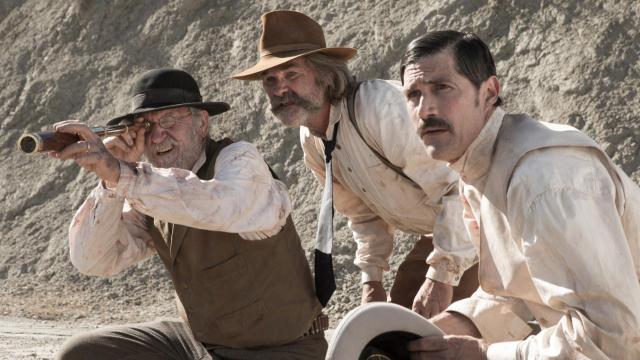 Another day, another Western. America’s favourite film genre just keeps on going, but as long as they’re as vivid and interesting as BONE TOMAHAWK you don’t tend to mind.

When a young woman is kidnapped by cannibalistic raiders, a ragtag rescue party goes hunting. Sherriff Hunt (Kurt Russell), his deputy Chicory (Richard Jenkins), the victim’s determined husband Arthur (Patrick Wilson) and cocky gentleman gunfighter Brooder (Matthew Fox) have one hell of a journey ahead, and time is running out to bring Samantha (Lili Simmons) back in one piece…

Bone Tomahawk is really, and completely unexpectedly, funny. The film opens with a pair of drifters brutally offing a guy in his sleep with only a blunt knife and a big rock in order to rob him (a sight so unforgiving and extreme I emitted a strange cry-laugh). The first time we meet Jenkins’ doddery deputy Chicory recovering from a heavy night he ruminates on corn chowder actually tasting like corn: “Things are startin’ to line up” and the strongest whiskey sold in the local saloon makes you feel “Like a tree fell on ya!”. The film doesn’t overlook the bleakness of life in the West, but it acknowledges the humour in even the darkest of situations. That is human nature, after all.

The film is very careful to emphasise that the cannibal antagonists aren’t from any of the major Native tribes, but in fact horrify their fellows. Despite this deliberate act of preemptive apology it is a good thing that we are now allowed to depict monstrous Native Americans as well as monstrous settlers on film, as surely both must have existed. Thankfully we’ve long left behind racist representations of the Native “other” in Westerns, but there is certainly space to show rotten apples in any society.

This is a slow-burn character Western that transmutes into an outright splatter horror film by the end. We are given three quarters of the story to get to know the lead trio, often bickering, before they reach their goal. Do you remember how badly THE LONE RANGER botched the tonal dissidence between horror and Western tropes? Bone Tomahawk succeeds at every turn that Disney’s flawed effort failed, and tone change from black comedy to horror reminded me a lot more of another Western from the last decade, THE PROPOSITION.

Kurt Russell has had a great year for bewiskered Western antiheroes, but he’s certainly more sympathetic, and far more competent as Sherriff Hunt than he was as The Hangman in THE HATEFUL EIGHT. Patrick Wilson, Matthew Fox and Richard Jenkins are a winning combination of contradictory characters. Once the the group do arrive at their destination it all becomes more harrowing than any decent person could imagine.

I will say that the film, for all its commitments to realism and its own individual style and tone, does give in to Hollywood Western formula as it goes on. Characters refuse to die until their job is done, people don’t miss when it matters, the female lead is a damsel and little more, there is  big and heroic sacrifice to cap off the story.

The 2010s (or whatever you’re supposed to call this decade) have been a great few years for the Western. THE SALVATION, SLOW WEST, A MILLION WAYS TO DIE IN THE WEST. I might be joking about one of those (except for the moustache song). As long as you throw a few curved balls in there, take a sideways glance at the familiar you can keep providing audiences with the same thrills the best in this genre delivers. SSP

I'm not paid to write about film - I do it because I love it. Favourite filmmakers include Bong Joon-ho, Danny Boyle, the Coen Brothers, Nicolas Winding Refn, Clio Barnard, Steven Spielberg, Guillermo del Toro, Paul Verhoeven, Taika Waititi and Edgar Wright. All reviews and articles are original works written and owned by me. They represent one man's opinion, and I'm more than happy to engage in civilised debate if you disagree.
View all posts by Sam Sewell-Peterson →
This entry was posted in Film, Film Review and tagged A Million Ways to Die in the West, Black Comedy, Bone Tomahawk, Film, Kurt Russell, Lili Simmons, Matthew Fox, Movies, Patrick Wilson, Richard Jenkins, Slow West, The Hateful Eight, The Lone Ranger, Western. Bookmark the permalink.