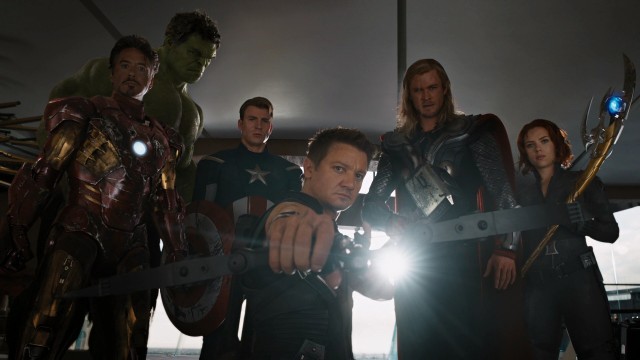 In 2012 it finally arrived – the blockbuster to end all blockbusters (as if). There was so much riding on THE AVENGERS, so many moving parts and so many things that could have gone wrong. Thankfully they didn’t, and it turned out to be rather good. Did it change mega-budget filmmaking? In a way. Does it still hold up? Let’s examine that further.

When an alien army invades Earth, the world’s mightiest heroes must put aside  their differences, unite and defeat an unprecedented threat they would never be able to overcome in their own.

Over four years between 2008-12, Marvel delivered a series of mostly underwhelming origin films that seemed to spend as much time setting up The Avengers as they did introducing the hero on their own poster. This is arguably the most irritating trend that has hung around since The Avengers; studios yearning for a piece of Marvel’s pie and rather than steadily world-building over time and multiple movies, brute-forcing franchises into messy shared universes or spending more time setting up what is to come than telling the story at hand. Sony tried it and fell flat on their face. Warner Bros have clumsily rushed it through and eclipsed the hero who was meant to be at the centre of it all. Even GHOSTBUSTERS and TRANSFORMERS universes have been mooted for no justifiable reason.

Incredibly, Joss Whedon managed to marshall all the Marvel big-hitters, played by some seriously big personalities (Robert Downey Jr, Samuel L Jackson and Chris Hemsworth’s biceps alone are competition enough for screentime) and somehow make the result work as one coherent film. The highlight of the impressive ensemble is unquestionably Mark Ruffalo, playing the latest incarnation of Bruce Banner/The Hulk (though he’s the first actor to truly play both sides of the character with the assistance of motion-capture). Whedon appears to truly understand and love the character, and Ruffalo is able to effectively communicate to the viewer through a sensitive and understated performance the extreme fear, paranoia and depression of Banner, and by really letting rip in his mo-cap suit he demonstrates the volatility and terrifying power of “the other guy”. Robert Downey, Jr.’s wisecracking playboy Tony Stark/Iron Man gets all of Whedon’s best lines – my personal favourite being when Stark is trying to reign in the furious new arrival Thor and mocks his flowing red cloak with “doth your mother know you weareth her drapes?”. Scarlett Johansson also holds her own in a largely testosterone-fuelled cast, and manages to develop Natasha Romanoff/Black Widow from the stereotypical sexy femme fatale we saw in IRON MAN 2 to a fully-rounded, deadly and viciously intelligent character tormented by her violent past that we see here.

The final act showed the pinacle of superhero action of the time; with the six heroes working together to defend Manhattan from an alien invasion lead by the increasingly manic Asgardian exile Loki (Tom Hiddleston). In one particularly slick and visually eye-popping moment the camera snakes its way through the city and in one unbroken shot takes in each of the Avengers in turn working as a team to repel the invaders. I will say that the film is largely responsible for Marvel’s tendency to end their films with a battle in either a city, the sky, or both, and also influenced other studios to end their films with 45 minutes + of action monotony, but this was hugely enjoyable the first time round.

The most rewarding and enjoyable moments for me were the more intimate encounters, particularly a fine early scene which has Black Widow traveling to Calcutta to retrieve and recruit a reclusive Banner, and the on-edge scientist feigns a transformation into his greener side to test Romanoff’s true intentions. I also loved Black Widow’s interrogation of Loki before the mid-film set piece – the scene gives Johansson and Hiddleston plenty of room to play off each other and it’s intelligently scripted, brilliantly tense and beautifully performed by the actors, resulting in an incredibly revealing moment for both of their characters.

The Avengers is exactly what a great blockbuster should be – grounded enough to be relevant and dramatically effective in the contemporary world (with references to worldwide energy shortages, WMDs and the terrifying future of warfare) but also fantastical enough to be fun, and to provide a level of escapism for the audience. I must admit, the film does lose momentum here and there, and there are some incredibly convenient plot devices employed to get the heroes together, but you can’t really hold these minor gripes against a filmmaker like Whedon. This is a man who achieved the impossible in making Marvel’s crowning glory worthy of the time and effort dedicated to laying its groundwork over the last half-decade, and with the addition of his trademark playful sense of humour, the film doesn’t look like it’s taking itself too seriously, which could have been fatal. Awesome is a criminally misapplied adjective in this day and age, but there really is no better way to describe this super-powered extravaganza. SSP