Posted on December 14, 2013 by Sam Sewell-Peterson 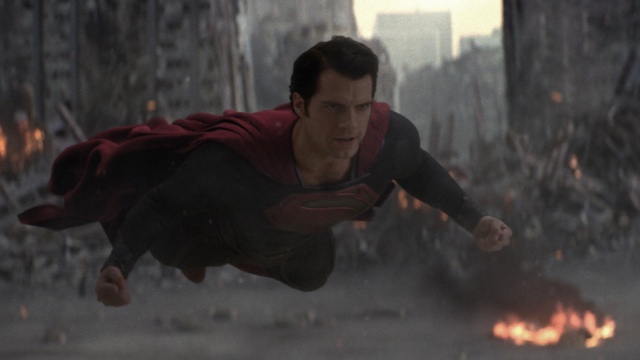 MAN OF STEEL is a much better sci-fi movie than it is a Superman movie. If Zack Snyder, Christopher Nolan and David S. Goyer had been as interested in what Superman represents as a character on Earth as they evidently were with his alien origins, then we might have ended up with a very different, and much more balanced film.

In another downbeat rebooted superhero origin tale, we follow alien refugee Kal-El (Henry Cavill) who has been reduced to drifting from backwater to backwater in an effort to disguise his extraordinary powers from the world. He discovers his destiny as a savour of the city of Metropolis when the discovery of a strange object buried in the ice of the Arctic is investigated by inquisitive journalist Lois Lane (Amy Adams) and the vengeful renegade General Zod (Michael Shannon) arrives on Earth with his tyrannical alien cohort.

I’ve got no real objection to the first act of the film, in fact it’s pretty impressive. We start on Kal-El’s dying home planet of Krypton, where we get tantalising glimpses of the workings of a dystopian alien society, the mistakes they’ve made and the disastrous consequences of these errors coming back to haunt them. We’re then transported to Earth, and see the young Clark growing and coming to terms with his remarkable powers in a series of affecting flashbacks.

After the first 45 minutes or so things start going a little downhill. It never gets bad, but I have more than a few issues with it.

Henry Cavill makes a good Superman – he’s charismatic, charming and looks the part, though some of the decisions made by the writers about his character and his actions on-screen don’t quite fit. Fine, he’s a young, rough around the edges and inexperienced Big Blue Boy Scout, but his actions on the whole are too reckless, and he somehow manages to save less people once he’s suited up than when he was working from the shadows.

Russell Crowe, Kevin Costner and Diane Lane all bring something different to the table as Clark/Kal’s parents (extra-terrestrial and earthbound), and between them they act the rest of the cast off the screen. Costner’s scenes with a younger Clark (Dylan Sprayberry) pack real emotional wallop, and they generally avoid being overly sentimental. A standout scene early on involves Lane as Martha Kent rescuing Clark from school, after he discovers his super-hearing and x-ray vision and hides, utterly terrified in a closet. I’m amazed really that no-one has thought to explore that on film before – if you were a child and suddenly discovered these abilities in the middle of a class at school, you’d be horrified. Crowe’s performance is a solid foundation that the film’s prologue on Krypton is built around, and an inventive writing decision allows for Jor-El to still be involved in the story later on, resulting in the film’s most creative and entertaining action scene.

Elsewhere the casting is a little disappointing. Though she gets plenty of screentime, I still don’t have a handle on Amy Adams’ interpretation of Lois Lane. She just doesn’t get to do much “Loisy” stuff, seems more stroppy than she is bold and independent, and mostly ends up passively observing events or stumbling across something to move the story on. Michael Shannon also disappoints as General Zod. He’s doing something completely different with the character than Terence Stamp did in the Richard Donner films (being a born soldier and a brute), but doesn’t manage to strike the perfect balance his predecessor did, either under or over-acting from scene to scene. Another problem with this version of Zod is that he’s completely outshone by Antje Traue’s secondary antagonist, the cruel and zealous warrior woman Faora.

The production design throughout is striking, particularly in the Krypton-set opening, and Hans Zimmer has produced an evocative and memorable score that doesn’t top the iconic John Williams theme (how could it?), but still leaves a lasting impression, and sits comfortably among Zimmer’s finest work.

Though ably directed by Zack Snyder, the action is generally repetitive and dull. The best action scene in the film doesn’t involve superheroes and villains in apocalyptic conflict (though there’s plenty of that) but has Lois Lane running around a Kryptonian spaceship and Jor-El’s hologram opening and closing doors…and that’s not a good sign for a massively-budgeted comic book blockbuster.

Perhaps the biggest problem Man of Steel has is one of tone. It’s been commented on by many that Warner Brothers are trying to turn Superman into Batman to make him “cool”, and with Christopher Nolan and David S. Goyer on board, there is certainly an element of that. You can of course make a moodier, more contemplative version of Superman work with the big biblical themes and moral/ideological questions (somewhat clumsily explored here), but a film built around this character still must, must leave the viewer with a sense of hope. Man of Steel is not hopeful, it’s not inspiring, it’s depressing. Maybe the hugely controversial and infamous character decision at the film’s climax will pay off well further down the line in sequels, but at the moment it just undermines what Superman as a character is about. What the film is missing is glimmer of light, a bit of humour. There’s two good jokes in the entire film – even Nolan’s super-serious THE DARK KNIGHT had more laughs than that!

Man of Steel is a good sci-fi film that explores some challenging concepts in its first 20 minutes. It’s well crafted overall, and the scenes exploring Clark’s formative years have a lot of heart, but beyond that it’s severely lacking as a memorable superhero origin story. Maybe once this new series is well-and-truly up and running, and the familiar story elements (The Daily Planet, Lois & Clark, Superman’s unshakable ideology) are established, then everything will fall into place. But I’m not holding out too much hope as the more Warner Brothers announces about the follow-up (still tentatively titled BATMAN VS. SUPERMAN), the more it looks like the Last Son of Krypton, and everything he symbolises, is being pushed into the background of his own series. SSP