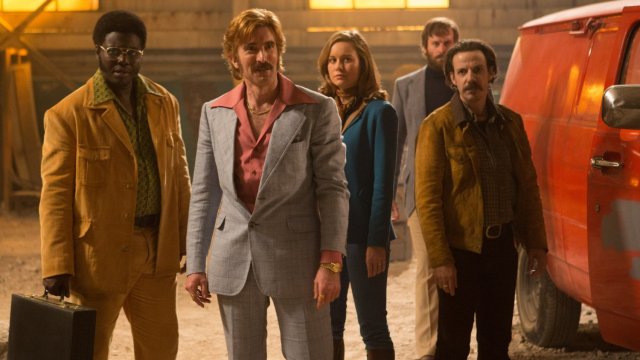 Is this an arms deal or a fashion show?: Film4/Protagonist Pictures

Does Ben Wheatley ever sleep? Over the past eight years the British polymath has produced kitchen sink drama, folk horror, black comedy, Avant-garde, period-sci-fi-satire and DOCTOR WHO. He never does the same project twice and tends to mix it up in terms of his style and collaborators (writing partner Amy Jump and good luck charm Michael Smiley aside). Judging by FREE FIRE, Wheatley isn’t done with trying out ideas yet, though it’s unfortunately his least interesting film so far.

Various shady types arrange an arms deal in a deserted warehouse in Boston. Things do not go according to plan and before they know it everyone is fighting for their lives as well as their money.

Considering the painstaking purpose-building of a vast Boston warehouse on the outskirts of Brighton, the geography of the action gets jumbled pretty quickly. It’s a good job the characters are dressed in every shade of the 70s or might be even more difficult to work out who is who through the dust. Wheatley captures the hectic panic of a shootout, but I’m not convinced he’s a born action director. The editing is a bit bewildering and the shootout, aside from the timely unleashing of flying gas canisters, pretty bog-standard. That’s fine, by the way – he’s plenty skilled at other styles.

I liked that nobody in this world is a good shot and pretty soon it’s a case of everyone dragging themselves around being winged by ricocheting bullets. Sharlto Copley does his quirky nutjob thing as a disco arms dealer, but it is Sam Riley as a volatile junkie and Armie Hammer as an anachronistic hipster who steal the show. You really have to feel sorry for Michael Smiley, who is so loyal to Wheatley but who spends most of the film splayed on his back and slowly lurching around the battlefield as his character becomes more maimed. You’ve got to hope the cast gelled and had fun making this, because they sure spent a lot of time lying in the dirt.

The film falters not because it’s mostly action, and not because it doesn’t have much in the way of plot. MAD MAX: FURY ROAD was mostly highly destructive car chase, but it maintained momentum with vivid characters whose arcs were explored through actions rather than words. RESERVOIR DOGS, which Free Fire has been compared to repeatedly, jettisoned the plot after the opening sequence with no negative effect on the arcs or the memorability of Mr Pink and co, so I’d have to suggest that it’s the characters in Free Fire that ultimately let it down. To be honest I’m having a tough time remembering any of their names (accept for Ord, because who’d forget that?).

The most interesting elements in the film are the moments of relative quiet, the banter and quips that start off cocky and become more desperate and clumsy as the chaos progresses and the wounded become more so. Little moments, reactions to bizarre turns in the battle (Brie Larson’s eye-roll at Copley’s macho posturing behind his back and another character’s comment, again to Copley in the latter, more desperate stages of the battle, “Hey, I like your cardboard armour!”) and snippets of half-heard, overlapping bickering make the film. The “resolution” of the shootout has a character slumped against a colourful wall advert and fruitlessly attempting to unfurl the skeleton of an umbrella as the warehouse’s emergency sprinkler system kicks in – a beautiful summing up of the escalating and ultimately stupid and pointless events we’ve witnessed. This moment will stay with me, as will some of the one-liners, but this mad gun-toting group likely won’t. SSP