Posted on February 18, 2018 by Sam Sewell-Peterson 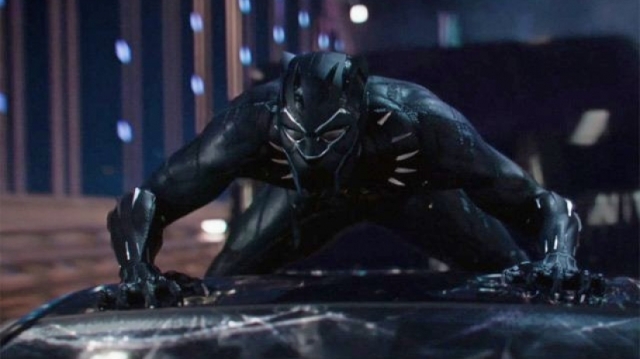 As thrilled and enthralled as I was by BLACK PANTHER, I can’t imagine what it must be like to watch this if you’re black.

Newly-crowned Kind T’Challa (Chadwick Boseman) returns home to secretive high-tech African nation of Wakanda to rule. He must unite the tribes and maintain order using the royal birthright alter-ego of the Black Pather, not to mention deciding on how his isolationist country should interact with the world. Everthing becomes much more complicated when vengeful radical Erik Killmonger (Michael B Jordan) returns to Wakanda and challenges T’Challa for the crown…

Refreshingly, T’Challa doesn’t subscribe to the old “lone hero thing”. He knows he needs, and he asks for, help. Always having a team to back him up has a lot to do with him being royalty (even back when kings led the charge into battle they were surrounded by loyal bodyguards) but it also speaks volumes of his personality, and how he sees his family and friends. To T’Challa, those he values are indispensable assets.

And what assets these loved ones are! Letitia Wright’s impish gadget gal Shuri (T’Challa’s sister, who must surely be destined for a scene where she emasculates Tony Stark through tech talk) and Danai Guira’s deadly spear-wielder Okoye (imagine how formidable you have to be to be asked to protect a bulletproof warrior-king). Both are undeniable highlights of the film, and Marvel better be busy writing them into anything and everything they can. Chadwick Boseman is strong in the lead even if his accent occasionally veers into uncharted territory and yes, everyone who has proclaimed Michael B Jordan’s Killmonger as the most interesting and compelling villain in a Marvel film are correct. His arc, his aims and motivations carry the entire film and fearlessly skewers and subverts realities of race in our contemporary world.

This is less a superhero movie than a fantastical spy thriller. As for the spy/espionage stuff, the gadgets are better than Bond, the politics more self-aware and the tech displays more original and exciting than in most sci-fis. We see traditional tribal cloaks become energy shields, holograms that disintegrate into sand clouds and a range of remotely-piloted vehicles (Shuri has a moment of panic when taking sudden control of a car in South Korea and wondering, “Which side of the road do they drive on?”).

Black Panther’s action scenes are something else, a whole new scale and level of vital energy for Marvel. I didn’t stop grinning for the entire Busan sequence from the (AVENGERS-topping) long-take casino fight to the deliriously fun gadget-driven car chase that follows it. Later on we have a pitched battle on the plains that wouldn’t look out of place in LORD OF THE RINGS or GAME OF THRONES.

I was not familiar with the concept of Afro-futurism at all, but it’s a fascinating aesthetic, presupposing an untouched African nation as a vibrant cultural collage focussed through a science fiction lens. Director Ryan Coogler revels in the look and feel of this world, with soaring camerawork capturing both vast tableaus (the awe-inspiring first flight into Wakanda) and every little detail of characters’ traditional African dress (taking in the distinctness of each region’s tribe as they gather to observe a bout of ritual combat). Colourful tribal dance performances are played completely straight and without much comment, and as such it just sweeps you up (from an outsider’s perspective) as a striking, vibrant celebration of a wealth of African cultures.

Black Panther represents Marvel’s boldest move yet in many ways. It’s one of the darkest and most violent of the studio’s offerings so far, but it’s also one of the most fun and full of life. While the spectacle on offer will surely mean it’ll end up as one of the blockbuster highlights of 2018, it’s an important marker in wider film history as well. The modern superhero movie cycle may not have happened at all without BLADE in 1998, now another black hero is taking the genre into its next phase with wit, bravery and a whole lot of power behind its punches. It’s fantastical but grounded, escapist but about the here and now. Here’s hoping our return to Wakanda isn’t in the too distant future and that Coogler gets to make whatever the hell he wants next. SSP