Review: The Fundamentals of Caring (2016) 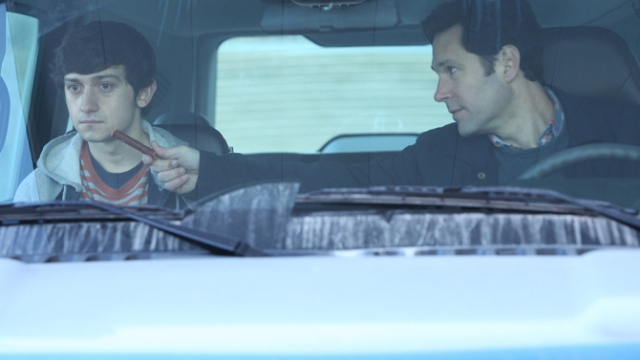 The Fundamentals of Caring (2016): Worldwide Pants/Netflix

I really want movies like this to do well. It’s great that Netflix is democratising filmmaking, allowing for talent and Adam Sandler to find an audience and  bypass the Hollywood system. Of course not all of it can be gold, and unfortunately THE FUNDAMENTALS OF CARING, for all its good intentions, misses the mark by quite a margin.

After completing a care-giving course, the grieving Ben Benjamin (Paul Rudd) starts to look after Trevor (Craig Roberts) a challenging young man with muscular dystrophy. Despite Trevor’s initial resentment and to help him deal with his own issues, Ben decides to get his charge out to see the world, ao they embark on a sightseeing road trip, picking up others along the way.

The film establishes what makes a good carer straight away; caring but not caring too much, gaining that same level of kind detachment that those in the medical profession must maintain to function in their jobs. It’s a fine balance to strike, and a very real everyday challenge to anyone with a duty of care for a non-family member.

From the start, Fundamentals is trying awfully hard to be a distinctive indie. Early on Ben is filmed from directly above on a bench as a crowd-swarm swirls around him. A cool alternative soundtrack also fits like a glove with this material, and often accompanying what are probably important character moments that we aren’t allowed to hear.

The film does pose an interesting question: what if a person in need of care is an absolute jerk? What caps it all is that as well as Trevor being a manipulative, rude, prankster jerk, Ben is also a self-hating and self-pitying one so it’s one jerk looking after another jerk. I don’t think their life-or-death joshing is all that funny, especially when you’re preparing for it to go all Boy Who Cried Wolf at some point.

I’ve said it before and I’ll say it again: characters don’t have to be likeable, they just have to be interesting. That’s where The Fundamentals of Caring ultimately fails. The premise is fine and so are the performances from Roberts and Rudd, but it falls completely flat with the characters on the page. Trevor is disabled and bitter about it and that’s his primary attribute, his whole character. Ditto for Ben who is defined almost solely by his guilt. This also goes for Selena Gomez’s Dot and Megan Furguson’s Peaches, who are the character with daddy issues and the pregnant one respectively. There is no next layer to any of them – that’s your lot.

Now obviously it’s a good thing that Trevor experiences something outside his familiar shut-in lifestyle and he seems to strike up a quick friendship with Ben, but his mum (Jennifer Ehle) agrees to the idea of their spontaneous adventure awfully quickly. That’s the price of fluid film storytelling I guess.

Now I know it’s been a long-running debate about the portrayal of disabled characters – should able-bodied actors be allowed to do it? Usually I’d say yes, because named actors help a wide audience to understand important real-world issues through their performances and often the film’s wouldn’t get made at all without star power. But here the film was picked up by Netflix, it was getting made as an exclusive indie attraction no matter what, plus Paul Rudd and Selina Gomez bring with them considerable established audiences. As good as Roberts is, there is no reason why the role of Trevor shouldn’t go to a disabled actor whose opportunities might be few and far between. It’s an unfortunate missed opportunity.

It’s earnest and its heart is in the right place, but too much is misjudged of feels inappropriate to make this one to recommend. The actors are talented, the issues being discussed are real and very relevant to so many, but they all deserve to be better served on film than they are here. SSP

I'm not paid to write about film - I do it because I love it. Favourite filmmakers include Bong Joon-ho, Danny Boyle, the Coen Brothers, Nicolas Winding Refn, Clio Barnard, Steven Spielberg, Guillermo del Toro, Paul Verhoeven, Taika Waititi and Edgar Wright. All reviews and articles are original works written and owned by me. They represent one man's opinion, and I'm more than happy to engage in civilised debate if you disagree.
View all posts by Sam Sewell-Peterson →
This entry was posted in Film, Film Review and tagged Adam Sandler, Black Comedy, Comedy, Craig Roberts, Drama, Film, Jennifer Ehle, Megan Furguson, Movies, Netflix, Paul Rudd, Selena Gomez, The Fundamentals of Caring. Bookmark the permalink.

1 Response to Review: The Fundamentals of Caring (2016)