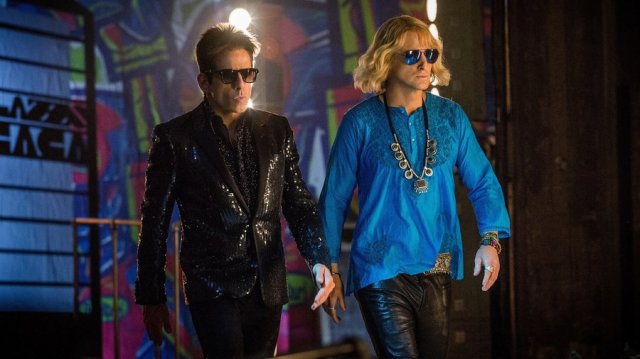 There’s a list out there of sequels that have no reason to exist. While ZOOLANDER may have found a second life as a cult gem, ten years on I don’t think anybody was really clamoring for a second go-around with Derek and co. It was the same with ANCHORMAN 2, but that mostly worked by sticking to the old adage of “Go hard or go home”. ZOOLANDER 2 certainly feels like a re-tread, but it’s not a write-off and a few moments make it almost worthwhile.

Fifteen years after he saved the Prime Minister of Malaysia and following a very public tragedy, supermodel Derek Zoolander (Ben Stiller) retreats from the public eye. He returns to save the fashion world along with Hansel (Owen Wilson) when beautiful celebrities begin dying at an alarming rate and Valentina Valencia (Penélope Cruz) of Interpol’s Fashion Division recruits them. After all, Fashion Prison can’t hold the diabolical Mugatu (Will Ferrell) forever…

There are a fair few chucklesome moments to be found here. Justin Bieber is killed in the opening scene (not a spoiler – it was in the trailer) and has to set just the right Instagram filter for his final selfie. Derek decides to retreat from the public eye and “live as a hermit crab” in “Extreme Northern New Jersey”. Derek refers to his verbose son (Cyrus Arnold) as a “walking tyrannosaurus”. Hansel’s harem now includes a pregnant Kiefer Sutherland. Mugatu is incarcerated in “Fashion Prison for the Criminally Insane and Totally Out There”.

At one point Sting theorises that “There’s only a few genes separating the greatest rock stars in history from male models…the ones for talent and intelligence”. It’s Derek and Hansel’s relentless stupidity that becomes the basis of many of the less-inspired jokes or those that try to repeat what was funny last time round. Of course 2016 Derek would use a selfie stick, and of course he uses one at an inopportune moment and it ends in disaster (which is funny but it doesn’t top the gasoline fight from the first movie).

There’s a terrifying grafting of Fred Armisen’s head on to a child’s body to make him look like someone with a form of dwarfism…for some reason, plus an even more terrifying plastic surgery monstrosity who pronounces “faces” as “feces” and “fashion” as “fish on” played by Kristen Wiig. I think only on of these was intended to be terrifying and I’ve no idea why the other even exists.

You want to see Ben Stiller as a cow centaur? Er, why? OK, you got it. The film is best when it’s at its silliest. The conspiracy at its core is an elaborate dogma joke complete with extravagant Biblical imagery. The finale has Derek and Hansel and a surprise guest trying to stop a lava bomb from blowing up the fashion world and Rome with combined catwalk “looks”.

The film caused massive controversy when an early trailer revealed that Benedict Cumberbatch was playing a transgender model called All. His introduction is immediately followed by a hugely transphobic joke from Hansel that gives the film at this point quite a nasty feel. In context, the scene is only a minor part of the overall story and it is never brought up again. This doesn’t get Stiller and his writers off the hook though, since it doesn’t add anything to the film you have to question why it is there at all? Just to get a cheap laugh from the ignorant?

As comedy sequels go, Zoolander 2 is fine. That’s about it really. It gave me a few good laughs and a few more weak smiles. The jokes are of the same vintage and the characters haven’t changed at all despite the world around them transforming considerably. See it if you have some strange attachment to Derek and Hansel, by all means, but it’s far from essential viewing. SSP