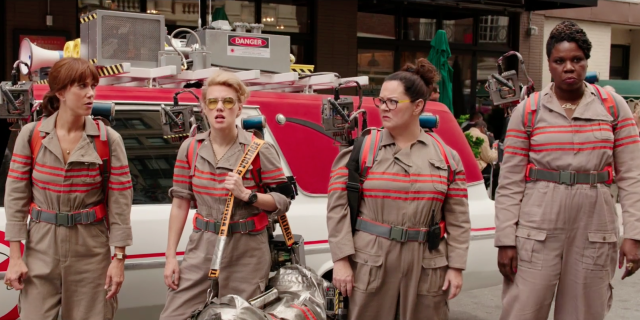 I think I might have mentioned this before, but I’ve never really been that into GHOSTBUSTERS. Paul Feig’s new take has nods to the original and cameos, but otherwise strikes out on its own and largely it’s a successful venture.

When strange apparitions begin to appear across New York City, three academics with a penchant for the paranormal (Kristen Wiig, Melissa McCarthy and Kate McKinnon) and a street-smart subway worker (Leslie Jones) team up as the Ghostbusters to save their city.

Feig’s film makes Ghostbusters scarier than it ever has been. The ghost designs are eclectic, impressively realised, and the horror elements push the boundary of what you can do in a 12A/PG13 movie, notably the genuinely spooky opening of the film. It’s not just because of the modern CGI that this film looks better either – the cinematography is more polished, space is better utilised in the frame and the action scenes are far more inventive and dynamic.

Next to the new Spider-Man, Holtzmann may very well be my favourite film character of 2016. McKinnon eclipses everyone else as the borderline-psychotic engineer with a tendency to dance while operating dual blowtorches, providing the team with a full proton arsenal. Jones is great as well, taking Patty far beyond a stereotype (though still, annoyingly, the non-scientist in the group is again the black person). Wiig and McCarthy have their moments as Erin and Abby but end up essentially having to share the Aykroyd-esque straight-man role. Chris Hemsworth, as we know from his Marvel movies, has really good comic timing, and he relishes playing perhaps the thickest support character in film history, Kevin the secretary.

There are some great zingers – after a ghost is hit and carried off by a train, Patty quips “Well he’s on his way to Queens…and he’s only the second scariest guy heading there tonight!” and the throwaway gag of a tour guide (Zach Woods) describing an “anti-Irish” security fence that used to surround a haunted mansion. I won’t say every setup or punchline lands, but you can’t go far wrong when Kate McKinnon can make just standing there or sitting down with her feet up funny.

What really works in the film is that this team feel a lot more like outcasts. Aside from being women in what is essentially still a boys club (Steve Higgins’ Dean is very surprised to find out their department still exists) they are exploited by the authorities (happy to accept their ghost-busting, less willing to publicly acknowledge them) and their personalities tend to set them apart from the mainstream (Erin and Abby weren’t invited to parties, Patty attracts subway weirdos and nobody really knows what to make of Holtzmann). They also finally establish a motivation for why rational scientists would believe in the paranormal, and this results in Wiig’s finest, most heart-wrenching moment.

Aside from a couple of setup scenes that outstay their welcome, an awful Fall Out Boy cover of Ray Parker Jr’s theme (other musical nods to the original are pretty clever) and a very first-draft villain (Neil Casey, more interesting when he possesses someone else), I have few complaints. There are few things that I’ll wax lyrical about either apart from the beautiful production design, but as I opened with, I’m not a Ghostbusters guy. It is irritating that after a perfectly serviceable finale where the team use their full array of proton gadgets to fight an army of ghosts in an ingeniously choreographed street battle, we have to sit through a second finale which is essentially the finale of the 1984 film re-skinned, but hey, Hollywood likes doing that.

So, the elephant in the room – does it matter that Ghostbusters has been rebooted with an all-female cast? Not in the slightest. The gender of the Ghostbusters has no impact on their ability, their motivations or the story. Even if you’re clinging to the characters, the new carriers of the proton packs fit pretty comfortably into the same archetypes. Anyone who was clamoring to finally see a proper third film with the original cast, I have to ask what would the story be? Older past-it Ghostbusters forced back into the job and the hearts of New Yorkers when a new supernatural threat emerges? That’s the plot of Ghostbusters II. If I’m honest the cameos by the orignal cast here don’t all work. Dan Aykroyd, Ernie Hudson, Sigourney Weaver and Annie Potts all have fleeting, amusing appearances, but Bill Murray is given an extended scene where he looks like he’d prefer to be anywhere else. Coming back many years later to tell the same-but-different story has a really patchy history. For every FORCE AWAKENS you’ve got a KINGDOM OF THE CRYSTAL SKULL.

The Ghostcorps thing – complete with prominent and shiny logo placed before the film’s opening – is both concerning and depressing. Sony, in their wisdom, have decided that Ghostbusters deserves the “Shared Universe” treatment of many connected films (much like they mistakenly thought with SPIDER-MAN) that Marvel have exploited so well, so have created a whole sub-studio to handle this. This is the most worrying thing, not that anyone dared to remake Ghostbusters or that they’re women now. The film does its job, providing a fresh take on a familiar story that delivers laughs and thrills more often than not. It’s the studio that might be heading for disaster. SSP