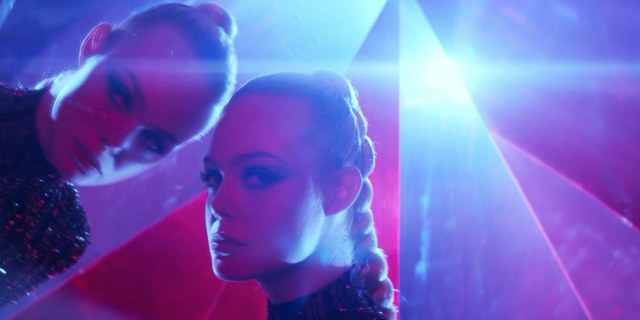 The fashion industry really is taking a kicking from film this year. Far from the silly and playful taunts in ZOOLANDER 2 and ABSOLUTELY FABULOUS, now Nicolas Winding Refn goes for the jugular with THE NEON DEMON. Being a Nicolas Winding Refn film, there’s a whole lot to unpack here. I’ll do my best and try not to get lost in all the bright lights and hedonism along the way.

16 year-old small-town dreamer Jesse (Elle Fanning) moves to LA to attract the attention of a modelling agency. She is a natural beauty and walks into high-profile jobs despite her inexperience, but is at risk of losing her soul to the cruel, base industry she loves, not to mention the immediate danger of jealous rivals and those who would exploit her.

I think all of Refn’s films are about confused identity, alienation and a failure to communicate to a large extent. Much like how Ryan Gosling’s almost-silent character in DRIVE could only express himself through violent action, the models in The Neon Demon can only live vicariously through others. It’s almost the exact negative of The Driver’s arc, who was fighting to become human, to grow beyond his function and his profession, whereas Fanning’s Jesse wants to become only an image, losing her humanity, her sense of reality, in the process.

Fanning is phenomenal here. She imbues Jesse with a wonderful nervous energy before allowing her to be consumed by pride and struggle to subdue her ecstasy at being born better than everyone else. The supporting players including Jena Malone, Bella Heathcote,  Abby Lee, Alessandro Nivola all play one of many shades of repulsive, but for once it’s a pretty even split between despicable men and the women, with neither gender demonised more than the other, just the industry they are part of. Christina Hendricks has a scene as an agency executive and is perhaps responsible for the only flicker of genuine kindness in the film by advising Jesse of what to expect (shortly before brutally dismissing another hopeful). In another small role Keanu Reeves gives his best peformance in years as a seedy and lurking owner of a motel frequented by junkies and prostitutes, perhaps suggesting that even close proximity to the vanity of the LA modelling world is corrosive.

The film (photographed by Natasha Braier) is long and indulgent in its pacing but there’s rarely not something interesting to look at. Refn doesn’t really do subtle (he even has his initials emblazoned over the opening credits seemingly as a stamp of quality) but the boldness of his imagery and the symbolism therein marries well with the industry he is discussing. A mountain lion gets into Jesse’s motel room just before she commits to being a full-time model. A photographer (Desmond Harrington) walks Jesse into the empty, emotionless white void of his studio backdrop. There are more mirrors and people staring into them trying to comprehend their image than at a funfair hall. A key and increasingly trippy scene has Jesse waiting to take to the stage and the bright neon geometric shapes adorning the walls change from innocent blue to sinful scarlet just as she crosses over and relinquishes her empathy, her own image utterly consuming her.

The film constantly subverts your expectations of where the threat will come from. Jesse fears the creepy overseer of her apartment block, she’s wary of pretty much every man she meets until they help her satisfy her own ends, but she never even considers that her ambition might be severely damaging, or that her fellow models are out to destroy her.

Refn and kindred spirit composer Cliff Martinez are masters of combining a strong aesthetic with a sumptuous soundscape to tell a story. While Refn as a filmmaker still hadn’t topped Drive, I think this might be Martinez’s finest work to date. Much like the story being told his electronic music is equally beautiful and ugly, atmospheric and oppressive, climbing, falling, disintegrating and transforming just as the characters do.

A lot has been said about a scene about two thirds of the way through the film. From this disturbing image onwards, everything becomes quite bizarre and deeply unsettling. Here it graduates from psych-horror to full-blown horror. I don’t think this final stretch quite worked, I’m not sure what everything meant, what exactly is supposed to take place or whether Refn wanted us to know, but suffice to say it becomes the stuff of nightmares.

It’s very appropriate that Refn apparently got Fanning to watch BEYOND THE VALLEY OF THE DOLLS in preparation for this film, as they share a lot of DNA in their story arcs and general structures. The Neon Demon is arguably far deeper and looks much better, but Russ Meyer and Roger Ebert’s guilty pleasure also acted as an expose of a self-obsessed profession, and the two films would make an interesting double-bill.

I can’t say that this will be one for everyone. The Neon Demon completely split its audience at Cannes, much like Refn’s previous difficult watch, ONLY GOD FORGIVES. The rather twisted Danish-LA explorer of the id has said he was rather happy with this reception, that it was what he is going for – to provoke debate. He’ll have certainly done that here, and the fashion world aren’t going to forgive him for attempted murder of their industry any time soon. SSP