Posted on November 30, 2018 by Sam Sewell-Peterson 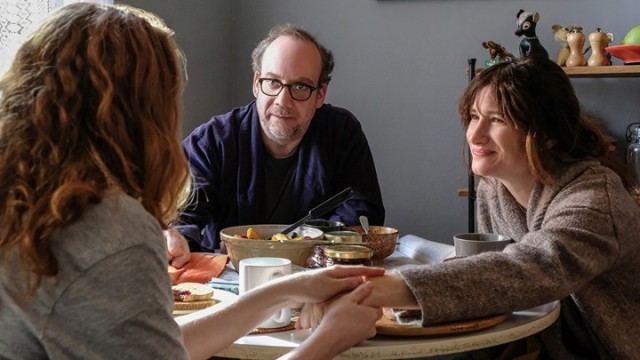 Netflix are having a pretty stellar year of original content. I mean, the bad stuff is still pretty bad, but the good stuff is really good and often takes you by surprise. I didn’t really know what to expect from PRIVATE LIFE beyond Paul Giamatti and Kathryn Hahn being reliably great. They are that, but this also turned out to be one of those delightful film surprises of 2018. I’m going to remember this emotional rollercoaster for a long time, and I think you will too.

After trying unsuccessfully for a baby for several years, writers Rachel (Kathryn Hahn) and Richard (Paul Giamatti) decide to undergo IVF treatment. As their relationship bears this added strain, their niece Sadie (Kayli Carter) takes a break from college and comes to stay.

Everyone feels so real here. Rachel and Richard are a couple who love each other deeply but who can’t help blurting out embarrassing secrets at inappropriate moments, can’t resist taking little digs or saying exactly the wrong thing at the very worst time (Sadie shares this family trait of not thinking before speaking). They look like us, they act like us, when they’re around the house they don’t wear pants (in both in the American and British sense).

Rachel and Richard are trapped. They have been through so much, hit so many hurdles and they still have to keep spending and hoping to get anything out of this. They have to get pregnant before the money or their time runs out or else they will have wasted both. This must be the story and the struggle for so many expectant couples. The film was inspired by the real struggles of writer-director Tamara Jenkins undertaking fertility treatments and this adds that essential level of grounding and authenticity.

Hahn is the emotional core of the film throughout, but Giamatti gets perhaps the standout moment when the normally pragmatic Richard finally breaks and considers throwing in the towel, exclaiming “I just want my life back…I’m just some guy who injects hormones into your ass every night!”. Elsewhere, the new gold standard is set for awkward escalating movie dinner scenes. That’s particularly impressive as let’s be honest, all movie dinner scenes are awkward and escalating, that’s why you put a dinner scene in your movie, not so your characters can eat and make merry but to try them.

Discussions of morality are by no means shirked. Rachel and Richard’s relationship dynamic with Sadie is odd to say the least, as when she offers to be their egg donor she is essentially acting as both a co-parent and daughter to them. The film doesn’t make judgements about what they are asking her to do, or the somewhat dishonest way they keep their bases covered elsewhere, but it acknowledges that there is a lot to unpack in this situation.

If it wasn’t for BLACKKKLANSMAN absolutely killing it, Private Life would have the most memorable, powerful final moments of any film of 2018. Think CALL ME BY YOUR NAME but much more dialed back and optimistic. Private Life is painfully honest, bittersweet and I only slightly hesitate to say, important. So what are you waiting for? Boot it up – it’s not a downer, I promise. You’ll laugh, you’ll cry and your heart will be all filled up. SSP