Posted on November 28, 2018 by Sam Sewell-Peterson 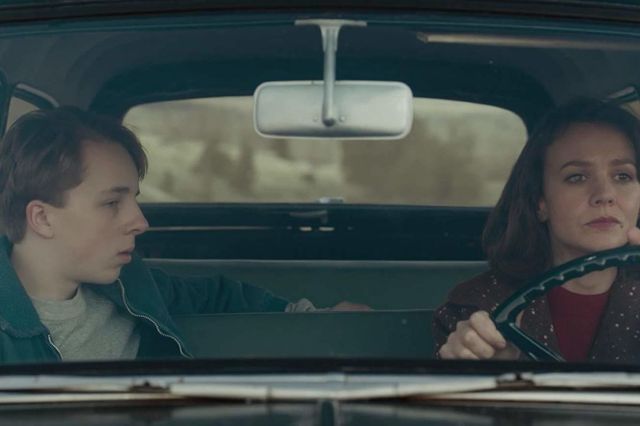 Can we at least have the radio on?: June Pictures/Nine Stories Productions

I’m not yet 30 but WILDLIFE makes me feel old. Paul Dano was the stroppy teenager in LITTLE MISS SUNSHINE, now he’s directing movies. The ever-youthful looking Carey Mulligan and Jake Gyllenhaal are now old enough to be playing the parents of a teenager. Why is time in such a hurry?

In sleepy Montana suburbs in the 1950s, young Joe’s (Ed Oxenbould) comfortable home life is shaken when his father Jerry (Jake Gyllenhaal) loses his job out of the blue. Jerry’s coping strategy is to go off and fight raging forest fires and his mother Jean (Carey Mulligan) makes some equally questionable decisions while her husband is away, leaving Joe to support himself and cope alone.

Wildlife really is a teenager’s-eye-view of domestic life falling apart. All eyes are on Joe, so the camera often lingers on his reaction to the questionable actions of others happening offscreen, and it is testament to Oxenbould’s already finely-honed skills that you can always read what is going through Joe’s confused head. Acting performers Gyllenhaal and especially Mulligan off the screen is no mean feat. The trio have a grounded and believable family chemistry and the dynamic of the household is knocked completely off balance the moment one of them is out of the picture.

You could flip a coin to decide who is the least suitable parent as both make such rash and stupid decisions seemingly as much out of spite for each other as to save the family from its immediate difficulties. And of course they blame each other for everything that inevitably goes wrong, but Joe would be quite right (but too mature and well-adjusted to) ask them to consider what they are doing to him. His parents are both completely self-centred and far less mature than their teenage son. Jerry does what he does out of obscenely overcompensating for his wounded pride, Jean seems to be trying to reclaim her (really not that distant) youth and reassert the authority she already held in their household. You really struggle to get in their headspace to understand any of their decisions; they are completely irrational and without a thought for what really matters.

Joe is one of the most pragmatic teen characters I think I’ve ever seen on screen. When our time with this family finally draws to a close, only one of them is really coping with their lives undergoing such massive changes over a short period of time, and by rights it shouldn’t be him. He doesn’t have time to act his age, go through all the usual teenage experiences and work out who he is because he is left to parent himself. As soon as his mother becomes more interested her social life than her son, he goes straight out for groceries and starts to look for an after school job to support himself, and you suspect, stay out of her way.

The film is full of particularly relevant and resonant imagery echoing the devastating wildfires that have ravaged California this year (a particularly unhappy accident as the film was well into production by the time the disaster hit). Fathers leaving for the fires with their families staring after them, like soldiers going to war the decade before. You do wonder which among them had the experience necessary to make a difference and how many, like Jerry, were looking for any means of escape.

This is an incredibly sure-handed directorial debut from Dano. He tells the kind of story that he is so often cast in, but with his, and writing partner Zoe Kazan’s own take on the material. It’s intimate and emotionally raw, about coping and not coping with real mistakes. I hope Dano keeps up his work in front of the camera as well as behind it, but if the former needs to take a back seat to the latter, Wildlife is a calling card that makes you take notice. SSP

I'm not paid to write about film - I do it because I love it. Favourite filmmakers include Bong Joon-ho, Danny Boyle, the Coen Brothers, Nicolas Winding Refn, Clio Barnard, Steven Spielberg, Guillermo del Toro, Paul Verhoeven, Taika Waititi and Edgar Wright. All reviews and articles are original works written and owned by me. They represent one man's opinion, and I'm more than happy to engage in civilised debate if you disagree.
View all posts by Sam Sewell-Peterson →
This entry was posted in Film, Film Review and tagged Carey Mulligan, Drama, Ed Oxenbould, Jake Gyllenhaal, Little Miss Sunshine, Paul Dano, Wildlife, Zoe Kazan. Bookmark the permalink.