Posted on October 5, 2018 by Sam Sewell-Peterson 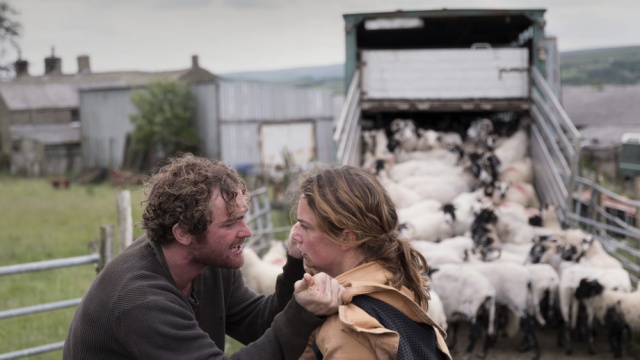 You have to love your family, but…: BFI/Left Bank Pictures

It’s been a pretty great few years for Yorkshire film and it’s also been an unexpectedly verdant trend of dramas set in the world of farming. Of course there are only going to be more films like this that focus on, or heavily feature, the inevitable death of farming with Brexit in full(ish) motion. Maybe there needs to be a new, more rural term for these films, instead of kitchen sink drama. Cow shed drama maybe? DARK RIVER, as the title implies, may be the bleakest of this film trend yet.

Alice (Ruth Wilson) returns to the family farm following the death of her abusive father (Sean Bean) and immediately clashes with her brother Joe (Mark Stanley) over money, attitudes to farming and who their father really was. Will the farm and the family survive so much bad blood?

One sibling bears the weight of the world on his shoulders, the other carries the weight all held behind her eyes. It’s a very effective dramatic dichotomy. There is so much packed into Wilson and Stanley’s performances, so much that is unsaid but clear as day to anyone watching them intently. Sean Bean isn’t in it a lot, but his presence looms large. He essentially gets to play a ghost for the first time in his career, which is a pretty interesting change of pace for an actor who famously dies so much on screen.

Alice and Joe hold very different, irreconcilable experiences of who their father was. “Did he suffer?” Asks Alice unfeelingly. “Yeah, he did”. When we realise the one aspect of control Alice gained over the abuse at her father’s hands you feel your stomach drop.

The Bell siblings also clash over their very different attitudes to farming, both understandable of large extent, with Joe promoting nature unfettered and Alice with an eye on what is best for the livestock and the business. Using either method is fighting a losing battle in their crumbling industry and their farm is shown to survive more by the kindness family friends (feeling sorry for Alice’s bereavement and having to put up with her brother) than as a viable business. Of course it’s not really about the farming, and you suspect even if they agreed on the method to rear and sell their cattle they would still clash as a subconscious lashing out at all the poisonous family history.

Let’s not beat about the bush, it’s not a laugh a minute. This is a film about trauma and how it impacts your whole life, and the lives of those closest to you. You have to wonder if there was ever a simpler, happier time for Alice and Joe, or whether their dad’s presence always infected their family and ruined lives.

We never find out whether their mother was part of their childhoods, whether she kept Richard in check or whether her absence somehow escalated his monstrous behaviour. The ambiguity behind the Bell family structure is one of the reasons the film lands so forcefully. Whatever factors effected the horrific situation Alice found herself in, it was abuse that happened, repeatedly, was allowed to keep happening and left her with deep scars.

Dark River is about never being able to escape the shadows of your past. Alice put up walls and kept busy in order to get on with her life, but her forced return home and seeing the state of things brings everything flooding back. Her father’s actions were inexcusable and that old adage about having to love your family starts to look pretty porous, especially as she receives such animosity from her brother, let alone sympathy. It’s been too long since Clio Barnard’s last film. Her work could be described as downbeat, but she always comes from a real place, completely gets humanity, our flaws and the struggle many face daily just to survive. SSP