Posted on September 13, 2017 by Sam Sewell-Peterson 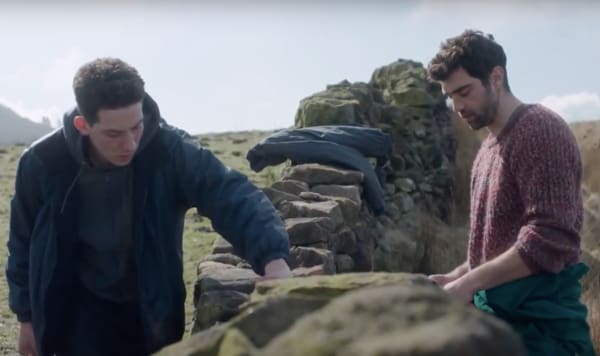 
I’ve wandered a fair bit around Brontë Country over the years, but I’ve never seen it quite as stunningly presented as in GOD’S OWN COUNTRY. Much like some of the best British films of the past few years, such as RADIATOR and THE LEVELLING, this rural Yorkshire romance utilises the British Isles’ uniquely desolate brand of beauty to match the heady emotions of love and passionate yet petty family squabbles.

Johnny (Josh O’Connor) is a young farmer without passion or drive, barely able to keep the family farm afloat and only blackout-drunk nights out to keep him sane. When his increasingly frail father (Ian Hart) hires help for the busy lambing season, Johnny finds something to live for with the arrival of Romanian migrant Gheorghe (Alec Secareanu) .

Farming is dying, and this death is only accelerating thanks to Brexit. The film takes great pains to regularly remind us of this changing landscape (though it was in post-production by the time of the referendum). Look at the scene when Johnny takes a cow to market, a room full of old boys aren’t going to be around forever, or the industrial farm we see at the end seemingly manned entirely by migrant workers. This essential processes, hard work that keeps society fed and warm, from lambing to putting down animals and using the woolly fleece (and scent) of a dead lamb to give a runt a chance of survival, are presented full-on and matter-of-factly. These scenes could only have been achieved so convincingly if they were for real, which they are. It must have been an interesting audition for the two leads, not only bringing chemistry and passion but a willingness to live and work as farmers for a few weeks. Speaking of which, what a double breakthrough for O’Connor and Secareanu.

I’m from the same area the film is set and filmed in, “Bradford, or somewhere”, but I’m a city boy. I could not live this harsh a life of early mornings, long days and longer winters and subsisting on pot noodles when you need to keep a closereye on the sheep. Be on the look out for shared locations with 80s classic RITA, SUE AND BOB TOO, this story explores very different thematic territory, but gets pretty dark and intense at times as well.

I’m a big fan of THE ROYLE FAMILY, and the best episode of that Northern sitcom had Nana finally confess to her long-suffering, ever-patient daughter, “I do love you Barbara”. There is a moment like that in God’s Own Country, with Johnny and his cantankerous father finally showing vulnerability to each other, that absolutely floored me.

Talk about sex appeal. Not so much the full-on, sometimes rough gay intercourse, but between Johnny’s sheepish smile and Gheorghe’s big sexy jumper I can completely understand if this becomes a favourite in LGBTQ Cinema. Their relationship has a real power to it, as well as heady love-almost-at-first-sight there is an honesty that doesn’t try to sidestep Johnny’s sometimes abrasive and self-destructive side or Gheorghe’s idealistic views on romance and how he doesn’t quite fit into the world (especially the UK and Europe) the way it is.

If I’m being ultra-critical, the pub scene doesn’t quite convince (especially if you’ve been in said pub and have never seen it quite so quiet) and the film could have ended a few shots sooner to make it feel a bit less tidy and more real.

What a punchy, passionate debut from writer-director Francis Lee, born and bred in Keighley, West Yorkshire and basing a lot on his own experience as the son of a farmer. It’s telling that this film was fighting for funding against The Levelling (which secured a release first), another farming drama and another of my favourite films of 2017. I guess there’s (sadly) only so much support to go round for small grounded movies filmed and set in the UK (thanks Brexit). SSP

I'm not paid to write about film - I do it because I love it. Favourites include Bong Joon-ho, Danny Boyle, the Coen Brothers, Nicolas Winding Refn, Steven Spielberg, Guillermo del Toro, Taika Waititi and Edgar Wright. All reviews and articles are original works owned by me. They represent one man's opinion, and I'm more than happy to engage in civilised debate if you disagree.
View all posts by Sam Sewell-Peterson →
This entry was posted in Film, Film Review and tagged Alec Secareanu, Drama, Francis Lee, God's Own Country, Ian Hart, Josh O'Connor, Radiator, Rita Sue and Bob Too, Romance, The Levelling, The Royle Family. Bookmark the permalink.