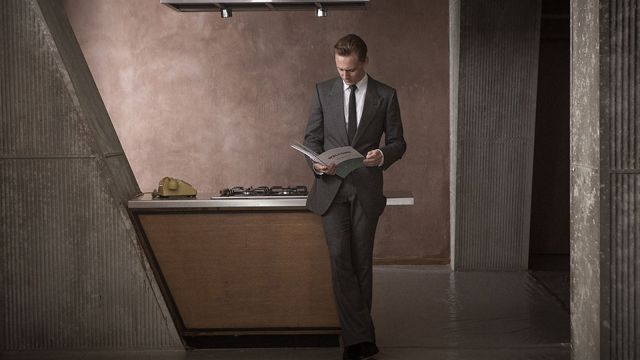 Grey is in this season: Film4/HanWay Films

Like all of Brit Wunderkind Ben Wheatley’s films, HIGH RISE is a fascinating concoction. Bold in tone and extremely stylish, it also ends up being his most inconsistent work to date.

In a dystopian  1975, Dr Robert Laing (Tom Hiddleston) moves into an imposing tower block where residents where society is split with the rich inhabiting the opulent upper floors while the bottom rung of society is left to fight for finite space lower to the ground. Laing is caught up in the chaos when volatile artist Richard Wilder (Luke Evans) sparks a rebellion over dwindling resources, while the tower block’s mastermind Anthony Royal (Jeremy Irons) watches his creation tear itself apart.

High-Rise is without doubt the best-looking film Wheatley has crafted, with care and attention going into designing every shot and set to make the viewer feel introspective and uneasy, a task helped no end by Clint Mansell’s superb electro-classical score. The mirrored lift scenes featured in the trailers are beautifully lit and key for externally conveying character’s inner turmoil and one ultra-slow-motion death that ends the first act will remain branded on my mind for a long time. On the action front, Wheatley finally has a moderate budget enough to mount a couple of frighteningly primal brawls, but don’t go in expecting THE RAID.

The themes work in broad strokes, adding class conflict and inequality to Wheatley’s usual go-to exploration of the dark side of humanity. Annoyingly, as the film progresses the message Wheatley and writer Amy Jump are trying to convey becomes increasingly muddy and indistinct. Whereas the first half of the film is an entertaining satire with raucous parties, witty asides and Hiddleston peeling the face off a cadaver, following a key skirmish about halfway through the film collapses under the weight of its own self-importance. JG Ballard’s novel had a series of divisive British governments to attack (even seeming to predict the evils of Thatcherism), but despite the film retaining a sort-of 1970s setting there is now little relevant socio-political context. David Cameron’s government have pushed through some unpopular policies under the guise of austerity, but he doesn’t quite raise the level of bile ripe for satire that the governments of the turbulent 1970s did (yet). The story is more about warring classes than particular sections of society being victimised (a criticism of Cameron’s governments most unpopular policies) and the British class system is now much harder to delineate so a sense of immediacy and relevance is lost for a contemporary British audience.

Broadly the film can be described as, what if the 1970s and all its societal problems happened in a tower block? As such I found myself thinking a lot of SPACE STATION 76 (what if the 70s happened in space?) in the way ever character behaves and looks period-appropriate in an unusual setting. Chain-smoking, bad hair and fashion, archaic attitudes to sex and gender, self-made professionals clashing with artists and the rich elite. It might have been nice to see a wider cross-section of society contained in this troubled world, or at least someone who isn’t rich, white and heterosexual or poor, white and heterosexual. OK, Reece Shearsmith’s character might not have been strictly heterosexual, but his character is incidental.

Hiddleston as Laing serves as our window into this world, but as a character is unfortunately about as interesting as the wall he paints in his apartment (what would you call that colour, blueberry yoghurt? That’s how interesting Laing is). As a social high-riser he can basically be summed up by the famous sketch from THE FROST REPORT: “I am middle class so look up to him but look down on him…”. Though he is the face of the film and his most marketable name, Hiddleston is completely outclassed by a feral Luke Evans and incredibly expressive child actor Louis Suc. It’s good to see Jeremy Irons working for his paycheque again as the high-rise’s coldly watchful architect and James Purefoy just makes such a good upper-class twit. Elsewhere it can be like watching a BBC comedy highlights package such is the array of British talent Wheatley has filled out the ranks of his cast with.

Despite being a little half-baked in its ideology, High-Rise boasts the same dizzying imagination, swaggering style and anarchic energy present in all of Ben Wheatley’s films. I may not be able to fully lose myself in this retro-dystopia and you might not be able to either, but it stays with you, that’s for sure. SSP