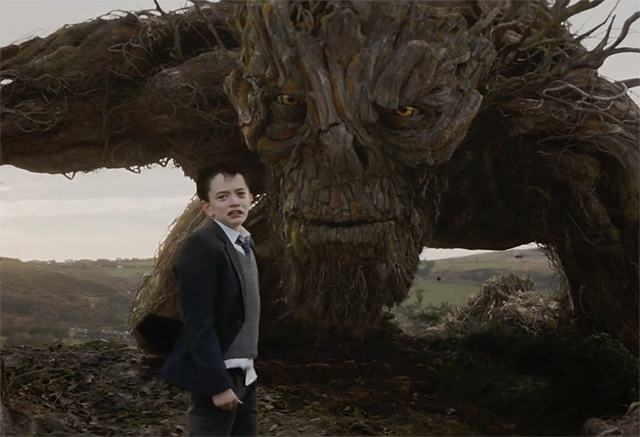 I read A MONSTER CALLS over Christmas in preparation for this. What took me so long?

Conor (Lewis MacDougall) doesn’t have the luxury of a happy childhood. Between his mother (Felicity Jones) losing  her battle against cancer, his icy grandmother (Sigourney Weaver) outstaying her welcome and constant torment at school, Conor finds himself coping alone. Then, at his lowest point, a monster calls…

Having Liam Neeson on board to play the Monster and also someone else in the form of a photograph on the mantelpiece is a master stroke – here Patrick Ness adds a certain extra poignant factor to the self-panned screenplay adaptation of his story. Advantages of authors being part of the process of visualising their own work include but are not limited to, unparalleled understanding of the source material and the need to refine and improve what has come before. Having another pair of eyes guiding the ship doesn’t hurt either, and director JA Bayona keeps the whole thing simultaneously grounded and wondrous and gets the very best out of his cast.

It’s great to see Sigourney Weaver in a non-glamerous role. She begins as Grandma is described in the novel; a well-groomed and severe older woman, but as events unfold, protective layers peel away and she becomes worn away, real and human. But it is the tenderest of central pairings in Conor and his mum and MacDougall and Jones’ perfectly-pitched performances that keeps you rooted to this story. It’s a complex relationship for a thirteen-year-old to have with a parent, but one that rings painfully true. It is a simple truth at the heart of this tale, but not an easy one.

There are canny references throughout to sympathetic monster movies (KING KONG, Universal’s FRANKENSTEIN) which might have been a bit presumptuous if A Monster Calls couldn’t proudly stand side by side with its subgenre fellows. We also get thematic and aesthetic links to other modern fantasy allegories like PAN’S LABYRINTH, being as it is another tale featuring a child’s experiences front-and-centre but presented in a very adult fashion, though Bayona perhaps chooses to blur the lines blur a little more between realities than del Toro did.

The animated sequences with Neeson’s narration are the perfect realisation of the book’s stories, and the film wholeheartedly embraces the unique advantages of working in a visual medium. The three tales the monster tells to Conor are living ink, bold and graphic but  never fully tangible to fit with Ness’s themes of avoiding confrontation of difficult situations and as tribute to the work of Jim Kay who illustrated a run of the novel. It was a tall order to visualise squiffy dreamland physics and the horrific jumps between reality and unreality with such aplomb, but somehow it works as a compelling tapestry.

You can almost hear the production design team screaming “don’t do an Ent!” so the Monster instead appears as a yew tree tangle in rangy humanoid form with Liam Neeson’s sharp profile and formidable glower as his booms forth his dialogue. He is frightening, as any monster should be, but he is also engagingly, and humanly, irritable, and somehow his outbursts that shake the earth and bring forth an internal inferno soften him and bring him closer to our human protagonists – he’s just as fallible an occupier of grey areas as the rest of us.

I honestly didn’t think A Monster Calls would get me. The book brought forth tears but I found myself not quite shaken with the same emotional force as I was on the page. Then the final couple of scenes came and I’ll admit I bawled. I’d have personally played the ending slightly differently in the way it’s put together on screen, but that’s really splitting hairs and it remains a spiritually satisfying conclusion and a promise that a better life is to come for Conor. You’ll have to catch this at some point as it may very well be a future classic. SSP