How catchy is the title of this piece? Anyway, isn’t streaming brilliant? Convenience and value for money aside, so many interesting documentaries that might otherwise have never found the right outlet for release can now be beamed straight into your curious eyeballs at a time of your choosing. Here are just two of the most notable, made for, and available now, on Netflix.

MY BEAUTIFUL BROKEN BRAIN (2014/16) In 2011, Lotje Sodderland suffered from a stroke at the age of 34. This is her story told in a manner only possible because it comes from a dynamic artist. Lotje’s terrifying and life-changing experience is reconstructed in chilling and immediate fashion, the visceral footage adding real weight to the standard family and friends talking heads giving their recollections on the event. The first time we actually see Lotje she makes a very pragmatic statement straight to camera, cheerily confirming that “I’m definitely not dead”. Lotje then graciously allows us to follow her recovery process, talking directly to us throughout, of rewiring her brain every slow and painful step of the way.

The documentary certainly makes you appreciate how much we as a species take communication for granted as we watch a witty and erudite adult grapple for the simplest words that elude her, having to attempt to re-learn to speak, read and write almost from scratch. We obviously can’t experience precisely what Lotje is going through but she, a filmmaker herself, and fellow filmmaker Sophie Robinson who was enlisted to get this most personal of projects off the ground, know how important it is to make your audience go through something other than pity. If there was one thing I wasn’t expecting in a serious documentary, it the film’s effectively otherworldly Lynchian horror visuals (a certain bequiffed filmmaker just may make an appearance later on). The slightly off, eerie imagery  combined with Lotje’s magnetic personality and superhuman struggle makes MY BEAUTIFUL BROKEN BRAIN not just a must-watch, but a must-experience. It’s frightening, contemplative and artistic without style ever overtaking substance. 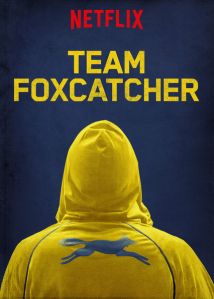 TEAM FOXCATCHER (2016) As creepy and fascinating as this true story is, this documentary has the misfortune of coming out the year after Bennett Miller’s superlative drama FOXCATCHER. What the documentary gets across that the feature arguably did not is the desperation of many of the young athletes living and training on John du Pont’s farm. Some had nothing but the clothes on their back and a born talent for wrestling, those better off still had to worry about supporting their families when they inevitably retired, so no wonder did they all take up his offer of unlimited resources and zero real-world distractions.

The wealth of archive footage is mesmeric and it really gets across what an open and charming sporting prodigy (one tragically caught in the wrong place at the wrong time) Dave Schultz was, all the while keeping his murderer John du Pont elusive and sinister, tragic and pitiable, try as he might to beguile. None of his quirks that were dangerously indulged by those around him were exaggerated in popular media, but some, like du Pont claiming to be the Dalai Lama when he wore red or his belief that he could control the weather, or the firing of brilliant athletes because they were black, “the colour of death” come to startling light in this documentary. You’re also allowed to get to know the Foxcatcher community – all the athletes from over the world living on the farm together with their families, all these people whose lives were destroyed by the actions of one deeply disturbed individual. With all the evidence laid out before you, you can see that there were warning signs, but how were those involved ever meant to know how far it would go? This is a thoughtful gut-punch of a documentary feature. SSP