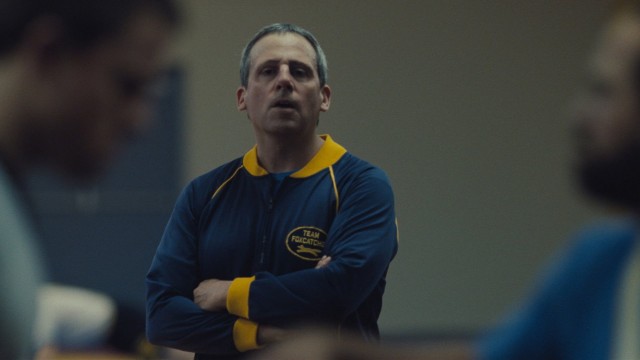 Director Bennett Miller’s movies tend to take a sideways view on real life. Everything about his filmmaking style is restrained, but the stories he chooses to tell (or re-tell) are so odd and remarkable you really couldn’t make them up. FOXCATCHER might be Miller’s most downbeat film to date, but it’s also an enthralling slow-burning character piece that explores heady themes through a close study of what a passion for sport, whether you’re a competitor or not, can do to someone.

In the late 1980s, millionaire philanthropist and sport enthusiast John du Pont (Steve Carell) began his patronage of the American professional wrestling team. Taking Olympic gold medal winner Mark Schultz (Channing Tatum) under his wing and into his home, du Pont also turned his vast estate into a training facility for “Team Foxcatcher” in the hopes of sharing in his athletes’ glory. Yet his real desire was to work with Mark’s elder brother and fellow Olympian Dave (Mark Ruffalo) who is far less willing to submit to a mentor offering him his dreams on a platter.

John du Pont isn’t a showy antagonist. There’s no spectacle about his introduction, no long corridor and swelling score before Clarice Starling meets Hannibal Lecter in THE SILENCE OF THE LAMBS. This was a real man, a real disturbed individual, not a pantomime baddie, and we first  meet him in an unremarkable wide shot.

When we finally get a good look at him, du Pont looks equally drawn and fleshy, as unwell physically as he is mentally unstable. Carell behind the remarkable makeup is almost unrecognisable, and doesn’t resort to unnecessary tics and affects. It’s a subtle, chilling turn from the actor formally known as Brick. You often can’t quite put your finger on what makes du Pont so frightening, just that something is very, very off about him. He’s at once over-familiar and removed, confident and awkward. He’s also narcissistic to the extreme, for evidence just look to the amusing/uncomfortable helicopter scene with du Pont coaching Mark on exactly how to introduce him at a dinner they are attending all the while off his head on “just cocaine”. Another key scene in understanding this story is when Dave Schultz, try as he might, can’t in good conscience lie to a documentary filmmaker and say that du Pont is a good coach, much less a mentor figure. While it’s mostly very serious, hard-going stuff, there is a certain amusement to be had at du Pont’s inflated perception of himself, especially when you notice no-one around him is taking him seriously, beyond instinctual wariness of an eccentric.

While Carell has been gifted the meatiest role, Tatum and Ruffalo make Mark and Dave siblings that are believably loving, supportive, but always removed in a very male way. The Schultz brothers clearly have serious problems of expression and communication. It’s equally amusing and sad to see that when they hug each other they automatically revert to a wrestling position rather than showing any genuine human affection. Speaking of the wrestling, Tatum and Ruffalo have clearly put in bucket-loads of blood sweat and tears to look convincing as world-class wrestlers (not to mention Ruffalo committing to a truly unenviable haircut) and all of the wrestling matches we see have a visceral impact, excitingly punctuating a tense and talky drama. Looking in from the outside, you wonder how the Schultz brothers ever fell for du Pont, but at the same time we can’t really blame them for being drawn in by the great rewards he offered.

There are a coupe of minor drawbacks to this otherwise excellent film. I don’t know why Vanessa Redgrave bothered to turn up for what couldn’t have been more than a day’s work as John du Pont’s dressage-loving shut-in of a mother, and her character only seems to be in the story to give its villain some mommy issues to add to already impressive list of neuroses. Time seems to pass in fits and starts too, almost as if in an effort to keep the story organic and unobtrusive, Miller doesn’t seem to want to time stamp his story unless he has to (like when a specific wrestling match is being portrayed). This is fine, but it does give the impression that events happened far more spontaneously than they did in reality, over months rather than many years.

Foxcatcher is a story about ambition and ego, pride and the corrupting power of certain lifestyles. It doesn’t demonise John du Pont, nor does it elevate the Schultz brothers to tragic, heroic American heroes. They are all just human beings made what they are, and are not, by circumstance. The impressive set pieces and the inky black mood of the film will draw you in, the performances will floor you. SSP

I'm not paid to write about film - I do it because I love it. Favourite filmmakers include Bong Joon-ho, Danny Boyle, the Coen Brothers, Nicolas Winding Refn, Clio Barnard Steven Spielberg, Guillermo del Toro, Taika Waititi and Edgar Wright. All reviews and articles are original works owned by me. They represent one man's opinion, and I'm more than happy to engage in civilised debate if you disagree.
View all posts by Sam Sewell-Peterson →
This entry was posted in Film, Film Review and tagged Bennett Miller, Biopic, Channing Tatum, Dave Schultz, Drama, Film, Foxcatcher, John du Pont, Mark Ruffalo, Mark Schultz, Movies, Sport, Steve Carell, The Silence of the Lambs, Vanessa Redgrave. Bookmark the permalink.