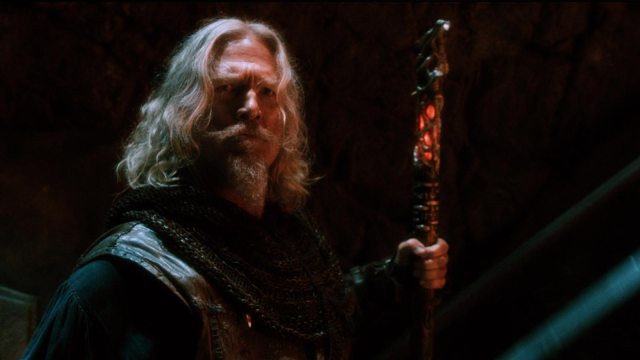 I have a confession to make…I rather liked SEVENTH SON. But this isn’t going to be one of those times where I’m going to defend a much-derided work to the ends of the Earth. Seventh Son is pretty bad, there’s no getting around that. But badness can be glorious, endearing, even enjoyable if – counter-intuitively – it’s done right.

Jeff Bridges is at that stage in his career now – he’s an established character actor and former heartthrob, but he’s got his Oscar now and can keep his career ticking over by playing grouches. Julianne Moore too has paid her dues and graciously accepted her awards, and has never been above alternating between prestige pieces and more entertaining, trashy fare. Both do pantomime so well here they should seriously consider moving to the UK.

The script, story, characterisation mostly doesn’t work. The mythology of this world is complete hokum, and characters make quite baffling decisions in their journey through it. I’m reminded of a quote from the late Terry Pratchett that most fantasy “just rearranges furniture in Tolkien’s attic” and that seems to be the case here. I’m not aware of his accurate an adaptation of the books the final film is, but the resulting mixture, full as it is of clashing lifts from European history and every fantasy author under the sun, does little to inspire. It never feels like a complete, self-contained world that makes sense on its own terms, we’re just presented with new rules as a when the filmmakers see to allow for the plot to limp on. It’s not painful to sit through, and it’s all entertaining enough, but you actively have to disengage your brain.

There’s a fun drinking game you can play while watching Seventh Son – take a good swig every time Jeff Bridges sounds like he’s about to choke on his false teeth. You’ll be inebriated in minutes! Apparently he decided to wear them because he thought Master Gregory, living in the Medieval-esque time he does, should have really bad teeth. Then the hair and makeup people slapped a massive beard on his face so you can rarely actually see his teeth. Following this, Bridges seems to have re-dubbed most of his lines with that seriously weird voice he’s chosen so now he sounds a bit like Bane from THE DARK KNIGHT RISES.

The key thing that, for me, prevented the film from collapsing under the weight of its own preposterousness was how earnest all the actors were. Yes, the story and script are stupid, but the performers are fully committed to it, and are clearly having a lot of fun with what they’re being asked to do as well. As already mentioned, Bridges does good grouch, and I’ll admit I laughed a fair bit at his sarky cantankerous comments and how inconsistent his advice to his new apprentice is. Moore practically cackles with glee playing Mother Malkin, and it must have been a pleasant release after doing a string of downbeat dramas over the past few years. Playing Tom the once-and-probably-never-again Prince Caspian Ben Barnes – bless him – is still more wooden than Gregory’s glowy fighting stick.

Genuinely good are the visual effects and creature designs. Witches in this world can shape-shift into big cats, bears, or dragons to better spread death and destruction, and the action highlight of the film involves Mother Malkin’s coven descending on a defenceless town and unleashing the full might of their assorted powers, all very imaginatively realised. It’s a great set piece with a pretty solid Marco Beltrami score to drive it.  I would have liked this scene to have gone on a little longer, and also to have seen a more of what (mild spoiler) Olivia William’s witch-in-hiding could do, though. She must be able to do a bit more than some hand-waving if she was able to snatch Mother Malkin’s protective amulet.

Now and again I’m more than happy to switch off my brain and revel in the badness. Even the most inept ideas have highlights, and Seventh Son’s production design really did impress me. In terms of fantasy actioners, I’d place it firmly in the middle of the pack – it’s better than VAN HELSING (not as tone deaf), but it’s not quite up there with HANSEL & GRETEL: WITCH HUNTERS (it’s missing the darkness and depravity). If you didn’t like it, fair enough, but if you’ve been put off by the reviews so far and fancy a little undemanding fun, I’d say give it a go. SSP