Posted on September 1, 2015 by Sam Sewell-Peterson 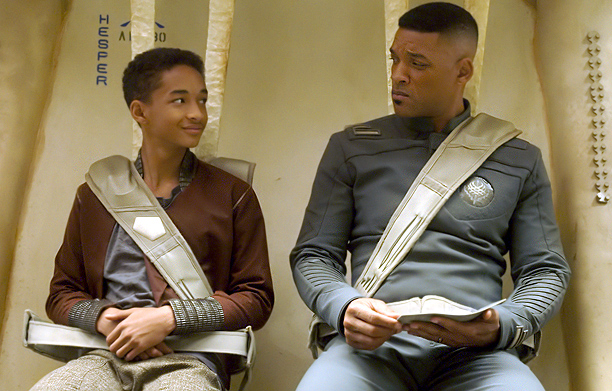 Wow. After the STAR WARS prequels and being subjected to four-and-a-half hours of Hayden Christensen, I didn’t think it was possible for another actor to make him look charismatic by comparison, by Jaden Smith manages it. In AFTER EARTH’S first scene he’s a bored-sounding exposition robot, and his performance only goes downhill from there. The same could be said for the whole film really, going as it does from dreary to worse.

In essence, the film doesn’t have a bad premise for a sci-fi actioner. Mankind has ruined the Earth (aren’t we the worst?) so we settle elsewhere but are predated on by blind fear-sensing aliens. Enter Cypher Raige (Will Smith), a fearless unstoppable action man to save us all. His son Kitai (Jaden Smith) is unable to match his father’s legacy so daddy takes him on the training exercise to end all training exercises. Things go wrong, daddy issues…be a man…they always loved each other unconditionally…yadda yadda.

Let’s pick at the plot strands a bit and see what unravels. We’re shown that the ship the Raiges are stranded in has an emergency beacon, and they appear to manage to use it to fire a distress signal back home. We’re then told they need another beacon located in the bit of spaceship that broke off when they crashed, but not why. It turns out the first beacon didn’t fire after all, but that wasn’t made in any way clear. We’re just asked to go along with it so Kitai will have something to do for the next hour. What it really that necessary to carry a thing specifically evolved to kill you on the same ship purely for training purposes? Why doesn’t Cypher get Kitai to help him with his injuries before he sends him into the wilderness so he can better assist him on his quest?

It’s likely the idea of leaving Cypher with the ship, in communication with Kitai – with him but not with him – was meant to symbolise their arm’s-length relationship. If it was, then it doesn’t really work. Kitai is a rubbish protagonist. As already mentioned, Smith the Younger imbues him with nothing to make him empathetic, or engaging, or interesting (the most notable thing he says is: “My suit’s turned black. I like it, but I think it’s something bad”). He just runs, frowns, shouts, falls over and stumbles through his journey. There are some hilariously lazy quick-fixes for plot problems, usually involving Kitai coming into contact with Earth’s wildlife and either miraculously running away in the right direction or getting a free lift as they carry him off to eat. I really hope this is actually what Jaden wants to do with his life and he’s not just doing it because he’s the son of two successful actors. He might be much better at doing something else. Smith the Elder appears to have had all his usual charm and personality surgically removed to play the glum, hilariously named Cypher. It must have been exhausting to mastermind and co-write such a narcissistic pile, that’s clearly why he’s got to sit down throughout.

The CGI could have done with another pass too. It’s not so bad to bring you completely out of the film, and the Ursa monsters look OK in a ripoff Xenomorph kind of way, but I’ve seen better computer-generated fantasy animals on the small screen. If you’re not going to push for a good script, performances, or interesting concepts, the least you can do is make your action movie look good, surely?

Their ship looks a bit like a manta ray – that’s cool I guess? The best part of the film takes place over about 20 seconds. Father and son on their transport ship, sitting side by side and looking incredibly ill at ease (see accompanying image). Kitai tries to engage his dad in conversation, telling him what he’s been reading lately before Cypher shoots him down and insists they get some shut-eye. Clumsily scripted and performed as a key scene midway through the film is, at least Cypher’s explanation for how he overcomes fear has a certain logic to it. It’s about the only thing that makes any real sense.

The most disappointing thing I found about the film, worse than Smith’s ego, worse than the plotting, characterisation, script or performances, was that it didn’t feel remotely like an M Night Shyamalan film. It could have been directed by anyone. No matter how bad Shyamalan’s films have become over the past decade, at least they were always bad in fascinating and amusing ways. They were never dull. This is just vanilla and miscalculated to the extreme like any other run-of-the-mill minor blockbuster. SSP