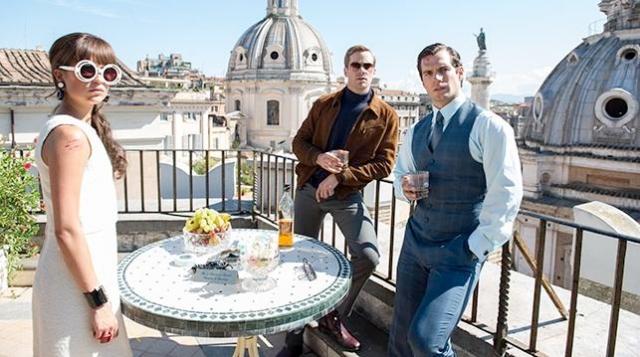 2015 has been a busy year for the spy genre. Between the anarchic KINGSMAN, the thrilling MISSION IMPOSSIBLE, and the much-hyped SPECTRE lurking round the corner,  THE MAN FROM U.N.C.L.E. had it all to prove. Guy Ritchie is in the somewhat unenviable position of bringing out his espionage effort slap-bang in the middle of the pack. He also essentially does exactly the same as he did for SHERLOCK HOLMES – namely giving this story a contemporary twist in tone but maintaining a version of the original story’s period setting. Is it successful? Mostly.

When maverick American spy Napoleon Solo (Henry Cavill) is sent on a mission in East Berlin to extract Gaby Teller (Alicia Vikander), the daughter of a prominent nuclear scientist, little does he suspect that he will soon be forced to ally himself with his Soviet equivalent Illya Kuryakin (Armie Hammer) by his superiors for the sake of world peace. Despite their vastly differing loyalties and ideologies, Solo, Kuryakin and Teller are soon on the trail of a rich and powerful group with plans to heat up the Cold War.

This kind of film lives or dies on the performances of, and the relationship between, our central protagonists. Thankfully, Cavill and Hammer are superb as Solo and Kuryakin. Cavill could easily have just played Superman in a sharper suit, but he gives Solo a wonderful 60s smoothie cadence, and seems to have fun playing a bit of a jerk as well. Hammer has recovered well from the career stumble that was THE LONE RANGER, and you can easily buy Kuryakin being the ideal Soviet soldier (I mean, just look at him) plus Hammer gives him a quiet intelligence even if he can overplay his psychological trauma. The pair bounce well off each other, and refreshingly still aren’t the best of buddies by the story’s resolution. Alicia Vikander effortlessly saves Gaby from just being the girl along for the ride. Solo and Kuryakin, being the 60s men they are, both try to make her “my woman”, but she gives her agency, attitude, and great comic timing too. I absolutely loved Gaby’s shuffling dance routine as she tries to loosen up Kuryakin in their hotel room after becoming sloshed on vodka. Hugh Grant turns up at the end as well, which is always nice.

The cabal of villains we’re presented with are far less inspiring, and a little dull and indistinct. The best of the bunch is Victoria, and Elizabeth Debicki plays her like a creepy, scheming Grace Kelly. It’s rare too that we have a female villain as tall, if not taller than our heroes, and quite a pleasing sight to see Superman have to look upwards to make eye-contact.

Not every joke lands, particularly concerning Kuryakin’s awkward cover identity, but there are some decent one-liners (Jared Harris theorises that “Inside every Kraut there’s an American trying to get out”), plus a seriously dark accidental offing of one of the baddies, and a standout scene of Solo stopping for a little pick-nick as poor old Kuryakin does all the hard work over his shoulder.

Sometimes I feel Ritchie could tone it down a bit in terms of style. LOCK, STOCK AND TWO SMOCKING BARRELS was made in its dynamic editing, but here Ritchie’s directorial quirks generally seem completely unnecessary. You can’t make a boring  searching a warehouse scene less so by throwing in a shifting split screen. Ritchie also chose rather a hard font to read in yellow for the decent portion of subtitled dialogue. Speaking of subtitles, I think this is the first movie I’ve seen where characters’ dialogue isn’t audible, but we’re still given the subtitles. This choice makes no sense, and it’s not a convention that should catch on. That said, Ritchie and DP John Mathieson compose a gorgeous shot of Solo girding himself for the latest onslaught down a darkened Berlin street, his eyes highlighted by a single, perfect diagonal shaft of light. You take the bad stylistic flourishes with the good.

Like both Ritchie’s Sherlock films, the plot for The Man from U.N.C.L.E. is OK. Just OK. It’s only fit for purpose as long as you don’t over-analyse it. Things that don’t require explanation (like what the Cold War was) are explained. Things that should be explained (like what the hell the bad guys’ end game is) are not. Also, for undercover agents, Solo and Kuryakin spend a little too much time blatantly talking about their mission out in the open for my liking.

If you liked Guy Ritchie’s Sherlock Holmes, you’ll probably like The Man from U.N.C.L.E. well enough, though I can’t testify to what extent it does the original show justice (and considering his age, and unless he’s been doing a lot of back-to-back viewing, neither can Ritchie). You might miss the well-honed wit and superlative thrills of 2015’s other spy films, but it’s got enough charm and charisma of its own to make it worth a look. SSP