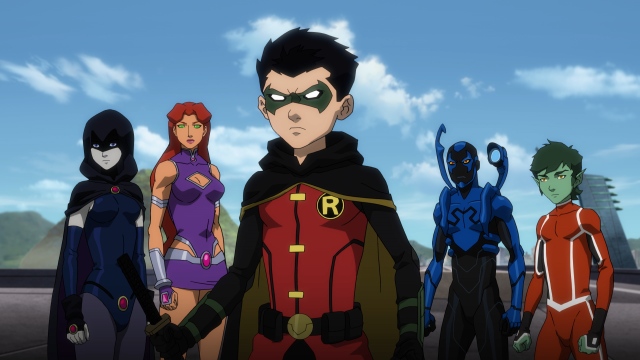 I’ve said it before and I’ll say it again: if only Warner Brothers could find a way to make their live-action superhero output as compelling as their animated straight-to-video features. If they could take a leaf out of Warner Bros Animation’s book and not outstay their welcome and maybe even occasionally crack a smile then they might not need to re-jig things to such a panicked extent to keep producing movies.

The continuing adventures of the son of Batman, Damian Wayne (Stuart Allan). After another reckless act during a mission that endangered innocent lives, Batman (Jason O’Mara) leaves his young protege with the Teen Titans with the hope that they will help him to curb his bloodlust and learn responsibility and care for others. Though he was meant to be safer amongst a team his own age, the new Robin’s interactions with the mysterious and powerful Raven (Taissa Farmiga) brings a grave new threat not just to the Titans but the wider Justice League…

There are some wonderful flights of imagination in this animation’s imagery. There really are no limits to aesthetic potential in the mind of an animator controlling a roster with superpowers . From creative super-choreography to apocalyptic scenes of destruction, there are so many striking images to choose from. I think my favourite was the sight of The Flash flying towards his airborne opponent by stepping on individual droplets of water in the air.

It’s also nice to have a sense of humour in the previously mirthless Damian Wayne films. Nightwing gets an eyeful but doesn’t do a very good job of hiding it as he chats to a just-showered Starfire over Skype; Cyborg advises that Batman really doesn’t want to know where his food goes due to his lack of a digestive system; The Flash asks if Batman has considered a boarding school for Damian then immediately cowers under The Dark Knight’s withering glare. In fact a lot of the best gags come from Batman not seeing the funny side of any situation, for as we know the Bat tends to be a bit of a killjoy, and Jason O’Mara’s wonderful deadpan is perfect to convey this.

The film explores Superman’s vulnerability to magic, a big thing in the comics but seldom covered on screen (mostly because it’s a pretty hard tonal balancing act) and this effectively takes him out of play for much of the action. This is a mistake that MAN OF STEEL and BATMAN V SUPERMAN made – avoiding the more bizarre and therefore striking comic-booky elements of the DC Universe entirely or desaturating these elements to fit in with our real world. You can get away more with more out-there characters in animation (the shape-and-size-shifting Beast Boy, alien warrior Starfire who has glowing eyes and wears a swimming costume into battle) where everything is exaggerated because of the limitations (and virtues) of the form and the very most is made of this.

What’s also nice to see is an acknowledgement that the Teen Titans are, well, teens. They have extraordinary abilities but at their heart they are a group of troubled young people living together. I understand why it’s such a popular comics line to adapt for TV as the slow character development and taking time to explore the ups and downs of being a dangerous adolescent lends itself well to the long-form (see: SMALLVILLE, BUFFY). I also think what these films have been lacking is someone for Damian to bounce off, to empathise with, but he finds that with Raven, and their developing relationship and the layers of tragedy at the heart of Raven’s story (helped a lot by Farmiga’s delicate voicework) is enthralling.

Between this and BAD BLOOD, and with THE KILLING JOKE just released, 2016 could go down as Warner Bros Animation’s most successful years. Who needs big-screen audiences when you have a loyal following watching quality adaptations of great stories at home? Animation is not a lesser medium and should not be dismissed, especially not for realising material that began as simple colours and lines on a page with colours and lines on a screen. With animation, the only limit really is your imagination. SSP

Writer and film fanatic fond of black comedies, sci-fi, animation and films about dysfunctional families.
View all posts by Sam Sewell-Peterson →
This entry was posted in Film, Film Review. Bookmark the permalink.