Posted on December 31, 2019 by Sam Sewell-Peterson

Forget what you think you know about Satanism and Satanists. With engaging voices, convincing arguments and self-aware humour HAIL SATAN? exposes the hypocrisy at the heart of the Land of the Free – freedom of religious expression…as long as you’re Christian. The Satanic Temple adopted “The Adversary” as a figurehead to be seen as an alternative to large organised religions, as welcoming to minorities and willing to debate any viewpoint. We see through the documentary how co-founder and spokesman Lucien Greaves advocates tirelessly against religious hegemony and discrimination against minority religious groups through debate, compelling evidence (often citing the American Constitution) and public stunts, notably campaigning for a statue of Baphomet to stand next to a statue of the Ten Commandments in Oklahoma. Notably it is not the Satanists who are shown to threaten to get what they want, but Christians. SSP

Posted on December 28, 2019 by Sam Sewell-Peterson 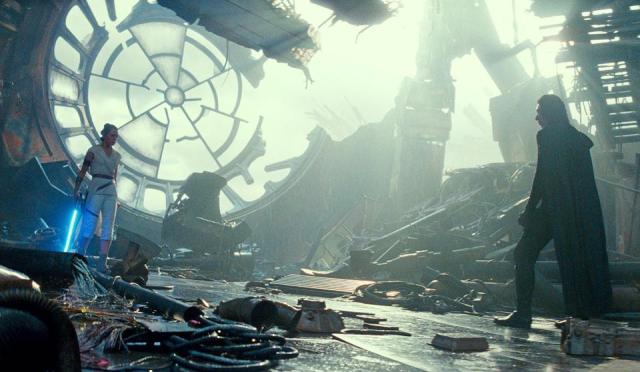 Fans, as a rule don’t really know what they want – only what they don’t. A lot of Star Wars fans didn’t want things to go the way they did in THE LAST JEDI, so JJ Abrams seems primarily concerned with course-correction in his return to the Star Wars universe.

Emperor Palpatine (Iain McDiarmid) has returned, the forces of the heroic Resistance and the evil First Order are forming up for the decisive final battle and Rey (Daisy Ridley) and Kylo Ren (Adam Driver) face their entwined destinies…

We open with Palpatine alive again, for some reason and Kylo Ren searching for him, for some reason and all the good guys doing something else, for some reason. There’s no escaping the fact that the first 45 minutes or so of THE RISE OF SKYWALKER are a bit of a mess. It feels like playing catch-up to the events another in-between film that doesn’t exist. There’s no room for characters to breathe or take stock – exposition is garbled and everyone’s zipping so quickly from one location to the next even the lightspeed computer is bewildered.

One by one all the bold and unexpected plot and character choices that Rian Johnson made are walked back – sometimes unnecessarily so – until we’re left with a somewhat cynical factory-tooled crowd-“pleaser”. Whatever your opinion on The Last Jedi, surely you can’t think reverting to the safety of repetition and recognisable tropes makes for a more interesting movie? Not everything in a story has to be connected or explained – doing so is…unnatural.

The cast are trying their best with sub-par material, with Ridley and Driver committing admirably to a script that tanks their previous character development. Elsewhere, Oscar Isaac as the wonderfully flippant Poe Dameron remains a highlight along with a returning Billy Dee Williams as Lando, and even Anthony Daniels somehow manages to be nuanced as C3-PO. McDiarmid clearly still relishes being the ultimate evil-just-because bastard and owns his every scene, no matter how hokey they make the resurrected Emperor’s dark powers.

Leia’s presence aside, Abrams tries to pull on his audience’s heartstrings with (no spoilers here) maybe three big things that happen in the story, two of which are undone by the end. There are still very few lasting consequences in Abrams’ storytelling. There are callbacks aplenty, some of which work, which really connect, and others which are more laboured and feel more like pandering.

What never feels laboured or pandering is John Williams’ always-superb orchestration. He knocks it out of the park for a ninth time, composing new and distinctive themes for characters and key moments and dipping into his previous Wars scores to heighten plot and character echoes.

It’s a gorgeous-looking film beyond doubt, with Force abilities rendered on a scale never seen before, action taking place a wide range of colourful intergalactic environments, endearingly low-fi practical creature effects and more spaceships than your brain can comprehend. Unfortunately, if you’d be unable to count the number of spaceships on screen if you paused the movie, you probably have too many spaceships on screen to actually mean anything.

Not everything is ditched wholesale, in fact Abrams builds interestingly on TLJ’s “force bridging” concept from the off, and he still loves playing with what you can and can’t (but mostly the former because it’s s space fantasy so who cares) do with lightspeed travel. If only more in this was new and interesting and less concerned with overanalysis.

Has it really been 42 years of adventures in this galaxy? We’ve has highs lows, and in-betweens, but the Star Wars movies have always been memorable and made a profound connection with their fanbase. The Rise of Skywalker is aiming to please, but all-too-often gets carried away with itself. Fanservice and clear affection for what has come before is one thing, I just wish they made more of an effort to do something completely new rather than retreading past glories and “righting” perceived wrongs. Flaws often add colour to film, and the presentation of this is too flawless, too precision-engineered to mean anything much. I’m not mad, I’m just disappointed. SSP

Posted on December 27, 2019 by Sam Sewell-Peterson

Posted on December 26, 2019 by Sam Sewell-Peterson

Posted on December 23, 2019 by Sam Sewell-Peterson

Posted on December 23, 2019 by Sam Sewell-Peterson

BOOKSMART is the funniest film of the year, no contest. The sheer rate at which the gags arrive will shatter your defences, the breezy energy and easy charm of the leads will win you over. It’s great, and staggeringly rare to see teenage female characters talking and behaving like the same actually do without judgement. It’s a huge-hearted tale of friendship for the ages and a dual star-making turn for Kaitlyn Dever and Beanie Feldstein, with Diana Silvers and Billie Lourd providing strong support. As a fellow introvert who still struggles to get myself out there, Amy and Molly’s regret at missing out and frantic quest to make up for lost time really spoke to me. It might go a little overboard in the final stretch, but not enough to ruin all the good stuff. You’ll never look at a stuffed panda the same way again. Olivia Wilde’s directorial career will be one to watch. SSP

Posted on December 12, 2019 by Sam Sewell-Peterson

What an achingly beautiful, melancholy animation about memory and mistakes this is. I LOST MY BODY has more honesty and imagination and wit than most films of 2019, and it does it all in about 80 minutes. We get a very AMÉLIE-esque slightly creepy meet-cute paired with a far more surreal companion story of a severed hand making its way across a city in search of its owner. Few stories have the idea of memories in relation to touch as the primary sense, but this is essential when your secondary protagonist is a hand. How the stories ultimately converge and what connects them isn’t obtuse but you do have to be taking it all in, and the journey to get there is an enthralling joy. SSP

Posted on December 12, 2019 by Sam Sewell-Peterson

With DOLEMITE IS MY NAME, Eddie Murphy gets his mojo back. In this colourful biopic, we see that Rudy Ray Moore (Murphy) was born in the wrong era for his style of performance: “Vaudeville is dead. I don’t need an all-in-one”. So he listened to stories from local characters (“I ain’t no hobo – I’m a repository of Afro-American folklore!”) and used them to inspire a whole new personality. Moore was a roaring underground success among his limited passionate fanbase, but he was an African-American performer who wanted to break into movies but who unfortunately wasn’t young or good-looking enough for Blaxploitation. Why would you see a movie with “No titties, no funny and no Kung-fu”? Dolemite’s unexpected smash movie debut had all three. “You’re not supposed to make a movie for the five square blocks of people you know”. But he did, and he’s affectionately remembered for it. SSP

Posted on December 3, 2019 by Sam Sewell-Peterson

Posted on December 3, 2019 by Sam Sewell-Peterson

Conceptually, theoretically, THE GREAT HACK is essential viewing for everyone who uses social media. The big question presented at the top is “How did the dream of a connected world tear us apart?”. I found it very irritating that they decided to subtitle a number of voices speaking perfectly clear English but without an American accent – it’s pretty obnoxious and doesn’t do wonders for the argument landing anywhere outside the US. The debate primarily focuses on Trump and Brexit so straight away you’re working to alienate half of your target audience. You also get some rather old-fashioned and overbearing graphics that end up detracting from the argument. Cambridge Analytica seen as a “full service propaganda machine” is simply terrifying, even more so because relatively few people realised it before the press coverage. “We invented the way social media is used to communicate with voters”. You won’t regret giving your time to The Great Hack; your eyes will be opened, but it could all have been delivered more elegantly.