Posted on January 3, 2020 by Sam Sewell-Peterson 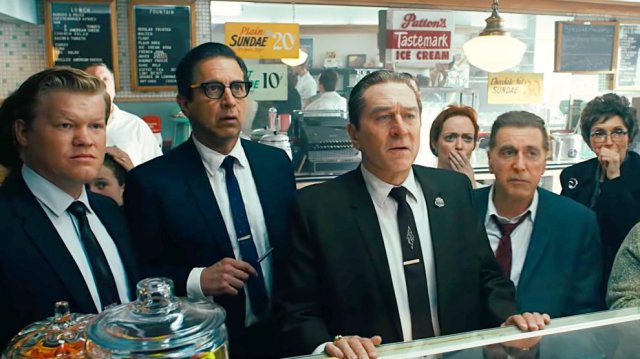 THE IRISHMAN has two of the saddest tracking shots in cinema history; one at the beginning and one at the end, both set in a retirement home and both filled with regret. That’s the prevailing emotion in all of this – regret – but you don’t regret Martin Scorsese staying firmly within his wheelhouse.

The story of Frank “The Irishman” Sheeran, who went from a nobody returning from WWII to “painting houses” for the mob when he is taken under the wing of boss Russell Bufalino (Joe Pesci). Eventually Sheeran is also acting as bodyguard for powerful Teamsters Union Supremo Jimmy Hoffa (Al Pacino), but will this relationship survive Hoffa’s crossing of the gangsters who helped him secure his position?

I’m not an American history buff, I know especially little about this period of the late 50s to mid 70s, so there are true-life happenings here that I’m sure with have more impact on some audience members than they did on me. For all the ambitious decade-spanning, operatic crime melolodrama moments, The Irishman is a film made in the lower-key, mundane breaks from the all the point-blank headshots. Never mind who’s been extorted, whacked or tailored for political office, these are guys who will argue endlessly about timekeeping, etiquette and why you really shouldn’t transport fresh fish on the backseat of your nice car.

The film gifts us with one of the most sinister low-key threat in the Scorsese oeuvre: “It is what it is”. Basically, this is the situation, this is what’s going to be done, and there’s nothing you can do about it. Woe betide anybody who doesn’t take heed of this…

The lead trio are the best they’ve been in a very long time. DeNiro and Pesci have to do a certain amount of underplaying, but Pacino is a crackling live wire. There’s plenty of entertaining back-and forth between the key players and another great Scorsese food scene, this time with Pesci filing the simple act of dressing a salad with menace. You also get reliable supporting players like Ray Romano, Jesse Plemons and Stephen Graham being reliable and Anna Paquin making up for a lack of lines with a powerful look that says a thousand words to DeNiro as her neglectful dad.

Scorsese is aware that your age shows in areas other than your face, right? Not so much a problem for the remarkably sprightly 79 year-old Pacino, but DeNiro’s body language doesn’t change in any noticeable way when he’s playing his own age and when he’s playing half his age, which is a problem when he’s the character in the most scenes and whose story pings back and forward in time so frequently. There’s no reason they couldn’t have found younger lookalike actors or used physical doubles for the flashbacks, but no, they just had to show off their new toys. The blue (contact lens? CG-altered) eyes of Frank are also really distracting.

The Irishman is a long sit, but with so much ground to cover, so many characters and plot turns to serve, you rarely feel the time drag. The advantage of being primarily seen on Netflix of course is that you can take you time, have breaks, let it all soak in. It might have worked better as a miniseries, but Scorsese is as we know committed to the concept of “cinema” and would probably see taking that route as cheapening his baby.

The Irishman sees Scorsese comfortably in his wheelhouse but rarely resting on his laurels. He still grows as a filmmaker after 50 years in the profession, refining, reflecting and bringing nuance to each new project. This isn’t quite up there with his very best, but it comes pretty darn close. They still should have kept the title as “I Heard You Paint Houses”, though. SSP

I'm not paid to write about film - I do it because I love it. Favourite filmmakers include Bong Joon-ho, Danny Boyle, the Coen Brothers, Nicolas Winding Refn, Clio Barnard, Steven Spielberg, Guillermo del Toro, Paul Verhoeven, Taika Waititi and Edgar Wright. All reviews and articles are original works written and owned by me. They represent one man's opinion, and I'm more than happy to engage in civilised debate if you disagree.
View all posts by Sam Sewell-Peterson →
This entry was posted in Film, Film Review and tagged Al Pacino, Anna Paquin, Jesse Plemons, Joe Pesci, Martin Scorsese, Netflix, Ray Romano, Robert DeNiro, Stephen Graham, The Irishman. Bookmark the permalink.