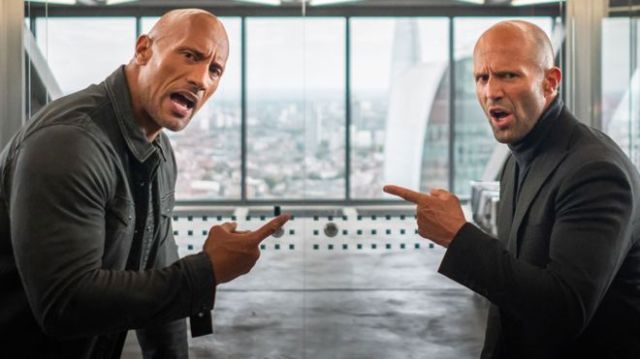 DSS Agent/human tank Luke Hobbs (Dwayne Johnson) and former baddie mercenary-turned-less-bad mercenary Deckard Shaw (Jason Statham) reluctantly team up to secure a deadly engineered virus carried in the blood of Shaw’s estranged sister Hattie (Vanessa Kirby). But unstoppable cyborg fanatic Brixton (Idris Elba) is on their tail, an opponent who may be too much of an obstacle even for all three of them, if they ever get along.

Johnson and Statham are a pleasing bickering double-act and both are given memorable reintroductions (Shaw destroys a room full of henchmen with a surprisingly durable champagne bottle and Hobbs does the same to a similar bunch of bad guys with his fists and head). They then trade insults and emasculating put-downs throughout, some of which really push the film’s age classification. David Leitch of DEADPOOL 2 is directing so it isn’t a surprise when the gags fall in the same ballpark (“ball” being the optimum word).

Vanessa Kirby steals the show from the titular heroes without breaking a sweat. As Hattie Shaw she’s easily the most layered character (in that she has some) in the film not to mention proving herself particularly deadly an opponent to anyone standing in her way (the noises some people made in the cinema when you see how much damage she can do just with a fold-up chair…).

There’s no reason for this to be 2 hours+. It’s an A-B chase movie but it chooses to take a really circuitous route to get there. If it had just received a bit of a trim, made more streamlined and pacey it might have been more enjoyable overall. The final act in Hobbs’s homeland of Samoa would have also had much more of an impact if we hadn’t been shown the whole thing in trailers.

The most hilarious thing in the film, intentionally funny or not, is bulletproof super-soldier Idris Elba always putting his motorbike helmet on before a chase scene. I know it would have made the stunt work much simpler to film if you’re not worrying about using doubles, but the amount of times Brixton and his sci-if bike is clearly CGI, you might as well have reinforced his fearless nature.

The CG compositing in general could have used another pass – the stunt work is good, as are individual stunts and effects, but when it goes from one to another it’s jarring on the eyeballs, especially when Idris Elba seems to become a rubbery Mr Fantastic to get his bike around sharp corners. The much-ballyhooed train of off-road vehicles chained to a helicopter going over a cliff must’ve had some practical basis but I really can’t tell where the the effects work takes over from the tactile, so that’s something I suppose.

Hobbs & Shaw is mostly harmless fun that refuses to subscribe to logic or put a check on its stars’ egos or on-screen personas. You probably saw that story the other week about how Johnson and Statham (among other F&F stars who now have producer roles) have an iron grip over how their characters are allowed to appear in this franchise, which makes everything less organic but not any less fun. Just sit back, get comfortable and let the stupid come to you. SSP