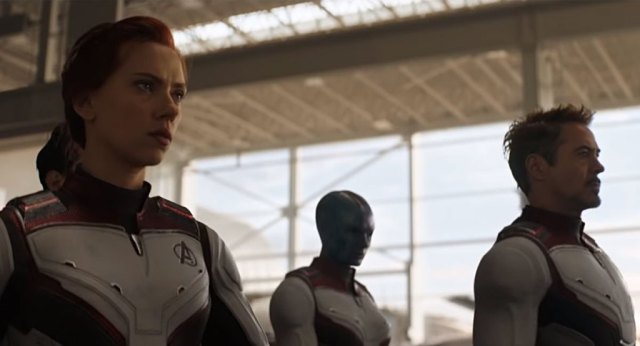 Time of their lives: Marvel/Disney

Alright, are we all caught up? OK then. Endgame is one of those particularly difficult movies to wax lyrical about (and I intend to) without talking about the specific things you loved. My spoiler-free review still holds true, but I’d dearly like to get a bit more in-depth. So let’s crack on.

That opening gut-punch is a statement of intent. No fanfare, no ceremony or recap. Just a guy on a farm with his family one moment, then he turns and they’re gone leaving only an eerie silence. That guy is of course Hawkeye (Jeremy Renner, teeming with pain throughout) and he just died by living when his wife and children didn’t.

Grief affects one person very differently to the next, as demonstrated by the surviving Avengers and their various coping mechanisms. Steve tries to stay positive and help others through the bad times, Natasha overworks herself for the smallest of gains, Tony puts all his energy into starting a family. I thought that they maybe dragged out the fat, wasted Thor gag a little too long, but the highly vulnerable state he finds himself in during his stage of their do-or-die mission results in a particularly tender moment of connection with his mother Frigga (Rene Russo, making me wish she wasn’t screwed over by the THOR movies). It also results in a rare moment of level-headedness and emotional maturity from Rocket (Bradley Cooper, nuanced) when Thor suggests saving Frigga from her imminent demise: “I get that you miss your mom. But she’s gone – really gone. And there are plenty of people who are only kinda gone. And you can help them”.

“I knew it!”. Despite the fact that I rewatched AGE OF ULTRON the night before I saw Endgame and this is 100% set up , I did not expect them to go here. But what a glorious, inspiring moment it is when, just as our heroes need him the most, Captain America catches Mjolnir and goes to town on Thanos. This is the moment of the movie for me, and I’ve yet to see it not prompt a gasp from an audience.

I think most fans suspected time travel would be involved in putting things right. The “time heist” is a great excuse for a trip down memory lane and that conceit of characters ducking in and out in the background of previous adventures is endlessly entertaining, especially when admiring past selves’ posteriors.

That tracking shot at the finale paired with Alan Silvestri’s (the unsung hero of the Avengers movies) soaring score has got me all three times I’ve watched this movie. How the camera gracefully pendulums in and out of the rows of mourners and how everyone (even kid sidekick Harley from IRON MAN 3 *starts crying again*) is there for Tony and for each other in this moment.

They bring Tony and Steve’s stories full-circle in two distinct and differently beautiful ways. Tony finally got himself a real life in the dark times after The Snap before donning the armour one last time to make sure they had a world to live in. Steve survived but felt like he’d never really lived what with the whole 70 years on ice thing so when the opportunity came to go back and experience decades of normality he took it. After being instrumental in saving everyone he finally gets his happily ever after, finally puts himself first.

Side bar – after all the timey-wimey shenanigans, are there multiple versions of these characters running around now in some of these universes? Is that how the Disney+ series are going to work?

Natasha’s final scene which should be heartbreaking has a weird semi-comic scuffle and she and Clint drop, shock and explode each other in an effort to be the first one to die. It was nice that their true feelings for each other were finally acknowledged but the scene lacked much needed pathos because of the tonal wonkiness.

I can’t see a world where Avengers: Endgame doesn’t end up being very high up my year end list. It not only surpassed but smashed my expectations, drawing to a close a decade of the most ambitious interconnected filmmaking and delivering surprises, spectacle and indelible images throughout. It’s a film so tightly packed with goodness you’ll pick up on some new subtlety amongst the big stuff each time. Seeing every single Avenger and their army of allies forming up behind Captain America as he faces down an alien horde alone is a hugely satisfying moment. Arguably just as impactful are moments like an increasingly human ex-baddy Nebula (Karen Gillan, dark horse MVP) tenderly sitting an unconscious Tony up and covering him with his jacket as they drift, hopelessly through space. It’s the little things on a big canvass that make it. SSP