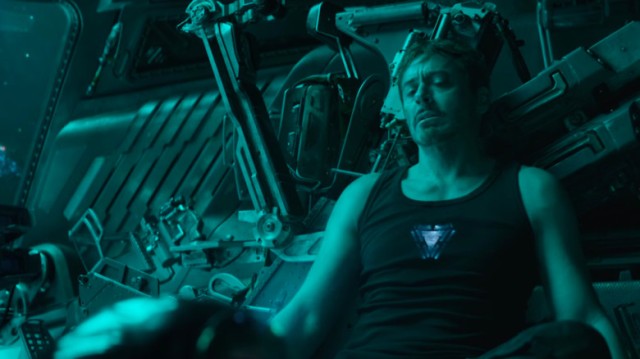 Eleven years ago the Marvel Cinematic Universe was born when Nick Fury turned up at Tony Stark’s house to talk to him about the Avengers Initiative. It’s been a long road to this point, but much like the three-hour AVENGERS: ENDGAME it’s passed in the blink of an eye.

If there’s a single criticism I’ll give the MCU thus far, it’s that you’re seldom given chance to take stock. The Avengers are always keen to avoid collateral damage, but when they make terrible, damaging mistakes like in AGE OF ULTRON or CIVIL WAR they dust themselves off and move on. Endgame’s extended runtime allows the luxury of a whole first act of registering what Thanos did, what his victory and universal genocide meant for the surviving 50%. Cap now runs a counselling group, Hawkeye goes on a vigilante rampage and Thor becomes a pathetic recluse. Those who were not deleted from existence are the victims more than those who were, because they have to live with it.

Downey has rarely been better than he is here, bringing the raw edge of some of his indie performances to a broken and angry Tony, not to mention finally growing up and living a little outside the Iron Man armour. In MVP contention are Evans who brings a rare note of vulnerability to Cap’s previously infallible persona and Rudd who gets all the funniest one-liners plus getting to have the most human reaction to the cataclysm.

Fear not, the film is by no means a downer. In fact, once the remaining Avengers band together and work out what they need to do to save the world, it becomes deliriously fun. The gag-rate is just as high as in any other Avengers outing and mounting action on this scale and so flawlessly quite frankly makes earlier MCU movies look a bit amateur. Never before have we seen such a perfect recreation of the central splash page of an event comic as in Endgame’s climactic, titanic battle.

It’s almost impossible to talk about how completely the extraordinary team of the Russo Brothers and their writers Christopher Marcus and Stephen McFeely stick this landing without talking about what actually happens in the film, but I also accept its opening weekend and plenty of people want to go in cold, so I’ll hold off on my detailed analysis for later. Suffice to say our journey takes us to some familiar places and everyone gets their moment, whether in a single shot or an extended action sequence, to do something cool.

Some characters admittedly go on more compelling journeys than others and some players are sidelined even in a film where your principal cast has halved compared to the preceding film. I also didn’t think every joke hit its mark, some are mis-timed to undermine a moment of pathos and others (particularly relating to one key character) just drag on for too long.

I don’t think I can recall another movie that’s so unashamedly fan-service-y and yet doesn’t feel the least bit manipulative. The MCU, and we their audience have earned these final bows and air-punching payoffs to setup from movies ago. Even the cameos are rather well-judged and service, rather than distract from, the larger story.

Avengers: Endgame is without doubt Marvel’s magnum opus, their crowning achievement, the opportunity for every fan to say goodbye. This is the definitive conclusion for some of our heroes, but only the beginning for others. See Endgame in a packed house of Marvel fans and the gasps of awe, the giggles of appreciation and the throaty sobs of hearts breaking will complete the intended experience of an already quite stunning superhero finale. SSP