Posted on February 10, 2018 by Sam Sewell-Peterson 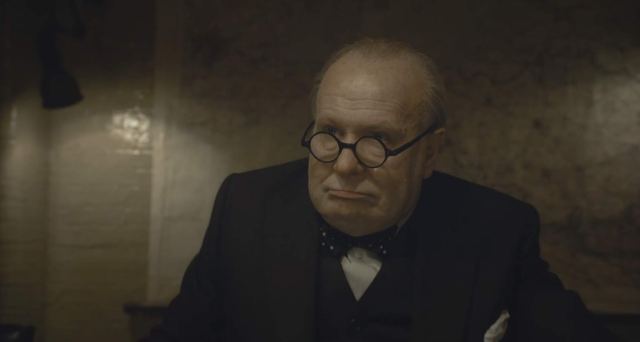 DARKEST HOUR left me cold. Yes, Gary Oldman will probably win the Oscar for portraying Winston Churchill. Yes, he probably should. And yet, something about the presentation of the film around him left me feeling pretty empty and disconnected.

May 1940, political outcast and fine orator Winston Churchill (Gary Oldman) takes over the mantle of Prime Minister of Great Britain from the ailing Neville Chamberlain (Ronald Pickup). Over the initial months of his premiership, he faces political infighting, a lack of faith from his monarch George VI (Ben Mendelsohn) and the potentially harrowing loss of hundreds of thousands of soldiers stranded and surrounded in Dunkirk…

Churchill was a big personality to say the least. With Oldman’s performance and seamless prosthetics being so big, isn’t it pretty redundant, even reductive, to have big stylistic flourishes throughout the film as well? Here’s a good drinking game: take a swig every time there’s a dramatically imposing crane shot or desaturation and high-contrast film noirish lighting in the same scene, it won’t take long to get as sozzled as the man with the ever-present cigar. Revealing Churchill for the first time in total darkness with the strike of a match from his bed was a stroke of genuis, but elsewhere you just want director Joe Wright to tone it down a bit and let the story and the man speak for themselves.

The best scenes are not the speeches or the war room strategising (AKA the money shots for the awards reels), they are the simple exchanges between Churchill and King George (a refreshingly dialed-back Mendelsohn is the next-best thing in this) the two most powerful men in the country trying to work each other out and if not agree, then not entirely disagree. Their first meeting is made awkward by Churchill requesting they reschedule their weekly meetings to fit around his nap time, in subsequent scenes the King and the PM’s relationship is made sourer by Winston’s increasingly erratic behaviour until his monarch seems to take pity on him when he at his lowest ebb.

Darkest Hour has a fair bit of crossover with THE CROWN, and it’s not just because Pip Torrens is in both. Though this story takes place nearly a decade before Elizabeth II ascended the throne and Churchill won his second premiership, a lot of the same figures are involved in the key events. John Lithgow plays a more tragic and frail Churchill in the Netflix series, but you can understand the appeal of focussing on the man at the height of his powers for the big screen.

I think Wright was going for something akin to Spielberg’s LINCOLN, something grand but focussed, something to throw light on political plotting behind the seminal moments in a dark era of history. Despite the force of Oldman’s performance, you never really get into what is making Churchill tick, even less so the motivations of his conniving political opponents. Though it was completely made up, I thought the scene where Churchill rides the Underground and speaks to ordinary Londoners did its job rather well, unlike other scenes designed to show his humanity which fall a bit flat. Let’s not even get started on the real Churchill’s darker side, his prejudices and unfeeling acts made throughout his career, all deftly skipped over for the film. The worst we hear about the old dog here is that he was mean to his secretary (Lily James) after too many morning brandies.

You already know this story (especially if you’re British, doubly so if you saw DUNKIRK a few months back), and you’re not going to learn anything new about this wartime icon from Darkest Hour. It stops just short of being a hagiography, but over-styling and characters frequently standing around explaining the plot might sink Joe Wright’s latest were it not for the man in the jowls. SSP