Posted on August 6, 2017 by Sam Sewell-Peterson 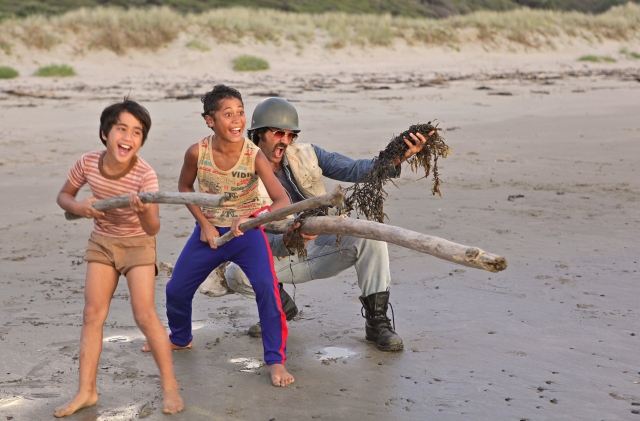 Handled delicately, grief makes for a great film. Boiling Taika Waititi’s films down to their core themes, if EAGLE VS. SHARK was about battling depression and HUNT FOR THE WILDERPEOPLE was about finding a place to truly belong, then BOY is certainly about coping with grief.

Boy (James Rolleston) seems perfectly happy with his rural life making his own entertainment, keeping an eye on his younger brother and idolising Michael Jackson. That all changes on the day when his tearaway dad Alamein (Taika Waititi) turns up on his doorstep asking to be part of his life again. But are Alamein’s intentions pure? Judging by his reputation it seems unlikely.

Boy seems to be Taika Waititi’s most personal film to date. You have to think he drew from his own life experience, a Maori cultural perspective of growing up in a small town in New Zealand in the 1980s. What a stoke of luck to have found James Rollerston to play such a winning lead after he only fell into the role early in production. As Boy, he radiates likeability as speaks direct to camera on his unique world view and uniquely New Zealand turn of phrase. He also radiates raw pain in a manner of an actor beyond his years as Boy’s world slowly crumbles around him. Waititi casting himself as Boy’s mostly absent dad might be considered narcissistic if the writer-director wasn’t prepared to play Alamein as such a disappointment. You completely buy that this old punk would appear to be the coolest guy around to his impressionable young sons, but when you get past the posturing, the bargain basement wisdom and the natural charisma, there really isn’t a whole lot to him but his selfish drive and using his family as a means to an end.

Waititi is never afraid to acknowledge that a lot of our time on Earth is a pretty miserable experience. All we can really do is treasure the few bright spots and hope for the best. Boy’s hero worship of his absent dad is a coping mechanism, along with his obsession with Michael Jackson and playing war on the beach. While much of his life is fun and games, endless daydreaming and long summers, he also has to act as a very real guardian to his younger brother. Boy is both younger and more grown up than his years.

The final flourish of the film shouldn’t really be ruined, but I’m too excited about it not to. Just skip ahead a paragraph if you want to go into this quirky curiosity completely cold. So, basically, after all the plot threads are resolved and the character arcs reach their natural conclusion, the whole cast break into doing the “Thriller” dance crossed with a Hakka. It almost goes without saying that this is an out-of-leftfield stroke of genius, but the film is playful with its presentation throughout with film spoofs and animation all springing from Boy’s mind over-compensating for his continual disappointment.

Taika Waititi is easily up there with my favourite directors of all time. His work is playful and extremely funny but not in the least bit maudlin. With Boy, Waititi wears his heart on his sleeve and highlights a seldom explored cultural perspective to make his most mature and profound film to date. With his imagination and his mastery of balancing a variety of tones, I can’t wait to see what he does with THOR: RAGNAROK later this year. SSP