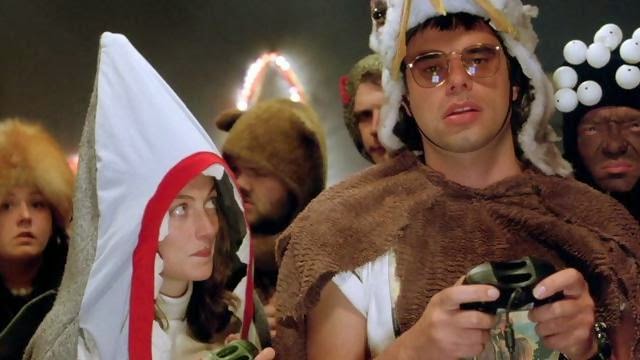 You can always spot a Taika Waititi project, and EAGLE VS SHARK is unmistakably that. He’s got a unique comic voice and an appealing sideways view of the more painful and complex aspects of our world. Just look at how he juxtaposes a mortifying death with an awkwardly hilarious funeral scene straight after in HUNT FOR THE WILDERPEOPLE, or how characters grapple for meaning and understanding in this, his feature debut. He also likes silly songs, which is very endearing in a filmmaker.

Lily (Loren Taylor) is lonely and unfulfilled, until she gets to know fellow misfit Jarrod (Jemaine Clement) at a costume party. An odd romance blossoms and Lily travels with Jarrod back home so he can confront his arch-enemy.

“Life is full of hard bits, but between all the hard bits are some lovely bits” as mused by Lily may be one of the most simply profound meditations on our short time on Earth I’ve ever heard. Taylor co-wrote the story with Waititi and this quote is typical of the low-key wit of the script at large (another highlight is Jarrod’s botched attempt at a threatening phone call, “Tell him justice is waiting for him” / “OK Justin, I’ll tell him”.

If NAPOLEON DYNAMITE explored crippling battles with depression and played violent video games instead of drawing ligers, it would probably turn out something like this. A hugely dysfunctional family, colourful locals and a protective, small-town mentality towards unusual behaviour (especially if said unusual behaviour happens to belong to a member of your family).

I like that the film doesn’t make excuses for Jarrod’s behaviour. He comes across as a tool, just as he should. He’s a tool with depression, and we should feel sympathy for him, but we should also feel for the misery he puts his family and Lily through. Anyone who’s been through similar experiences with a family member or friend will likely find their heartstrings plucked most painfully by seeing how Jarrod’s dad (Brian Sergent) closes himself off to his family and the world at large following an immense loss, but equally you’ll feel for Jarrod unable to confront his issues healthily or prove himself in his father’s eyes.

There’s an absolute killer of a scene towards the end that sums up what has gone wrong with Jarrod’s fractured family, when Lily asks Jarrod’s dad to answer what should be a very easy question about his son. Animals are key to the story, and at the same time not relevant at all. Our cute-peculiar pair get to know each other at an “animal party” and identify with and feel a connection to creatures they feel a bond with, and misidentifying with an animal, or having someone else misjudge your character causes much pain and upset. Stop-motion animation is also used sparingly, but to moving effect in realising a symbolic companion piece. Who’d have thought mouldy apples could be affecting?

Eagle vs Shark is a pleasantly surprising and sometimes profound dramedy packed with Waititi’s trademark quirks. It’s a small story without spectacle, but also an intimate one which refuses to simplify mental illness and its impact on friends and family. This could have been a downer, but Waititi and Taylor have a light touch and help to make this a quirky highlight of last decade. SSP

I'm not paid to write about film - I do it because I love it. Favourite filmmakers include Bong Joon-ho, Danny Boyle, the Coen Brothers, Nicolas Winding Refn, Clio Barnard, Steven Spielberg, Guillermo del Toro, Paul Verhoeven, Taika Waititi and Edgar Wright. All reviews and articles are original works written and owned by me. They represent one man's opinion, and I'm more than happy to engage in civilised debate if you disagree.
View all posts by Sam Sewell-Peterson →
This entry was posted in Film, Film Review and tagged Black Comedy, Brian Sergent, Comedy, Drama, Eagle vs Shark, Hunt for the Wilderpeople, Jemaine Clement, Loren Taylor, Napoleon Dynamite, Taika Waititi. Bookmark the permalink.