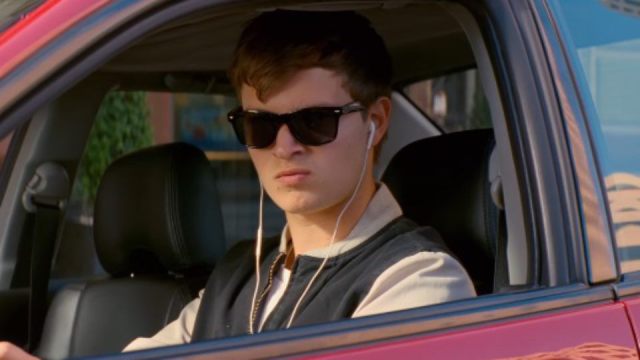 What do you mean, you don’t like my playlist?: Working Title Films/Big Talk Productions

BABY DRIVER isn’t just Edgar Wright’s long-awaited return to work after being stung by a big studio. Wright’s first American film also represents his coming of age as a filmmaker. Maturity on film isn’t just about going darker or toning down your stylistic flourishes (he did both these things with THE WORLD’S END to unsatisfactory results), it’s about going deeper into character and theme and refining everything that has come before. The thing about sitting on a project for 20 years is that you’ve had plenty of time to rehearse every beat and make sure it hits.

Baby (Ansel Elgort) has a gift: as long as he has the right track playing in his damaged ears, he can make a car do anything. This talent is exploited by criminal mastermind “Doc” (Kevin Spacey) on a series of dangerous heists, and Baby goes along with it with the assurance that soon his debt will be paid. But when that day comes and Doc goes back on his word, Baby has a choice to make, a choice that may put his loved ones in harm’s way.

Not since the first GUARDIANS OF THE GALAXY has a soundtrack been used so effectively to drive story and character. I think this is what most people wanted SUICIDE SQUAD to be from that first “Bohemian Rhapsody” trailer: dynamic action progressing, building, lulling, and building all over again in time to a stonking music selection. It’s not just track selection for the sake of it, the shape and structure of the whole story is inseparable from the music. The musical highlight for me is definitely a chaotic second act shootout into a foot chase set to the appropriately mad and lengthy “Hocus Pocus” by Focus.

The opening bank robbery getaway is an action masterclass, a pulse-quickening rush where you see Baby does almost supernatural things with his car. The execution of these elaborate sequences is faultless, the stunt work eye-popping, but what makes them really sing is Wright’s peppering of sight gags in and amongst it all. This might not be broadly speaking a comedy like his other work, but the humour and lightness of touch is still there if you’re looking for it. From song lyrics appearing on wall to characters bickering on the job and even a swift reprise of “er…the first one” from SPACED, Wright provides plenty of fuel for mirth.

It’s all Baby’s-eye-view, a (relatively) innocent outlook on crime. We generally find ourselves staying in the car with him as the heist happens offscreen. The debate about how far just being an accessory to crime can go is front-and-centre and our hero (mostly) refuses to cross that line. This is a real star-making turn from Elgort, and you’ll fall in love with Baby from the very first scene as he does a car seat bop along to “Bellbottoms” as his gang does crime over the road. If we weren’t invested in Baby’s story and that of his significant others – new flame Debora (Lily James) and foster dad Joseph (CJ Jones) – the film couldn’t work no matter what spectacle was on offer. We really want them to get through all this OK, highly unlikely as it is they will all be unscathed. Elsewhere supporting players can be a little thinly sketched, though Spacey’s condescending put-downs are fun (pointing out to Jamie Foxx’s Bats that it wouldn’t take a murder victim long to spell out his name on a ouija board) and John Hamm threatens to steal the show wholesale in the film’s final stretch as “Buddy”, the friendly face of psychopathy.

Baby Driver will likely end up being the feelgood film of the year and with such pleasing energy and boundless creativity on display I reckon it’s going to be a keeper. A moral gangster fairy tale about doing the right thing, or doing the wrong thing for the right reasons, it’s satisfying to see in Baby a lead character with an uncomplicated view of the complicated world he finds himself part of. Edgar Wright’s return was well worth the wait, and its great to see such a talented filmmaker not only get his groove back, but evolve as well. SSP

I'm not paid to write about film - I do it because I love it. Favourite filmmakers include Bong Joon-ho, Danny Boyle, the Coen Brothers, Nicolas Winding Refn, Clio Barnard, Steven Spielberg, Guillermo del Toro, Paul Verhoeven, Taika Waititi and Edgar Wright. All reviews and articles are original works written and owned by me. They represent one man's opinion, and I'm more than happy to engage in civilised debate if you disagree.
View all posts by Sam Sewell-Peterson →
This entry was posted in Film, Film Review and tagged Ansel Elgort, Baby Driver, CJ Jones, Edgar Wright, Focus, Guardians of the Galaxy, Jamie Foxx, John Hamm, Kevin Spacey, Lily James, Spaced, Suicide Squad, The World's End, Thriller. Bookmark the permalink.