Another day and still a load of original content produced for streaming on Netflix. As ever it’s a varied(ish) bunch and I’d sooner recommend some efforts than others.

I AM THE PRETTY THING THAT LIVES IN THE HOUSE (2016) Yes, it’s another haunted house story where a rich invalid still lives inexplicably alone in a ridiculously creepy house. It’s Gothic central. It’s not at all original plot-wise, but the same can’t be said for the way this story is told or for its unique aesthetic.

Director Oz Perkins and DP Julie Kirkwood do some really interesting things with lighting and focus to build the creepy atmosphere. At times your eyes are made to strain, the camera refocuses as your own vision does…then you see something. Or you think you did. The story is a real slow-burner, but the payoff is unnerving and Ruth Wilson’s performance keeps the whole thing together.

The narration might be a bit overwrought, the framing devices (probably intentionally) confusing, and what did and didn’t really happen is left very ambiguous, which might not be to every viewer’s taste (I don’t really mind). The film starts off trying to say something profound about ghosts, pretty much the same that was said with THE DEVIL’S BACKBONE, and though it never quite reaches that height, it marks out Perkins as a talent with a distinctive style to watch for in future.

Pitching to the phantoms: Netflix

SPECTRAL (2016) This is the kind of film that has soldiers shooting at a ghost, and when that doesn’t work and their bullets pass straight through their target, they switch to heavier ammunition. Of course, when they work out the ghosts are allergic to iron, they conveniently end up in an iron foundry for a HOME ALONE tooling-up montage.

It so wants to be a supernatural version of ALIENS, even down to including a Newt-alike, but the characters just aren’t there. There’s no memorable dialogue or any meaningful moments among the grey action. Also, the poster made it look like James Badge Dale had a laser sword, which he doesn’t (it’s actually a camera that sees in a different spectrum) so I felt a bit cheated.

As shonky as SPECTRAL is for the most part, I’ve got to give Dale props for throwing in “If I reverse the polarity” in his tech babble speech and managing to keep a straight face. In fact, he’s such a consistently reliable actor he almost sells the whole silly concept. This might have made a cool video game, or even a passably entertaining TV series with more time for characters and world-building, but it doesn’t make a one-off movie that’s anything more than drab and unaffecting. 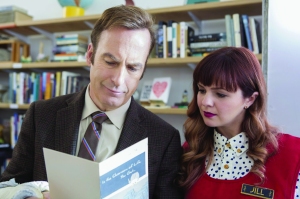 The only face for card shopping: Netflix

GIRLFRIEND’S DAY (2017) Here’s an idea for BETTER CALL SAUL fans: let’s whet their appetite for Season 3 with something nowhere near as good that still stars Bob Odenkirk. Let’s give them something that thinks it’s THE BIG LEBOWSKI but is probably closer to the Coens’ LADYKILLERS remake. This has nothing to do with the Coens, but it’s clearly what they were shooting for with deadpan black comedy and every supporting character being needlessly quirky.

Sadly, Odenkirk doesn’t get to play Saul Goodman again. Ray Wentworth is Saul after a purge of life and soul. He still drives a rubbish car, is down on his luck and is framed in Hopper-esque wide shots, but he is a poor cousin of the dirty lawyer with a heart of gold.

The film has an appealing weird streak running through it (I hope there really is an alternative bar only frequented by those working in the greetings card industry out there), but it feels chopped to bits and Lord knows what the message was supposed to be. I know it didn’t really matter what the inside of the Girlfriend card said, but it does matter what an audience was meant to feel at the end of this, and I mostly just felt bewildered.

Best of the bunch: I Am The Pretty Thing That Lives in the House, because it’s got a clear gameplan and artistry on its side. SSP

I'm not paid to write about film - I do it because I love it. Favourites include Bong Joon-ho, Danny Boyle, the Coen Brothers, Nicolas Winding Refn, Steven Spielberg, Guillermo del Toro, Taika Waititi and Edgar Wright. All reviews and articles are original works owned by me. They represent one man's opinion, and I'm more than happy to engage in civilised debate if you disagree.
View all posts by Sam Sewell-Peterson →
This entry was posted in Film, Film Review and tagged Aliens, Better Call Saul, Black Comedy, Bob Odenkirk, Coen Brothers, Girlfriend's Day, Home Alone, Horror, I Am The Pretty Thing That Lives in the House, James Badge Dale, Julie Kirkwood, Ladykillers, Netflix, Oz Perkins, Ruth Wilson, Spectral, The Big Lebowski, The Devil's Backbone. Bookmark the permalink.