Posted on February 16, 2017 by Sam Sewell-Peterson

You have to say this for Netflix: their original films are an eclectic mix of stories. Here’s my take on just three examples to be found on the ever more interesting and diverse streaming service.

TALLULAH (2016) Is TALLULAH anything more than an incessantly smug indie? Maybe a little bit more. A little bit.

Tallulah is mostly horrible and uninteresting people being horrible and uninteresting. Thank goodness Ellen Page is so charismatic because the character of Lu is unappealing from the off. Fine, do what you want to do with your life, be free, but who do you think you are chastising a loved one for missing their mother or wanting some stability in their life? She demonstrates basic human decency but is otherwise a selfish and irritating protagonist. Allison Janney is great of course, but that’s like saying water is wet. Speaking of water, character highlights for Margo include finding a release by  letting her divorce papers drift away from her in the bath then hastily hair-drying them in the next scene.

A privileged mother who it’s “hard to make excuses for”. The emotions of the film are honest, and so are the performances, but I’m not really sure what it’s trying to say beyond “people suck”. The film’s style is mostly naturalistic accept when people float into space, grounded until an upping of the stakes and a required suspension of disbelief at the sluggishness of the manhunt that makes up the film’s finale. It’s an interesting enough watch but I can’t say it had a major emotional impact on me. 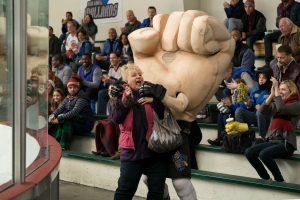 MASCOTS (2016) This is no THIS IS SPINAL TAP. You know what you’re going to get from a Christopher Guest project, but his fake rock doc really was lightning in a bottle and MASCOTS just isn’t.

There’s some nice low-key bittersweet commentary on anyone with passion for alternative lifestyles: “I got an honourable mention, which is like first place, but the weird first place”. Tom Bennett and Christopher Moynihan serve as the dual hearts of the piece and you care for their characters, even if there is little tension in the mascot competition itself where the former’s Hedgehog and the latter’s plumber put their all into routines for a tiny audience.

The channel interested in broadcasting the event, The Gluten Free Channel, “runs in over two cities nationwide” and never got over being branded “the channel that killed Santa Claus” after a stunt went awry. Darker jokes like this makes Mascots worth a watch, as do some pleasingly bizarre sights: a mascot funeral with an elephant in full costume lying in a coffin and a dance number with a plumber chasing a giant turd around a stage. Moments such as this are sadly few and far between, and while Guest doesn’t often do “laugh out loud”, in a comedy you do want more consistent laughs of any kind.

iBOY (2017) The graphics on show here may be outdated, but this little movie’s heart is definitely in the right place. iBOY may in fact be just the right superhero for this generation: a tech-savvy teen vigilante cleaning up the streets and finding his place in the world. Like Spider-Man without the spandex and the latest Apple products lodged in his noggin.

The film boasts two excellent and endearing performances from Bill Milner (SON OF RAMBOW) and Maisie Williams (GAME OF THRONES) and a gloriously incongruous one from Miranda Richardson as a kick-ass grandma. Yes, Miranda Richardson is now old enough to be playing someone’s grandma.

The first half of the film is a well-intentioned and pretty gritty chronicle of inner-city life with an awkward teen with tech powers taking the fight to the dealers who own his neighbourhood. The later stretch with a final showdown between iBoy and Rory Kinnear as an East End Kingpin (snigger) never really convinces, and you kind yourself wishing this could have manifested as a TV series giving characters more room to breathe. It’s zippy enough and the central relationships are likeable, but for all the swearing and violence towards teenagers, this could have been darker and more complex. SSP

I'm not paid to write about film - I do it because I love it. Favourite filmmakers include Bong Joon-ho, Danny Boyle, the Coen Brothers, Nicolas Winding Refn, Clio Barnard Steven Spielberg, Guillermo del Toro, Taika Waititi and Edgar Wright. All reviews and articles are original works owned by me. They represent one man's opinion, and I'm more than happy to engage in civilised debate if you disagree.
View all posts by Sam Sewell-Peterson →
This entry was posted in Film, Film Review and tagged Allison Janney, Bill Milner, Christopher Guest, Christopher Moynihan, Ellen Page, Game of Thrones, iBoy, Maisie Williams, Mascots, Miranda Richardson, Netflix, Rory Kinnear, Son of Rambow, Tallulah, This is Spinal Tap, Tom Bennett. Bookmark the permalink.