Posted on February 11, 2017 by Sam Sewell-Peterson 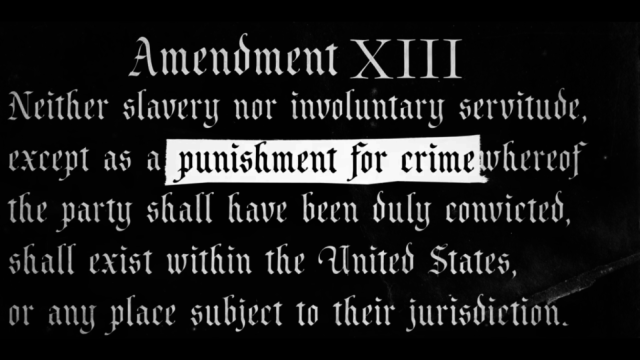 Nothing more needs to be said: Kandoo Films/Netflix

Anyone under the misapprehension that film can’t impact the real world, that it’s escapism and nothing more, should take note of the moment in Ava DuVernay’s documentary highlighting how DW Griffith’s THE BIRTH OF A NATION not only revitalised the Ku Klux Klan, but gifted them the powerful symbol of the burning cross. Nothing exists in a vacuum, and with 13TH DuVernay is using the medium of documentary filmmaking to send a powerful message about one of the great modern injustices in Western civilisation.

A chronicle of injustices committed as a result of the 13th Amendment to the American Constitution (1865), which abolished slavery but allowed for the large-scale abuse of the rights of prisoners, especially African-American males.

Decade by decade, administration by administration, we are guided through this ongoing travesty of discrimination. From Nixon’s plot to associate hippies and black people with the drug culture (since “we couldn’t make it illegal to be either against the war or black..”) to Reagan’s initiative to increase the penalty for dealing or using the derivations of drugs that inner-city black communities encountered. It’s not just Conservative Republican policies that are torn into either, with footage of a young Hilary Clinton using “super-predators” to describe young black men branded as criminals in the media and Democrat campaigns proclaiming a harsher stance on crime to effectively compete with the Republicans and thereby exacerbating existing societal problems and making a flawed justice system broken.

Aside from lobbying group ALEC’s big business connections promoting prisons as an enforced manufacturing industry, and a justice system that “treats you better if you’re rich and guilty than if you’re poor and innocent”, the media perhaps comes off worst of all here. The power “experts” and newscasters hold to warp and poison public perception of certain groups in society (even the way said groups saw themselves) by utilising power over a captive television audience cannot be underestimated. 13th chooses its arguments carefully, but there is more than enough of a pattern visible to judge informative TV as biased against black and ethnic minority communities. The types of stories reported relating to different groups is heavily skewed, and it’s telling that the only positive or socially aware media coverage in the documentary comes from late-night satirists.

“We don’t need to see pictures to understand what is going on” says one commentator. Images are powerful, they can be used as weapons of all sides, and just as they were, and are, used to make snap-judgements, they are being used to fight back, to expose atrocities to all. The collage wall of acts of police violence is perhaps the most powerful image in the documentary, DuVernay lingering and demanding justification.

The debate is presented through the prism of black voices and culture (the only way this story could or should be told) as provocative lyrics are emblazoned across the screen and the prison population ticks ominously upwards as time passes by.  We learn that 30% black males in Alabama still can’t vote because they hold a criminal conviction, so they can’t move on or give back. Punishment still dominates where reform would be more useful to America. Most shockingly, 1 in 3 black men are likely to serve time vs 1 in 17 white men, and this is a cycle difficult to break without reform of both legislation and mindset.

Nobody who made this documentary expected Trump to win. The clips of his hate speeches – presented a given that he would suffer a humiliating defeat – that were ultimately ignored by enough of the US population adds a real vein of bitterness and an innate tragedy to this story. There is much work to be done to redress the balance in society and citizenship in America, but it will not be done by the current incumbent. Those who watch 13th and have their eyes opened or their convictions reaffirmed and their resolve strengthened can still make a difference to their country and drive to fix their broken and unjust system. SSP

Writer and film fanatic fond of black comedies, sci-fi, animation and films about dysfunctional families.
View all posts by Sam Sewell-Peterson →
This entry was posted in Film, Film Review and tagged 13th, Academy Awards, Ava DuVernay, Documentary, Oscars, The Birth of a Nation. Bookmark the permalink.