Posted on December 8, 2015 by Sam Sewell-Peterson 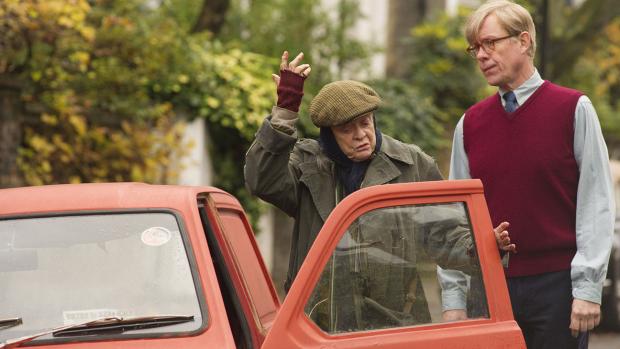 It’s always nice to sit back and watch a great actor do their thing. THE LADY IN THE VAN is often just that: Maggie Smith, Alan Bennett’s words. and a camera. You might not think Bennett’s stories would be particularly appropriate for film adaptation – internal monologues and modest interiors aren’t exactly inherently cinematic, after all. But when the story is this bizarre, poignant and funny, then you’ve got to ask, why not?

The comfortable Camden lifestyle of playwright Alan Bennett (Alex Jennings) is interrupted with the sudden arrival of the overbearing Miss Shepherd (Maggie Smith) a demanding and quite possibly mad homeless lady with airs and graces that defy where she finds herself in the world. How much will Alan let Miss Shepherd dominate his life, and is the writing she inspires a fair trade for her moving her hideous van onto his driveway?

As Miss Shepherd, Maggie Smith had to have both a well-honed comic sensibility (she is playing an unavoidably funny character) and also to mine a mountain of pathos as the character’s past comes to light (she is also playing an unavoidably sad character). There are both poo jokes at the story’s beginning and an aching dramatic crescendo at the story’s close. There is no limit to Smith’s versatility and she is very well-practiced in the role, originating it as she did on stage. Bennett himself is given not one but two voices, that of the introverted, thoughtful “writer” and the more disgruntled, confrontational “liver” (pun, I’m sure, intended). Alex Jennings equips himself admirably in both roles, stopping short of parody and making both Bennetts likable, flawed, and witty, and all of this achieved despite him not really looking much like Alan Bennett.

As Bennett self-deprecatingly describes the beginning of his latest work, “It’s not exactly Proust is it? It’s not even JB Priestley”. He does himself a disservice. Miss Shepherd, were she not a real person, would be a wonderful invention of a character. Something about the stage production I saw a few years back, despite the immediacy of it, left me a little cold. This film, despite the sometimes unnecessary fleshing out of who Miss Shepherd was and where she came from (in many ways she works better as an enigma)  affected me far more greatly. Bennett would be appalled.

Though the film belongs to Smith and Jennings, it is also packed with the cream of British acting talent, particularly those who have so successfully straddled stage and screen. Most of THE HISTORY BOYS cast have cameos, Jim Broadbent is great as a despicable and abusive retired policeman, and Roger Allam plays the ultimate cultured tosser who dismisses Bennett’s latest play as “That domestic…thing”.

It’s no surprise that Nicholas Hytner has been given the task of helming most of the Bennett film adaptations. After staging the writer’s work for many years and so confidently and sensitively transferring the UK’s favourite play The History Boys to film, who else would Bennett trust? While it’s mostly appropriately low-key in stylistic terms, Hytner does indulge a few showier (but not over-done) moments to accommodate Miss Shepherd’s outlandish personality and her unexpected god-fearing nature. While I do think it works better to meet her at the same time as, and with the same level of bewilderment as Bennett, I understand why he gave her past life more of an introduction here.