Posted on December 4, 2015 by Sam Sewell-Peterson 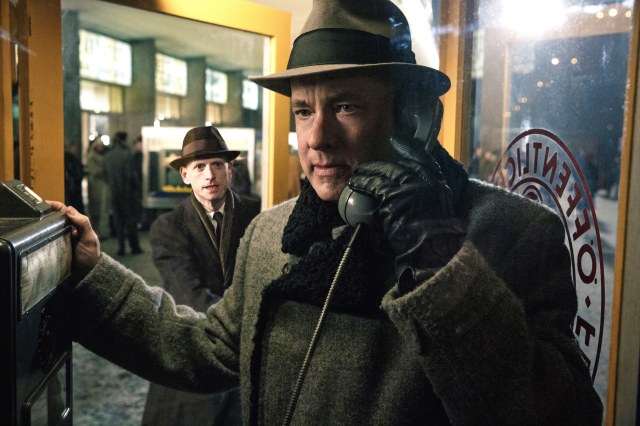 The thing about Steven Spielberg is that he’s consistent. A couple of clangers aside (and 1941 and A.I ARTIFICIAL INTELLIGENCE are at least terrible in interesting ways) you can usually rely on him to deliver something special. That goes double for when he’s telling a fascinating true story with plenty of substance, and BRIDGE OF SPIES is just that.

As the Cold War reaches its most fraught level, Soviet spy Rudolph Abel (Mark Rylance) is exposed on American soil. The American Constitution gives every man the right to a fair trial, and this unenviable task falls to insurance Lawyer James Donovan (Tom Hanks). Where as most would do their duty and nothing more, Donovan is determined to represent Abel well and secure a prison sentence instead of the blood the American public are clamoring for, lest the Soviets capture one of their own. Meanwhile, a top secret spy plane and its pilot is shot down over the Russian border…

Hanks is having a great few years. As James Donovan, he plays a man utterly dedicated to his profession and to his convictions. He takes on the monumental task of defending an enemy of the state and decides to give him the best representation possible, despite his friends, family, and the nation at large expecting him to do the bare minimum. That is not the man Donovan is. There is certainly something of Atticus Finch about him, a brilliant man in an impossible situation doing his job to the best of his ability. Following the various tribunals and prisoner exchange negotiations, Donovan traveled to Cuba on behalf of JFK to negotiate the release of prisoners from the Bay of Pigs debacle, which could be another film in itself.

Just give Rylance the Best Supporting Actor Oscar now, OK? The whole opening sequence is dedicated to Rudolph Abel’s calmness and attention to detail, and Rylance sticks to this unflappability throughout in his portrayal. He forms a compelling and unlikely friendship with Donovan, who understandably wonders why Abel isn’t acting more worried about his fate, and he simply inquires “Would it help?”

The film looks great in a very classical way. Every shot is carefully constructed by DP Janusz Kaminski, with oppressive high-contrast lighting for the scenes of Abel in prison, warm, sunny colour tints for New York, grey and dead for East Berlin. There are some lovely little details in the dressing of the recreated 1950s city streets, and in the Cold War paranoid homes and schools.

The Coen Brothers were brought in to give the already-excellent screenplay by Matt Charman a little added vim, and you can tell. Donovan’s rapid-fire back-and-forth with a G-man in a bar liberally using “Your guy/my guy…” and uncomfortable smiles is quintessentially Coen. We never really get the answers for what information Abel did actually feed the Soviets, or what damage he might have caused, only that he was a man doing his job, just like Donovan.

It’s a long film, but doesn’t feel it, which is a good sign. I liked that it’s not too weighty and downbeat. It’s dramatic and utterly engrossing, but it’s also quite funny at turns, and always very grounded in humanity. Donovan’s home life may be built around a traditional (almost) nuclear family, but they are an endearingly squabbling and flawed bunch. In a great scene around the dinner table, Jim tries simultaneously to console his daughter (Eve Hewson) who has just been stood up by a date; to explain to his son (Noah Schnapp) why everyone, even a communist deserves a fair trial; and break it to his wife (Amy Ryan) that he will be the man giving said communist that fair trial, putting a spotlight on their family.

A few moments were a little too on-the-nose for me though. Did we need to glimpse the building of the Berlin Wall as we pass through the city, or a juxtaposition of an atrocity in East Berlin with a idyllic moment back in the good old U S of A at the end? The film’s only action sequence, brief but high-octane also seems to have been transplanted from an entirely different movie.

The timely release of Bridge of Spies and the talent involved in the project makes it a little surprising it hasn’t done better at the box office so far. Trust me, it’s not a downer and it’s not hard work. It’s political and deals with serious subject matter, but in the most riveting manner possible, and with great performances, meticulous direction and elegant writing to support it. Overall it’s a very satisfying package and one well-worth checking out. SSP