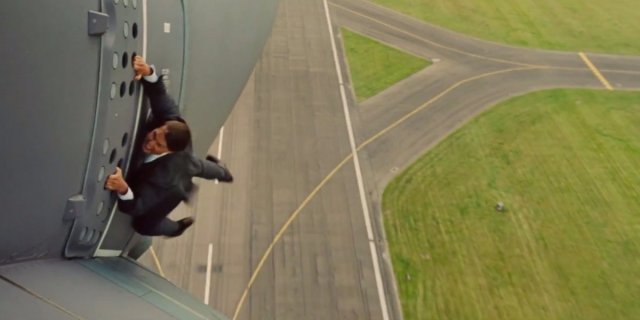 The latest outing for Ethan Hunt and the IMF is the most ambitious and technically accomplished to date. There really is very little to ruin your enjoyment of ROGUE NATION overall, and Christopher McQuarrie equips himself admirably as the latest caretaker of the MISSION: IMPOSSIBLE director’s chair.

Following his latest high-stakes mission, it becomes increasingly clear to Agent Ethan Hunt (Tom Cruise) that an unknown and malevolent entity with untold power and influence is behind a series of destabilising attacks across the world. CIA senior Alan Hunley (Alec Baldwin) sees the IMF as outdated, unregulated, and dangerous, and uses Hunt’s apparent paranoia about shadowy forces to disavow his team and drive them underground. Hunt must now reform his team in secret and contend with some deadly individuals with their own agendas to uncover the Syndicate.

Most of us are paying primarily to see Cruise do his thing, and he is still able to perform staggering physical feats for a man past 50. Rebecca Ferguson’s puzzle-box of a rival agent Ilsa Faust makes for a fascinating contrast, and foil, to Ethan Hunt. She wears some ridiculous outfits, and every time you scoff at whether she’ll be able to perform the action in them, then (after occasionally pausing to remove her heels) she does. She’s arguably an even more skilled, more deadly agent than Hunt, and certainly a more nuanced character – just look at the range of emotions that flash by in her eyes when she is informed her mission will not end any time soon. Simon Pegg’s Benji is still good value for money, and Jeremy Renner’s Brandt and Ving Rhames’s Luther make for an entertaining double-act even if the wider plot of the movie passes their characters by. Alec Baldwin plays his 30 ROCK character again, but in a different suit.

Sean Harris is essentially a far less flamboyant version of Javier Bardem’s baddie from SKYFALL, and they share pretty much the same backstory. That’s one thing that still baffles me – five movies in, and the Mission: Impossible franchise is still yet to produce a great villain. Philip Seymour Hoffman probably came closest in MISSION: IMPOSSIBLE III by the virtue of being the most interesting of the bunch. Ah well, maybe next time.

The plot is linear and rarely loses momentum, and pleasingly it doesn’t quite go where you expect it to. We’re provided with just enough tangents, just enough intrigue to keep our eyes glued. I didn’t even mind the shadowy-force-controlling-everything premise so much since they commit to the ridiculousness of it from the start rather than springing it on us as a ham-fisted twist later on (see: CAPTAIN AMERICA: THE WINTER SOLDIER).

The action is, of course, first-rate, and it’s the second extravaganza of the summer after MAD MAX to thrill through commitment to practical execution. There’s three massive set-pieces, opening with Cruise clinging by his fingernails to the exterior of a plane (giving us an alarming look at his perfect chompers in the wind); a second that progresses from “how many concealed weapons can you smuggle into an opera house?” to Cruise fighting for his life in time to the rhythm of the music; a third requiring him to hold his breath for three minutes in an elaborate underwater switcheroo – all nerve-shredding in their way, and all (mostly) real. My favourite sequence was the rather wonderful (and funny thanks to Pegg’s panicky human Sat Nav routine) car/bike chase through a packed Casablanca. Yes Cruise gets to ride a motorbike again, deal with it. There’s also a pretty nasty fight at the end of the film which, thanks to some meticulous lighting looks just like THE THIRD MAN, but with more stabbing.

Many critics have been hailing this as the best Mission: Impossible yet. I wouldn’t quite go that far. Though Rogue Nation is arguably the most consistently enjoyable of the series, I still prefer GHOST PROTOCOL for mixing up the formula with a little iconoclasm (the masks are, annoyingly, back here). All this globe-trotting and questioning the role of espionage in the modern world is seemingly ripped straight from a certain rival British spy series, but you don’t mind when it brings so much originality to the table in order to drop your jaw elsewhere.

Mission Impossible: Rogue Nation is confident, tactile, and extremely well-crafted, and a refreshingly straightforward thrill-ride to sit through. The mind boggles at what they’ll get Cruise to cling to next time to reaffirm his superhuman credentials, but I look forward to finding out. SSP