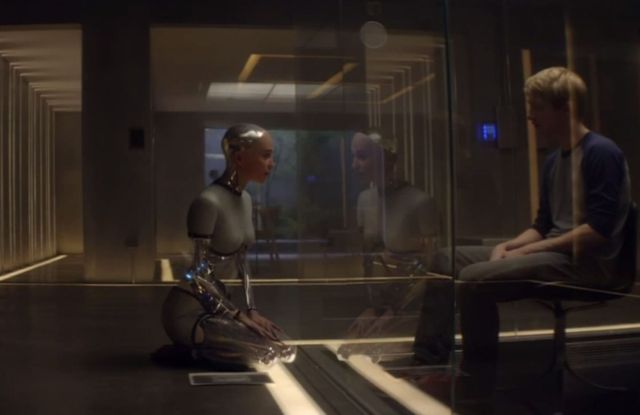 It’s about time a movie delivered on the promise of an AI thriller, particularly in 2015, a year with such disappointing offerings so far. CHAPPIE was underdeveloped to the point of stupidity, and AGE OF ULTRON was muddled and overstuffed. After proving himself as an accomplished writer for the likes of Danny Boyle over the last decade-and-a-half, EX MACHINA sees Alex Garland finally try his hand at directing, and what a debut it is.

When Caleb (Domhnall Gleeson) unexpectedly wins a competition to meet the reclusive founder of the technology company he works for, little can he guess what his trip has in store for him. Over the course of a week, Nathan (Oscar Isaac) uses his starstruck employee as a guinea pig for a unique experiment. Caleb’s mission is to conduct a series of Turing tests on Nathan’s artificial intelligence, Ava (Alicia Vikander), to find out whether or not she can fool others into thinking she is human. As the trio test each other, it becomes increasingly clear that everyone has their own agenda, and nothing is as it seems.

As well as fielding all the usual discussions that come with the concept of artificial intelligence – free will, what it means to be human etc – Ex Machina is also a great film exploring the twin themes of observation and control. From the very first shot Caleb is being observed, he is observed from the moment he meets Nathan and especially when he comes into contact with Ava and she starts to process his “micro-expressions”. Likewise, Caleb also observes Nathan and Ava constantly, always trying to figure out what their endgame is. In terms of control all three of our central characters are battling for it, manipulating each other to gain the upper hand. Revealing which of the trio eventually proves themselves to be the master manipulator would be a major spoiler, but suffice to say its enrapturing to find out. The plot is a constantly shifting chess game of a character piece.

For the most part we follow just three characters as they watch each other and we notice both major and minuscule changes in their behaviour as the situation shifts. The task facing three actors under such close scrutiny was not a small one, but Domhnall Gleeson, Alicia Vikander and Oscar Isaac are well up to the challenge. Gleeson and Isaac are both extremely good fits for their characters, playing them as good-natured everyman and charming, subtly creepy schemer respectively, but it is Vikander who makes the biggest impression as Ava. We’ve seen a lot of robots in movies, and a good number of them appeared almost human. Vikander could have gone the full ROBOCOP with stiff, controlled physicality, but she cannily instead has chosen to make Ava natural in all but a few of her movements. After a while, you can forget she’s an artificial being until a slightly odd change in expression or movement that doesn’t quite fit the rhythm of a real person gives her away. It’s subtle, sometimes barely noticeable, and all the more uncanny for it.

The film has an eerie, uncomfortable atmosphere throughout, but this is balanced with moments of extreme beauty and glimmers of welcome and unexpected humour. Here Garland has proven himself a talented director with a clear vision right out of the gate, but he is first and foremost a screenwriter, and the script of Ex Machina perhaps represents his finest achievement to date. It’s layered and intelligent without being overwhelmingly science-y, preferring to always bring focus back to observe how its three core characters behave in each other’s company or how they perceive their place in the rich tapestry of life. Much like Nathan refers to Caleb, the film’s dialogue is snappy and quotable, summing up its complex ideas succinctly in profound, brief statements rather than dreary monologues. Garland also indulges his love of left-of-field plot turns and steadily piling up the tension for a thrilling horror-tinged finale.

The film is aesthetically distinct and memorable, but is not concerned with dazzling with fireworks. Ava’s introduction is one of those moments on film that will stay with you. It’s not showy, in fact it’s rather understated. In wide shot, against a wide window she walks slowly into view in profile, her robotic innards revealed by the light shining through her. The plot quickly finds a contrivance for Ava to conceal her inner workings and in doing so save the film’s modest budget, but it makes sense with her character and also makes the occasions when we do see her laid bare all the more startling.

I could dig far deeper into the themes, character motivations and plot of Ex Machina, but trust me when I say you really don’t want to know any more before you experience it for the first time. It’s a sci-fi you want to go into cold to get the very most out of it. I’ve probably said too much simply by writing this review. See it, see it now. If you’ve already seen it, then see it again, then debate it with others – it can only become richer and more enthralling on multiple viewings and through intense debate.  SSP