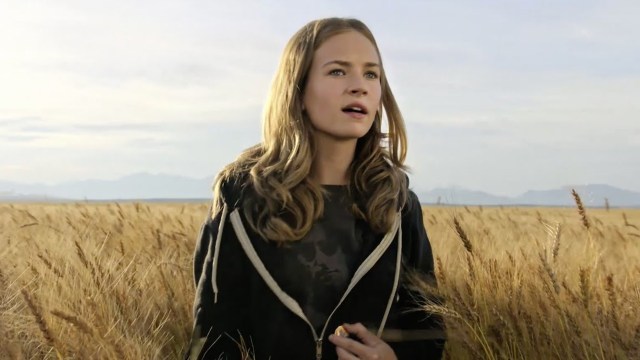 Thank goodness the concept of hope has returned to the summer blockbuster landscape. With TOMORROWLAND, Brad Bird may not quite have hit the dizzying heights of his previous movies, but he clearly relishes bringing back retro designs, fun action, endearing relationships, and generally taking science fiction back to a golden age where everything felt a little more positive.

Fifty years ago, idealistic boy inventor Frank Walker (Thomas Robinson) found his way to a secret utopian world. Now, through a series of unlikely events, razor-sharp teen delinquent Casey Newton (Britt Robertson) is brought together with the adult, turned cynical and shut-in Frank (George Clooney) and both embark on a quest to return to Tomorrowland and perhaps save their own world in the process.

This is a pretty straightforward plot, particularly by Damon Lindelof’s usual standards. With the dimension-traveling, the contrast between the drab and the vivid and the strong female characters it’s essentially THE WIZARD OF OZ with a sci-fi twist, but here they spend a lot longer getting back to the colourful other world.

Bird and his team have assembled a seriously good cast. I adored Casey as a character, she’s intuitive, funny and impulsive, she bungles and slips but always lands on her feet and always strives to do the right thing, and Britt Robertson has charisma to rival her A-List co-star. It’s good to see Clooney take the plunge with a project of this scale again, and the grouchy genius with a heart of gold role fits him like a glove. Raffey Cassidy is a scene-stealer as Casey and Frank’s guide Athena, and manages to remain interesting despite being lumped with a lot of the film’s exposition by being consistently exceedingly odd. It’s nice to see Hugh Laurie wearing his native accent again, and he lends gravity to David Nix, also making him understandable and amusing as well as frightening, as every great baddie should be.

Disney must have been thrilled that they’d just acquired Lucasfilm and STAR WARS, and the iconic imagery, sound effects and music they were therefore free to use in a key scene in a sci-fi collectables shop (Bird also smuggles in a few references to his own IRON GIANT). Brad Bird isn’t one for showing off with his camerawork or editing, but he does indulge his production designers to let their imaginations run wild and produce something pretty wondrous on a visual level. Jetpacks, steampunk rockets and multi-leveled bubble swimming pools suspended in mid-air are just some of the marvels on show.

It’s great to see a load of good old-fashioned slapstick in a big movie again. Robertson has great physical comic timing and Casey does get knocked around a fair bit, often as a result of her lack of awareness of her own surroundings. The action is flawlessly executed with great rhythm and gags aplenty to punctuate it. This particularly comes across in arguably the film’s most successful scene – Casey and Frank escaping the inventor’s house as booby traps spring out from the floors and walls like a depraved take on WALLACE AND GROMIT to take out their evil robot pursuers.

Sometimes telling the viewer about the themes of the film can be a little on-the-nose. Both Clooney and Laurie literally list off everything that is wrong with our modern world (the latter in a more amusing manner). I also found that what is in essence a linearly satisfying story takes one too many tangents, seemingly only to delay our return to Tomorrowland for another few minutes, and once we finally reach to the apparent utopia it wasn’t immediately clear what our heroes were actually trying to do beyond stopping the bad guy.

It’s a lovely sentiment to want to fix everything wrong with our world. Even if we do not have any immediate solutions to turn back the damage humankind has wrought, to have the drive to do something, anything, to heal it, it’s an admirable worldview. To stay positive and believe things can and will get better is something we could all strive for. It apparently hasn’t smashed the box office, which might suggest, depressingly, that the world doesn’t really like happy science fiction. What a bunch of misery guts.

The film might not be quite as deep as some might want their sci-fi to be. The big ideas are there, but generally in the background and not discussed in all that much detail. Bird and Lindeloff don’t put forward any real solutions to our current predicament beyond blind hope and working together for a better tomorrow. But that’s fine sometimes. Tomorrowland is a good ride with a sincere message and simple pleasures. Every now and again, you have to ask yourself – much like young Frank Walker does of David Nix in the opening scene – “can’t something just be fun?” SSP