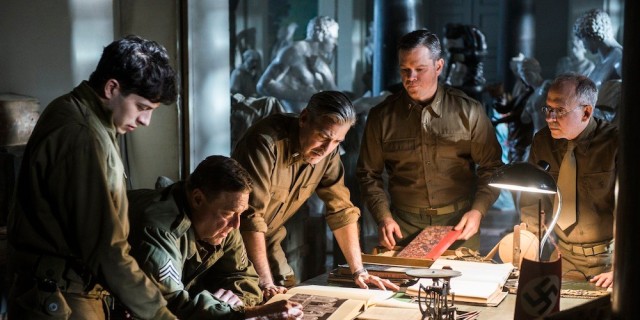 THE MONUMENTS MEN is an all-star ensemble period comedy-drama directed by George Clooney. It should be great, but doesn’t quite get there despite the good intentions behind it and the abundance of talent involved.

The year is 1943, and Hitler’s forces are being driven back in Europe by the combined efforts of the Allies. Seizing on this opportunity, Frank Stokes (George Clooney) is given the go-ahead by President Roosevelt to form a team of art experts to go to Europe with the US army and rescue significant pieces in Nazi hands, thereby preserving Western culture for future generations. Stokes recruits to his “Monuments Men” old friends James Granger (Matt Damon), Richard Campbell (Bill Murray) and Donald Jeffries (Hugh Bonneville) as well as Walter Garfield (John Goodman), Preston Savitz (Bob Balaban) and Jean-Claude Clermont (Jean Dujardin) – between them they possess an impressive range of knowledge of painting, sculpture and architecture, and are all determined to liberate a particular masterpiece from the Reich. Meanwhile, in Paris, curator Claire Simone (Cate Blanchett) watches helplessly as her city is gutted of its culture by the Nazis.

None of the central cast seem to really be playing characters, but rather caricatures of themselves based on a well-known trait of their public persona or the archetypes they usually play. George Clooney is the leader, Matt Damon the well-meaning nice guy, Bill Murray the sarcastic one, John Goodman the jolly loud one etc. Hugh Bonneville and Jean Dujardin don’t even get character traits, but nationalities (not American) which of course makes them vulnerable in a way foreigners only ever are in Hollywood movies. Thank the Lord for Bob Balaban, the only real character with more than one dimension – snarky, bitter, resentful, possibly slightly psychotic, and hugely entertaining. Cate Blanchett is good as well – stoic, driven and dignified, but it’s a role she could do in her sleep. I think I’ll just refer to the cast by their names rather than their “characters” for my ease of mind from here on.

The film’s title appears onscreen in conjunction with Murray (looking at Damon and Clooney, but staring straight into camera from the viewer’s perspective) giving a salute with a completely straight face and an inspirational tune playing in the background. I think this was supposed to be taken seriously, but sadly it can’t not be funny. Because of his deadpan comic style, Murray trying to act serious is often funnier than Murray acting in an obviously comedic fashion. Damon’s character is introduced lying on his back in order to paint a mural on the ceiling. Just in case this gag is too subtle, Clooney helpfully quips “There’s a Michelangelo joke to be made”.

They found actors who look an awful lot like Goering (Udo Kroschwald), Truman (Christian Rodska), even, briefly, Hitler (James Payton), but seemingly couldn’t be bothered to find a convincing Roosevelt, as the actor playing him (Michael Dalton) is only shown from behind, with cigarette holder in hand (in case we’re in any doubt about who he’s meant to be, Clooney helpfully addresses him as Mr. President). It’s a small thing, but seems a bit of a waste considering the effort the casting team have made finding doppelgangers for the other historical figures.

There’s a smattering of decent jokes to enjoy – Bonneville smoking like a chimney during his medical examination, and his doctor doing the same; Damon butchering the French language; Murray and Balaban’s hate-hate relationship. There’s also a few well-judged emotional beats you can’t help but be affected by – a key character’s dignified death doing his duty; the imprisonment of a frightening number of teenage members of the Nazi-sympathising Milice by the Allies; a warehouse full of mountain-upon-mountain of Jewish possessions; an unexpected Christmas message from home. Of course, Clooney gives the film’s central inspiration speech about culture, history, the human spirit (all the good stuff) as his team listen intently while gathered round a campfire, and a mournful, simple piano theme plays over the top. You fully expect this scene, you get it, it works.

There’s a scene with an American officer being (justifiably) angry at being asked by Clooney to put further lives at risk by making a last-minute change to his battle strategy just to protect some artwork, but it’s almost like we’re being asked to feel bad for the Monuments Men hitting this setback, that they’ll have to face their mission alone, rather than considering the wider implications – that there were actually people in WWII who considered art worth dying for. An almost identical scene comes later when Bonneville asks the same thing of his British superior.

The film has lengthy scenes involving German, French, and Russian speakers speaking, appropriately, German, French, and Russian. It still annoyingly occasionally lapses into that old Hollywood shortcut of characters speaking English with silly accents. This is especially odd when so much effort to use the appropriate language is on display elsewhere, even to the extent that someone has translated Damon’s French dialogue intentionally badly for comic effect.

It’s dumfounding that this is the first time the story of these remarkable men has been told onscreen, as it’s a tale worthy of telling. It’s odd, though, that George Clooney still chose to change the names of the characters involved, since the main aim of the film seems to be to make the world recognise their extraordinary achievements. In their adaptation of Robert M. Edsel’s book about the Monuments, Fine Arts, and Archives Programme, Clooney and co-writer Grant Heslov have retained the key events in broad strokes, but decided to re-name the real George Stout to Frank Stokes (as played by Clooney) and even more strangely, changed just the surnames of Damon and Goodman’s characters. Surely the filmmakers would like us to know the real names of the individuals the film is built around?

With the best will in the world, the most positive thing I can say about the film as a whole is that it’s a undemanding and pleasant. It looks at an obscure aspect of a major historical event through a rose-tinted lens, and really it’s a product of a past era of filmmaking along with films like THE GREAT ESCAPE that’s somehow been released in 2014. It’s not quite funny enough to be an outright comedy, and it’s certainly not thoughtful enough to be anything else. It’s a little narratively messy to begin with, but finds its feet and focus towards the end, and will make a pleasing enough watch in the near future when it’s rerun endlessly on weekend afternoon television. SSP