Posted on November 28, 2013 by Sam Sewell-Peterson 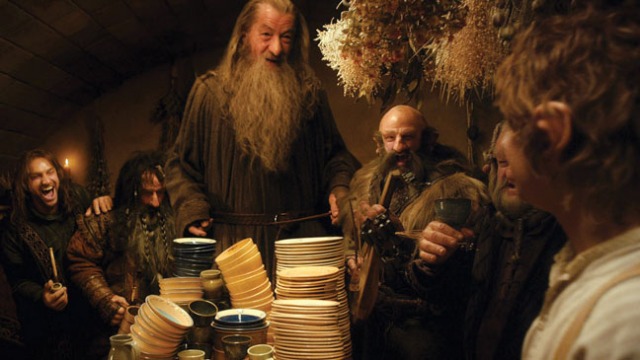 Who didn’t see this coming? This month Peter Jackson released a special extended cut of THE HOBBIT: AN UNEXPECTED JOURNEY just in time to promote the second chapter, THE DESOLATION OF SMAUG, which is set to be released in cinemas in just under a month.

Jackson is a canny marketer, and a lover of showing the audience everything filmed at some point, even if it was initially left on the cutting room floor. Cynics might declare Jackson greedy for sticking to this release strategy (used in all three LORD OF THE RINGS films and KING KONG) and there may be a bit of a profit-driven incentive, but when you see what these new scenes can add to the film overall, in addition to the hours of detailed special features, you can’t begrudge Jackson much.

The first part of The Hobbit (if you somehow don’t know the story) sees the comfort-loving Bilbo Baggins (Martin Freeman) recruited by the wandering wizard Gandalf (Ian McKellen) to join a party of displaced Dwarves seeking to reclaim their treasure and their homeland. Their quest features encounters with trolls, stone giants, goblins and vengeful orcs, and builds on Tolkien’s well-trod themes of greed, loss and bravery. Not bad for an adaptation of a throwaway children’s book.

That’s one thing we have to remember, that J.R.R. Tolkien saw The Hobbit as something to keep youngsters amused, and it was only later he narratively tied it to the epic and layered Lord of the Rings Trilogy. The Hobbit is appropriately completely different in tone. There’s more humour, lightness and singing, and that goes double for the Extended Edition. Sadly, many of the more comical scenes, the ones that don’t move the plot along but still add something to our perception of the characters. Restored, they do add something (not a lot, but something), and it’s pleasing to have all the musical interludes and dwarf skinny-dipping back in the film.

In both cuts of the film, Martin Freeman steals the show. No-one else could fit so effortlessly into the furry feet of Bilbo Baggins. He’s always had great comic timing, but he also brings real warmth and some entertaining early-onset curmudgeoniness to his portrayal of Mr Baggins. Ian McKellen is again reliable as Gandalf, Sylvester McCoy has a lot of fun as the weird and wonderful Radagast and Ken Stott’s Balin and James Nesbitt’s Bofur stand out among the company of dwarves (the rest of them are still a bit of a blur at the moment). Andy Serkis makes a welcome return with his (presumably) final performance as Gollum, and the tricksy little blighter has never looked or sounded better than he does here, in the perfect adaptation of “Riddles in the Dark”.

A lot of criticism has been levelled at Jackson expanding a relatively short book into three films, but as Gandalf says, “all good stories deserve embellishment”. Maybe Jackson has embellished too much, as there are entire sequences that feel either unnecessarily drawn-out, or unnecessary full-stop. To an extent I understand the purpose of the Dwarf-focussed prologue – it’s there to set up plot points and character motivations that will doubtless pay off later, and it seems to intentionally echo the first scenes of THE FELLOWSHIP OF THE RING, but why did it have to be so long? Thorin’s drive, and the threat of Smaug could have been established in a couple of brief flashbacks, and then the main story could have been underway a little quicker. I don’t see any need for Azog (Manu Bennett) a big, CGI-assisted orc and nemesis to Thorin – no-one needs a reason to hate orcs, to have one commit a personal grievance to you, they’re the embodiment of evil! His addition is just an excuse for the addition of a couple of unmemorable action sequences with way too much heroic slow-motion.

Of course, you buy Peter Jackson’s special editions for the special features, and you’ll be pleased to hear there’s a truckload. Hour after hour of in-depth documentaries cover everything from casting to costume and makeup design to Christopher Lee’s long anecdotes the crew were too polite to ignore. This is what makes the purchase worth while, and incredible value for money, rather than the extra 15 minutes or so of new footage.

Ultimately, the extended cut of The Hobbit part 1 doesn’t improve a lot on the theatrical cut. It has the same strengths (humour, warmth and riddles) but suffers from the same drawbacks (pacing, repetition, excessive action). The new scenes are nice, but not essential viewing (unlike some of the key scenes exorcised from LOTR). Do buy it for the dragon’s hoard of extras though, you won’t be disappointed…or be likely to see daylight for a while. SSP

Writer and film fanatic fond of black comedies, sci-fi, animation and films about dysfunctional families.
View all posts by Sam Sewell-Peterson →
This entry was posted in Film, Film Review and tagged Extended Edition, Fantasy, Film, Ian KcKellen, King Kong, Lord of the Rings, Martin Freeman, Movies, Peter Jackson, The Fellowship of the Ring, The Hobbit: An Unexpected Journey, The Hobbit: The Desolation of Smaug, Tolkien. Bookmark the permalink.

3 Responses to Review: The Hobbit: An Unexpected Journey Extended Edition (2013)