Posted on September 9, 2013 by Sam Sewell-Peterson 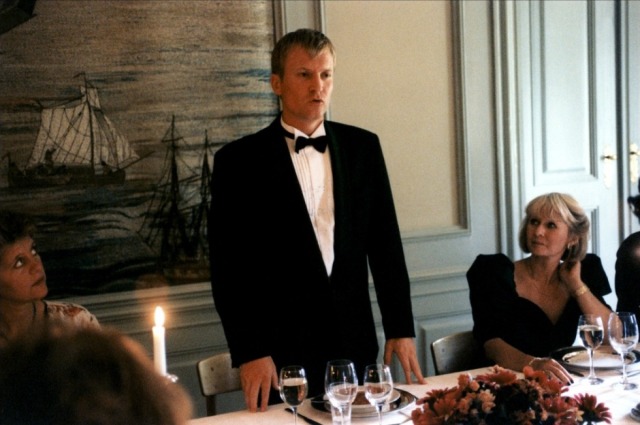 This review was originally written for Subtitled Online August 2010.

FESTEN was the first film released following the Dogme 95 “Vow of Chastity”. The rules included technical restrictions (cameras to be low quality and handheld, no sound or music to be added in post-production) banning of excessive action, and not allowing the director a credit. The whole Dogme movement aimed to reduce cinema back to its simplest and most beautiful origins.

Festen opens with the Klingenfeldt-Hansen family traveling to the family-run hotel for a celebration. We are introduced to each family member on their arrival – Helge (Henning Moritzen) is the father, whose 60th the family has gathered to celebrate. His children are Christian (Ulrich Thomsen), the quiet and distant eldest son; the volatile and manic youngest child Michael (Thomas Bo Larsen) and Helene (Paprika Steen), the fiery and confident eldest daughter.

Also mentioned in conversation is the recently deceased youngest daughter, Linda, who committed suicide seemingly without motive, and for whom the family are still mourning. Helene visits her late sister’s room and finds a note. Michael has a violent and sexually charged argument with his wife, and Christian is re-acquainted with his childhood sweetheart, Pia (Trine Dyrholm).

The evening celebrations begin normally enough – catching up with the relatives, then a civilised sit-down meal, too much wine and clichéd speeches. Everything changes when Christian stands to make his speech. He makes a horrifying claim about his father that sends the party into uproar, and is promptly ejected from the party. We spend the rest of the film searching for the truth. Are Christian’s claims true? And why did Linda commit suicide?

Festen shows you incredibly dark family drama at its very best. Thanks to Vinterberg’s down-to earth screenplay (which is so natural, it appears improvised at times), we instantly warm to (or at least empathise with) the characters, and can easily relate to them and what they are going through.

The film is a truly immersive experience, and due to the low-grade quality of the film – in compliance with the Dogme 95 rules – it looks like a home video, and through watching it you really feel like a member of the family, like you’re taking part in the festivities.

Be warned, though – Festen is by no means a comfortable viewing experience. Emotions run high throughout, and the dark family secrets revealed are truly shocking. Each revelation feels like a punch to the stomach, and just when you think it could never get worse, it does.

High quality acting is on show, both from the veterans (Henning Moritzen has been acting since the 1950s) and the novices (it was one of Paprika Steen’s first major film roles) and they all bring a little extra something to their characters. Of particular note are the actors who play the siblings – Ulrich Thomsen manages to bring across the tragedy and deep-rooted emotional scarring of Christian; Thomas Bo Larsen gives Michael just the right level of unpredictability and menace, while at the same time showing his unquestionable loyalty to his family; and Paprika Stern is captivating as the strong, independent woman amongst a family of flawed men.

The Dogme 95 rules that Festen follows (at least for the most part) will most definitely divide audiences. Your view of the whole film may entirely hinge on whether you see the vow of chastity as being restrictive or liberating, as overtly pretentious or refreshingly simplistic. Some of the Dogme rules could seem a little bizarre and needless to some – the cast, in theory at least, have to provide their own costumes (though the Festen crew did allow a cast member who did not own a tuxedo to borrow one), but others achieve interesting effects within the film. For instance, a scene with Michael and his wife in their hotel room required a swooping, high angled shot, and since the Dogme rules prohibited the use of cranes or steadicams, the cameraman attached his camera to the end of a mic boom (which, amusingly, can be briefly seen in a mirror in the room). The film also required cast members themselves to film some scenes, notably the dining room scene, which otherwise would have been far too awkward to achieve some shots in such a confined space.

Whether you’re a lover or a hater of Dogme, Festen will take you on an emotional rollercoaster that enthrals you throughout. In an age of big-budget, high concept filmmaking, it makes a nice change to watch a film so stripped down, yet so immensely satisfying. SSP