The Best Film I’ve Seen This Year: The Way Way Back

Posted on September 2, 2013 by Sam Sewell-Peterson 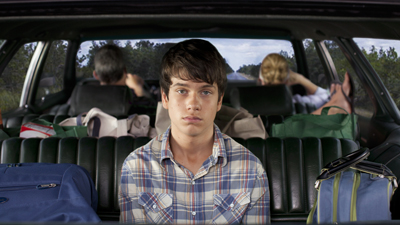 You don’t often see comedies like THE WAY WAY BACK today, and that makes me sad. I’m tired with overblown, excessive, abrasive humour on film.

The Way Way Back, co-written and directed by Jim Rash and Nat Faxon is pretty much the polar opposite of the type of studio comedy movie that makes big money, usually by relying on elaborate comic set pieces (THE HANGOVER, BRIDESMAIDS, TED etc.) – it’s an independent, small-scale, personal and achingly honest tale of growing up. Not just the journey from adolescence to adulthood, either – the grown-ups have a lot of maturing to do too!

We follow Duncan (Liam James) a 14-year-old introvert who’s dragged on holiday with his mother (Toni Collette), her new boyfriend Trent (Steve Carell) over the summer. Duncan just wants to be left to his own devices, but Trent insists on making him join in with the “family fun”, continually belittling and humiliating him in the process. While seeking solitude from his torment, Duncan meets a local slacker Owen (Sam Rockwell) who runs the local, slightly crappy water park, and strikes up a fast friendship with him. The rest of the film is a series of tonally contrasting sequences, with Duncan having a utterly miserable time with Trent and his grating middle-aged friends, or enjoying the liberation the water park offers him, body and soul.

The story is an old one – countless films following shy teens learning to come out of their shell already exist – but they’re rarely as earnest and true to life as this. Born out of a childhood experience of Jim Rash (co-writer/director with Nat Faxon) which is replicated in the movie; when Trent bullies Duncan into rating himself on a scale of 1-10 before crushing his confidence, The Way Way Back always feels real and completely relatable, especially if you’ve had similar experiences growing up. From the very first, hugely uncomfortable (though darkly funny) scene, we’re part of this world. We recognise the situations, and they’re poignant and amusing.

Comparisons have been made to other Independent North American bittersweet comedy dramas of the last decade – LITTLE MISS SUNSHINE, JUNO, NAPOLEON DYNAMITE, AWAY WE GO etc. There’s certainly an element or two of these films in The Way Way Back (notably sharing the cast of Little Miss Sunshine), and I’m sure Rash and Faxon were influenced by them. It’s also obvious that these are the same minds behind the Oscar-winning screenplay for THE DESCENDENTS – the Alexander Payne-directed George Clooney vehicle had moments of extreme darkness but also of incredible hilarity. For every examination of life and loss, you have Clooney flapping down the street in sandals or creepily (and not so subtly) spying on neighbours. The Way Way Back also reminded me of a recent British film – Richard Ayoade’s SUBMARINE, which again follows an awkward, dour teenager struggling to find his place in the world.

The Way Way Back does indeed feel like a tribute to the last decade of a certain kind of comedy film. It also feels like a tribute to another time (though the film’s time setting isn’t concrete), a time when growing up wasn’t better or worse, simpler or more complicated, just different. Nostalgia can be a powerful tool in the right hands, but The Way Way Back leaves its own mark with good performances (particularly from the likeable Rockwell, the talented young James and the filthily funny Janney) as well as naturalistic scripting, and a large helping of heart throughout. We’ve all had one of those summers, back when the seasons seemed to last forever. The film made an impression on me, and made me wonder why more people don’t make movies like this any more – perceptive, feel-good, human experiences. Why does comedy always have to be cruel, loud, shocking or excessive? Why can’t it be quitter, gentle and heartfelt?

The Way Way Back is my film of the year so far, for its unashamed old-fashioned-ness and the emotional connection it made with me, an eternally awkward soul, as much as its long list of filmmaking merits. SSP