Posted on September 2, 2013 by Sam Sewell-Peterson 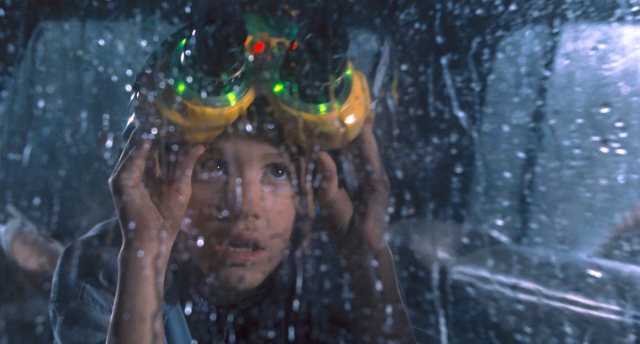 I’ve loved JURASSIC PARK since I first saw it in the cinema as a small child. It’s a magical experience for me, and shows the real majesty of special effects work (both animatronic and CGI) when they’re done well. I was lucky enough to see it on the big screen again the other year, and last Sunday I went to see it again in IMAX 3D. So, 20 years on, and with a new visual gimmick, how does it hold up?

In short, pretty well. The effects are only just starting to show their age after two decades, the set pieces are still amazing, Michael Crichton and David Koepp’s screenplay retains enough of Crichton’s source material while streamlining the rest into an engaging, entertaining thriller. It’s still a very well put together family monster movie all-in-all.

I’m still fond of the cast too – Sam Neill, Jeff Goldblum, Richard Attenborough, Bob Peck, Wayne Knight, Samuel L. Jackson and especially the brilliant Laura Dern – it’s a great cast, the character relationships work and everyone is allowed to play to their strengths.

So, how well does the 3D work? Not particularly well, to be brutally honest. It’s not the quality of the transfer that’s the problem – the big effects sequences and the Hawaiian (sorry, Ilsa Nublar) landscapes look the best they ever have with the added visual dimension. But the problem here is Steven Spielberg’s original directorial decisions. He chose to shoot the vast majority of the dialogue scenes, and some portions of the action scenes in close or extreme close-ups. In a regular 2D film, this is fine. The events on screen feel more immediate, you notice the slightest change in an actor’s facial expression in response to their current situation. But in 3D, post-converted close-up shots don’t really work. Everything’s just too big – you find yourself really straining to keep anything but the actor’s nose in focus and the overall effect is just disorientating.

I also never noticed before how many shots of characters below the waist there are. Between the crouching, running, jumping and climbing I found myself mostly looking at people’s behinds in 3D when I wasn’t trying to focus on someone’s nose. But at least the dinosaurs look awesome with the added dimension, and that’s what really matters.

It’s never been a perfect film; there will always be plot holes, a few lines of dialogue that fall flat, loads of exposition and two really annoying kids. But in return you have mind-blowing dino-antics, fun performances from the adults and one of John Williams’ finest ever scores.

I still adore Jurassic Park, and was glad to see it again on a massive screen, but wasn’t overly impressed with the 3D-ifying. I sincerely hope every future anniversary/nostalgia re-release doesn’t have to come with this gimmick (seeing JP again in the cinema again without those glasses was far more rewarding). Still, it’s worth a look if you have the chance. SSP

I'm not paid to write about film - I do it because I love it. Favourite filmmakers include Bong Joon-ho, Danny Boyle, the Coen Brothers, Nicolas Winding Refn, Clio Barnard, Steven Spielberg, Guillermo del Toro, Paul Verhoeven, Taika Waititi and Edgar Wright. All reviews and articles are original works written and owned by me. They represent one man's opinion, and I'm more than happy to engage in civilised debate if you disagree.
View all posts by Sam Sewell-Peterson →
This entry was posted in Film, Film Feature, Film Review and tagged 3D, Blockbuster, Film, Jurassic Park, Laura Dern, Monster Movie, Movies, Sam Neill, Sci-fi, Steven Spielberg. Bookmark the permalink.